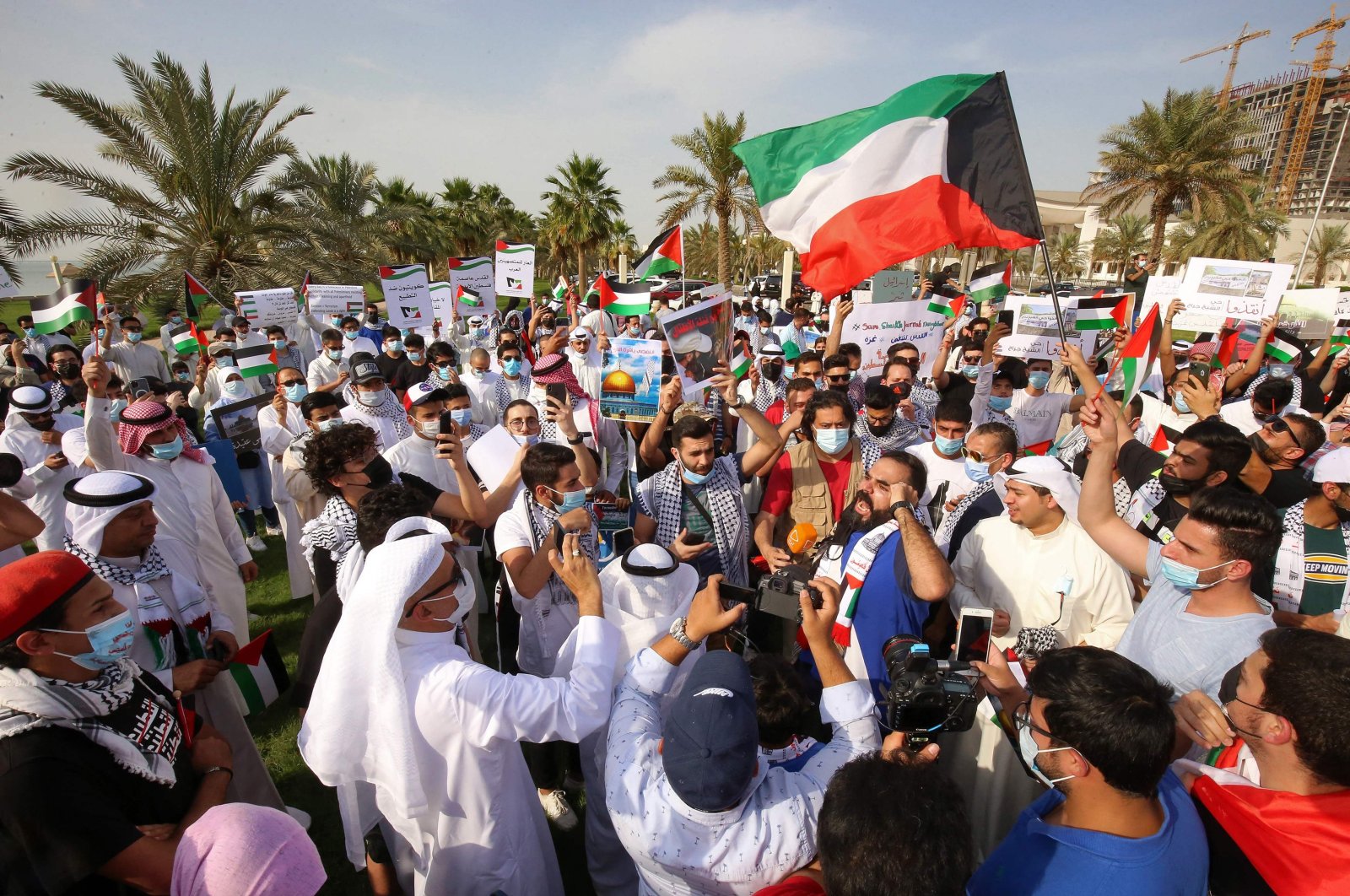 Kuwaitis chant slogans during a protest in solidarity with the Palestinian people, Kuwait City, Kuwait, May 11, 2021. (AFP Photo)
by French Press Agency - AFP May 17, 2021 4:17 pm
RECOMMENDED

Kuwait summoned the ambassador of the Czech Republic in the Gulf country Monday following a social media post in support of Israel stirred nationwide online criticism.

This comes as Israeli airstrikes continued to hammer the Gaza Strip after a week of violence that has killed more than 200 people, the large majority Palestinian.

Martin Dvorak uploaded on his personal Instagram account an image of himself, with an Israeli flag, along with a statement that said: "I stand with Israel."

On Monday, he deleted the post and issued a letter of apology that said he was "extremely remorseful."

The foreign ministry of Kuwait said it summoned the ambassador earlier that day to express their "absolute rejection of his actions that go against the nature of his diplomatic position."

It said in a statement that the ministry "categorically rejects and strongly disapproves" of Dvorak rhetoric on his personal Instagram account.

Dvorak said in the letter uploaded on the embassy's Twitter account that "it was extremely insensitive of me toward the feelings of many of my close Kuwaiti and Muslim friends, and I want to apologize to them, as well as to all Kuwaitis and Palestinians, and to anyone else who feels aggrieved by this."

Thousands of Kuwaiti residents took to social media to express their discontent, with some calling for Dvorak's departure, along with the hashtag #FreePalestine.

"It is not enough to apologize. The ambassador should be expelled," said one Twitter user.

Another commented on the ambassador's Instagram account saying, "Think twice before you support a country that kills children."

"You are not welcome in Kuwait" and "shame on you," others said.

In the past week, Kuwaiti residents have held multiple protests in support of the Palestinians. Another demonstration is expected to take place Monday.

The renewed Israeli airstrikes Monday come a day after 42 Palestinians in Gaza – including at least eight children and two doctors, according to the health ministry – were killed in the worst daily death toll in the enclave since the bombardments began.

In total, 198 Palestinians have been killed in Gaza, including at least 58 children, and more than 1,200 wounded since Israel launched its air campaign against Hamas May 10.