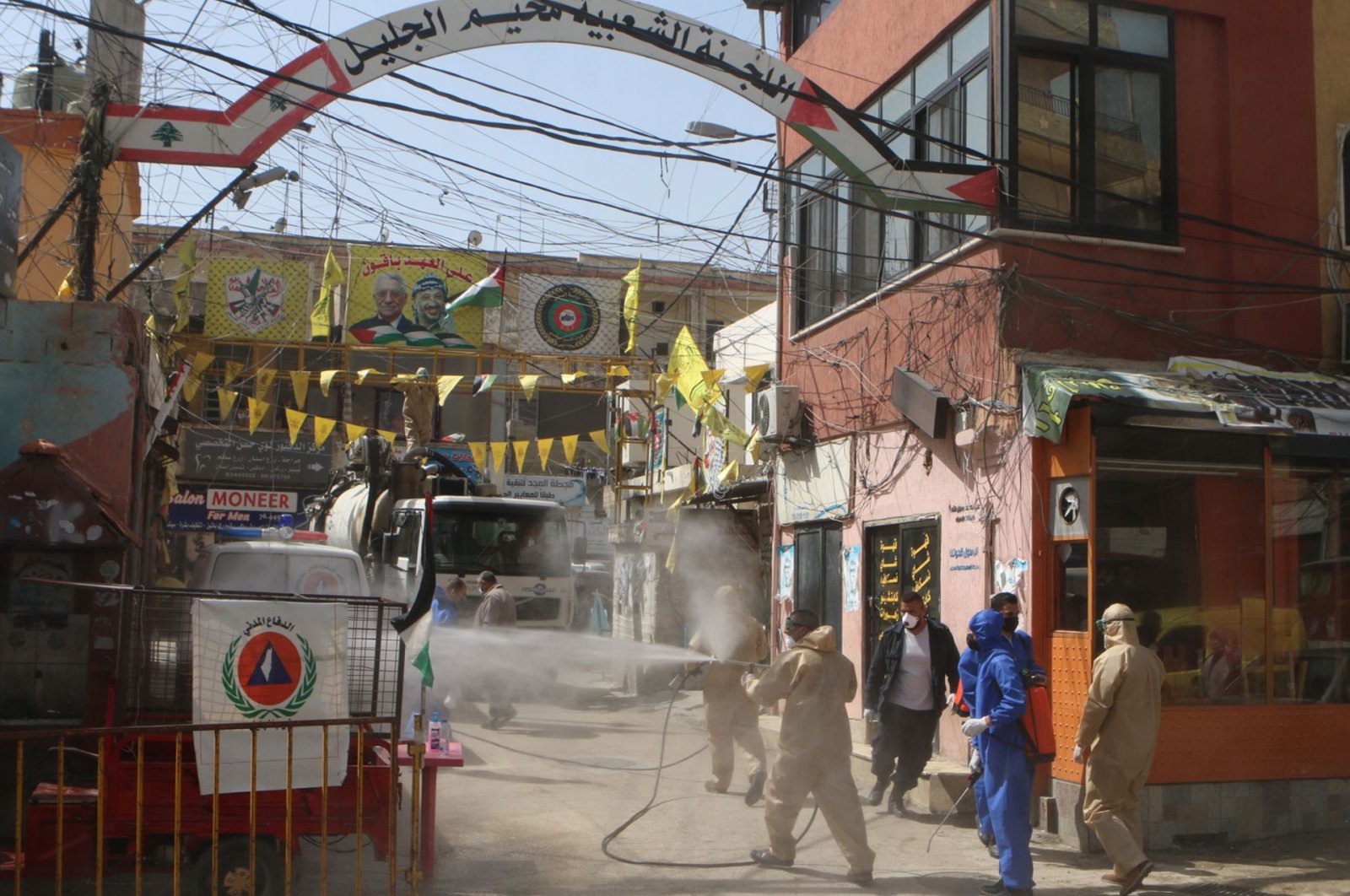 Workers disinfect the Wavel camp (also known as the Jalil Camp) for Palestinian refugees in Lebanon's eastern Bekaa Valley, on April 22, 2020, after the UN announced the first confirmed case of coronavirus there. (AFP Photo)
by Associated Press Apr 22, 2020 1:50 pm
RECOMMENDED

A Palestinian woman from Syria has become the first refugee living in a camp in Lebanon to test positive for the coronavirus, the United Nations agency for Palestinian refugees and the Lebanese health minister said Wednesday.

The agency, UNRWA, said the woman lives in one of the camps in eastern Lebanon's Bekaa region. It said all necessary measures have been taken and the patient was transferred to the government-run Rafik Hariri Hospital in Beirut, adding that the agency will cover the entire cost of her treatment.

Lebanon is home to more than 1 million Syrian refugees and other Syrians who are residents. It is also host to tens of thousands of Palestinian refugees and their descendants, most of them living in squalid camps with no access to public services, limited employment opportunities and no rights to ownership.

The tiny country has recorded 22 deaths from among 682 confirmed cases of COVID-19, the illness caused by the virus. They include one Palestinian who lives outside a camp, and three Syrian residents who have tested positive. Wednesday’s announcement was the first involving a refugee living inside a camp.

Lack of testing has stoked fears among millions of displaced people around the world packed into refugee camps and informal settlements. Wednesday's announcement sparked concern in Lebanon, where human rights groups have long decried discriminatory measures against refugees.

Most people who become infected experience mild to moderate symptoms. But the virus can cause severe illness and lead to death, particularly among older people and those with underlying health problems. It is highly contagious and can be spread by those who appear healthy.

UNRWA said it will take a team from the Rafik Hariri hospital to the Wavel camp in the Bekaa's Baalbek region, to carry out tests.

Huda Samra, communications advisor for UNRWA in Lebanon, told The Associated Press (AP) that though no screening was taking place among Palestinian refugees in Lebanon, virus testing was being carried out on refugees showing symptoms of COVID-19. She said the agency was committed to paying all testing and hospital expenses.

"The agency is doing everything necessary to provide the required assistance to the patient’s family to allow them to isolate themselves with all the arrangements required and to secure the necessary needs,” the UNRWA statement said Wednesday.

Lebanese Health Minister Hamad Hassan told reporters that two teams from the ministry headed on Wednesday morning to the Bekaa Valley, one to the Baalbek General Hospital and another to Wavel camp where they will take test samples.

Refugee cases will be treated exactly like their Lebanese counterparts, the minister said, comments that were apparently in response to rights groups' questions about Lebanon's ability to provide refugees with health care.

The Baalbek region is one of the least infected districts in Lebanon, with less than five cases, according to government statistics.

Also Wednesday, Iran reported 94 more deaths from the virus, with the death toll in the country now reaching 5,391, out of 85,996 confirmed cases. Iran is the hardest hit country in the Middle East and one of the world's worst outbreaks of the coronavirus.