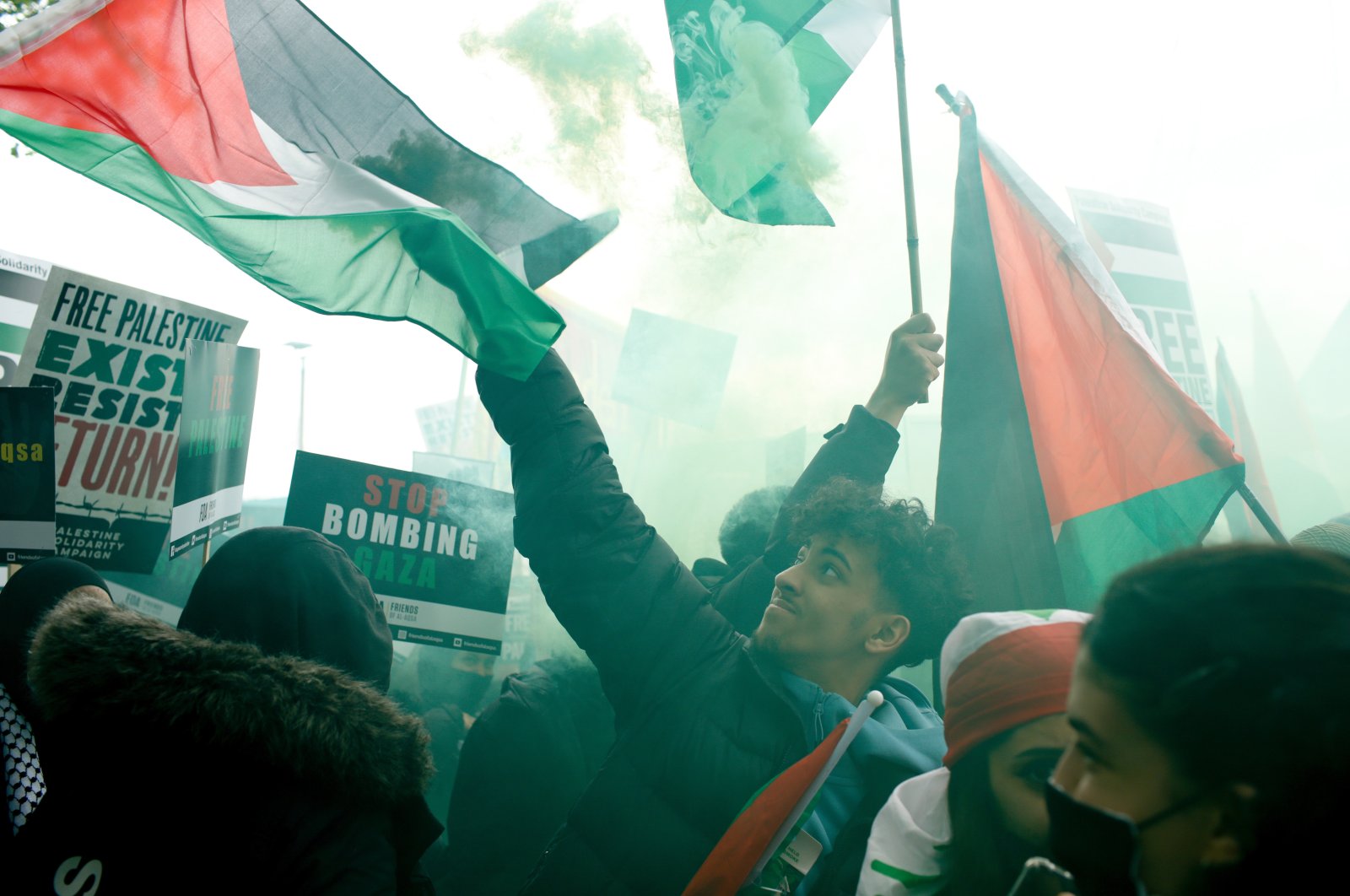 Those who speak openly about the suffering Palestinians' face every day under Tel Aviv's aggressive policies and state violence are being targeted by the media, while thousands around the world have joined the chorus of voices calling for the liberation of Palestine following an 11-day Israeli bombardment of Gaza that killed at least 279 people

Pro-Palestinian supporters around the world have come under immense pressure from global media organizations for their stance against Israeli bloodshed in the Gaza Strip and other occupied territories, while thousands of demonstrators across the world continue to show solidarity with the people of Palestine after Tel Aviv and Hamas reached a cease-fire agreement Thursday.

Pop music superstar Dua Lipa took to Twitter on Saturday to slam a full-page advertisement in the New York Times that accused her of being anti-Semitic. The ad from the World Values Network refers to Lipa and models Bella and Gigi Hadid as "mega-influencers" who have "vilified the Jewish state" and "accused Israel of ethnic cleansing."

The advertisement mirrors what the World Values Network said on its website, accusing Lipa and the Hadids of forming an "unholy trinity of anti-Semitic bile to demonize the Jewish people, whom they insist have no right to defend themselves."

Included is a photo of all three women modeling red-carpet looks with the headline, "Meet the new Hamas influencer brigades." Lipa, who is dating Anwar Hadid, the younger brother of the Hadids, fired back on Twitter: "The World Values Network are shamelessly using my name to advance their ugly campaign with falsehoods ... I stand in solidarity with all oppressed people and reject all forms of racism."

The Hadid sisters have been outspoken in their support of Palestine, their father's homeland, and in their criticism of Israel during the Israeli offensive in Gaza. Lipa, a native of London with Muslim heritage, has been far more muted, sharing on Twitter support for the preservation of the Sheikh Jarrah Palestinian neighborhood in East Jerusalem. Other celebrities have taken to Twitter to show support for Palestine, including singers Roger Waters, Zayn, The Weeknd and Avengers star Mark Ruffalo.

Meanwhile, The Associated Press (AP) was heavily criticized for firing a young journalist over her social media activity, with many saying the news agency bowed to a political pressure campaign over her pro-Palestinian views from when she was in college.

Emily Wilder, 22, had started at the AP on May 3 as a news associate for the western U.S., based in Phoenix. On Wednesday, just over two weeks later, the AP informed her that she was being terminated for violations of its social media policy that took place after she became an employee. In the days before her firing, Wilder had been targeted in conservative media for her pro-Palestinian rights activism while a student at Stanford University, where she graduated in 2020.

AP spokesperson Lauren Easton would not say what Wilder had written that violated the policy. Wilder said she wasn’t given specifics. Her Twitter feed since joining the AP contains a few retweets that appear sympathetic to Palestinians in the current Gaza conflict, including a video clip of demonstrators chanting, "Free, free Palestine!”

On Sunday, she tweeted: "‘Objectivity’ feels fickle when the basic terms we use to report news implicitly take a claim. using ‘Israel but never ‘Palestine,’ or ‘war’ but not ‘siege and occupation’ are political choices – yet media make those exact choices all the time without being flagged as biased.”

The AP stressed that the firing was based on what Wilder had done while employed at the news organization.

Thousands of demonstrators across the world continued to show solidarity with the people of Palestine after Israel and Hamas reached a cease-fire agreement Friday, following an 11-day conflict that killed more than 200 people.

Several thousand people marched Saturday in Paris and other French cities in support of Palestinians. This weekend's Paris demonstration was restricted to a rally at the Place de la Republique. Last weekend, thousands of activists defied a ban on a similar demonstration to march in the capital. The General Confederation of Labour trade union said up to 4,000 people attended the Paris rally.

The capital marchers shouted slogans such as "Palestine will live, Palestine will win," "Israel assassin, Macron accomplice" and "We are all Palestinians."

Bertrand Heilbronn, president of the France Palestine Solidarity Association, which organized the Paris rally and other demonstrations, told Agence France-Presse (AFP) that the cease-fire had not resolved anything.

"This fight concerns all those who are attached to the values of justice, dignity and law," he added.

"Even if the bombings have ended, the occupier is still there," said Wael, a 28-year-old at the Paris rally, a Palestinian flag draped around his shoulders. "The residents of Sheikh Jarrah are still facing the threat of expulsion and the Gaza Strip is blockaded," he added.

Other protests took place in cities around France. Regional officials said 1,100 people marched in the southeast city of Lyon, as many as on the previous weekend. In the northern city of Lille, organizers said around 1,000 attended a rally while police put the number at 650. Other protests were held in the eastern French city of Strasbourg, as well as Toulouse and Montpellier in the south.

"Palestinians have a right to live in peace and have a state," said Imad Deaibis in Strasbourg. "Israel has deprived us of our rights and of our houses. I am Palestinian but I no longer have the right to go there, my family has lost everything."

The demonstrations in Sweden did not pass off entirely smoothly. At least 15 demonstrators were arrested in Stockholm during a protest organized in support of Palestine. Demonstrators gathered in Medborgaplatsen Square to protest Israel's attacks on Palestinians in a rally organized by Palestinian associations. Protesters chanted: "Boycott Israel," "Free Palestine" and "Israel is killing our children."

"A cease-fire has been reached between Israel and Palestine, but our struggle for the freedom of Palestine will continue. As a Jew, I am showing my support to the people of Palestine,” Feiler told Anadolu Agency (AA).

Police asked protesters to disperse as part of coronavirus restrictions. When they refused to leave, police intervened and detained 15 people. Police, trying to prevent journalists from recording the protest, detained freelance journalist Orhan Karan and seized his camera. He was later released and his camera was returned.

In Vienna, protesters at two different locations gathered for pro-Palestinian demonstrations, despite a ban. A group gathered in front of the Austrian State Opera and unfurled banners that read "Boycott Israel" and "End to Apartheid," while another group was in front of Votive Church, one of the historical symbols of the city.

A demonstration was held in Bologna, Italy, to support the Israel-Hamas cease-fire and to protest Israel's attacks on the Al-Aqsa Mosque. Thousands gathered at Dell'Unita Square and reacted to Israel's attacks and expressed satisfaction regarding the cease-fire. Protesters carried Palestinian flags chanting slogans, including "Free Palestine" and "We are all Palestinians."

In London, the Ambassador of Israel to the United Kingdom Tzipi Hotovely was met with protests by the International Jewish Anti-Zionist Network and pro-Palestinian demonstrators over Israeli attacks on Palestinian land. Demonstrators outside the Israeli Embassy chanted "Israel is a terrorist state" and "Palestine will be free" as they carried Palestine flags.

Tensions that started in East Jerusalem during the Muslim holy month of Ramadan spread to Gaza as a result of Israeli assaults on worshippers in the flashpoint Al-Aqsa Mosque compound and the neighborhood of Sheikh Jarrah. The escalation resulted in airstrikes by Israel on Gaza, which has left at least 279 Palestinians dead, including 69 children and 40 women, and more than 1,900 others wounded, according to Palestinian authorities. A cease-fire between Israel and Palestinian resistance group Hamas started early Friday. Israel occupied East Jerusalem during the 1967 Six-Day War and annexed the entire city in 1980 – a move that has never been recognized by the international community.

The United Nations Security Council (UNSC) has called for “full adherence to the cease-fire” between Tel Aviv and the Palestinians in the Gaza Strip in its first statement since Israeli aggression struck the enclave on May 10, killing hundreds of people and destroying an already bruised health system.

The statement on Saturday, endorsed by all 15 members of the UNSC, said it “mourned the loss of civilian lives resulting from the violence” and “stressed the immediate need for humanitarian assistance to the Palestinian civilian population, particularly in Gaza.”

Saturday's statement also reiterated "the importance of achieving a comprehensive peace based on a vision of a region in which two democracies, Israel and Palestine, live side by side in peace with secure and recognized borders.”

Palestinian Ambassador to Venezuela Fadi Alzaben said Friday that Israel's crimes in the Gaza Strip must be brought to the International Criminal Court (ICC).

"Israel cannot enjoy such impunity. They have to pay for their crimes and must be tried at the ICC,” he said. Alzaben's remarks were made during an event to show solidarity with the people of Palestine in Guarenas, a municipality bordering Venezuela's capital of Caracas.

The founder of an advocacy group called Youths Against the Israeli Settlement in Hebron in the West Bank, Isa Amr, said the use of live bullets by Israeli forces, especially by their snipers, against peaceful Palestinian demonstrators was a war crime.

"Shooting rubber-coated bullets from short range is also an illegal practice against the civilians, whereas they are supposed to not use excessive force against the demonstrators," Amr said. "There is a deliberate intention by the Israeli occupation forces to inflict more casualties among the civilians to push the Palestinian people to accept the existence of the Israeli occupation."

Amr added that the Israeli settlers have participated with their weapons in attacks against the Palestinian people.

"Israel over years has used physical violence against the Palestinian people," said the head of the field research for the Israeli B'Tselem rights group, Kareem Jubran, adding that in the light of an unprecedented wave of violence against the Palestinians, Israeli forces and settlers both attacked the Palestinians in many incidents. He asserted that such sharing of attacks between Israeli forces and settlers constitutes an Israeli systematic policy applied years ago within the Israeli apartheid policies that aim to strengthen the Jews' control in areas between the Jordan River in the east to the Mediterranean in the west.

The B'Tselem lawyer said the Israeli occupation is consolidating "a group of systematic violations of human rights and crimes against the (Palestinian) civilians at the hands of the Israeli forces."