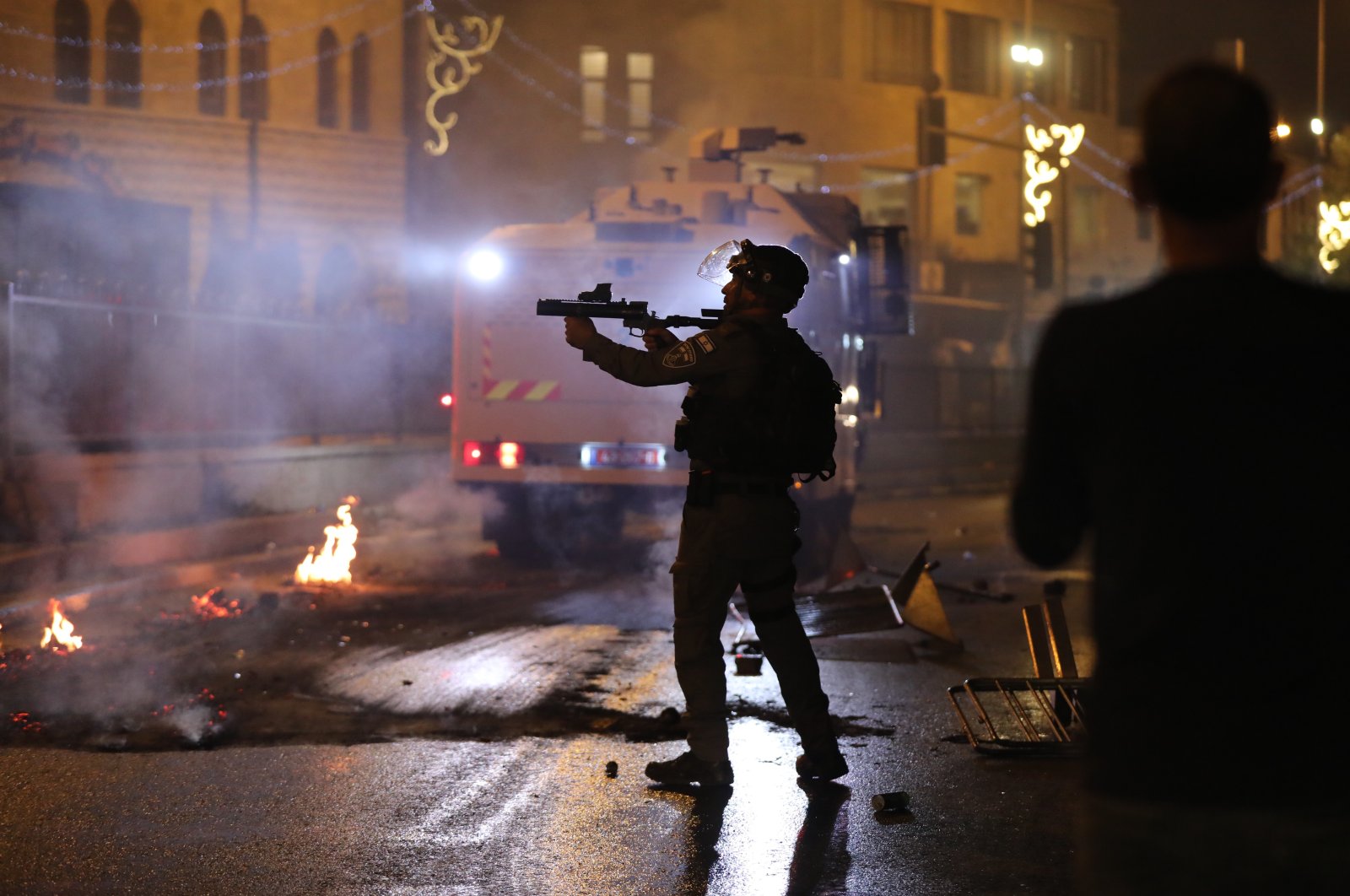 Israeli police fires grenades during a protest at the Damascus gate supporting Palestinian families facing eviction from their homes at the Sheikh Jarrah neighborhood, East Jerusalem, 08 May 2021. (EPA Photo)
by Anadolu Agency May 09, 2021 12:44 pm
RECOMMENDED

The chief of Hamas' diaspora office, Khaled Meshaal, described Israel's eviction of Palestinian families from their homes in the Sheikh Jarrah neighborhood in East Jerusalem as "ethnic cleansing."

"What's happening in Sheikh Jarrah is ethnic cleansing by expelling families that have a history in this neighborhood," Meshaal told an event in Morocco titled "Jerusalem and the Promise of the Hereafter," organized by the Moroccan Association for the Support of Ummah Causes.

The Hamas leader said Jerusalem will never surrender to the "Zionist invaders."

"The Ummah (community) will prevail and its enemies will be defeated despite all the suffering it is going through and attempts to divide it," he added.

"There is no life for us without Jerusalem," Meshaal told the audience. "Jerusalem is not a political, religious, spiritual and civilizational capital, but rather it is the past, present and future, and it is the land that God has promised us to be the land of decisiveness with the Zionists in the first and last round."

Palestinians in Jerusalem have in recent days protested in solidarity with the residents of Jerusalem's Sheikh Jarrah neighborhood amid Israeli police attacks.

The protests came amid Israeli plans to evict Palestinians in the neighborhood from their homes and hand them over to Jewish settler associations.

More than 90 people, mainly Palestinian worshipers and protesters, were injured in fresh Israeli attacks targeting the Old City in occupied East Jerusalem during the holiest night of Ramadan.

A large number of Palestinians gathered at the Damascus Gate after performing the Tarawih prayer in Al-Aqsa Mosque coinciding with Laylat al-Qadr and 53 people were injured following the fresh Israeli attacks, according to Palestinian authorities.

In the past few days, Palestinians in Jerusalem have protested in solidarity with the residents of the Sheikh Jarrah neighborhood amid Israeli police violence. At least 205 people were injured in Israeli attacks at Al-Aqsa Mosque, the Damascus Gate of the Old City and in the Sheikh Jarrah neighborhood Friday, according to the Palestinian Red Crescent. Israeli police also reported 17 injuries. Police defended their actions as "security moves," however, Muslims say they are provocations by Israel threatening their freedom to worship.

Israel occupied East Jerusalem, where the historic Al-Aqsa Mosque complex is located, during the 1967 Arab-Israeli war. It annexed the entire city in 1980, in a move never recognized by the international community.