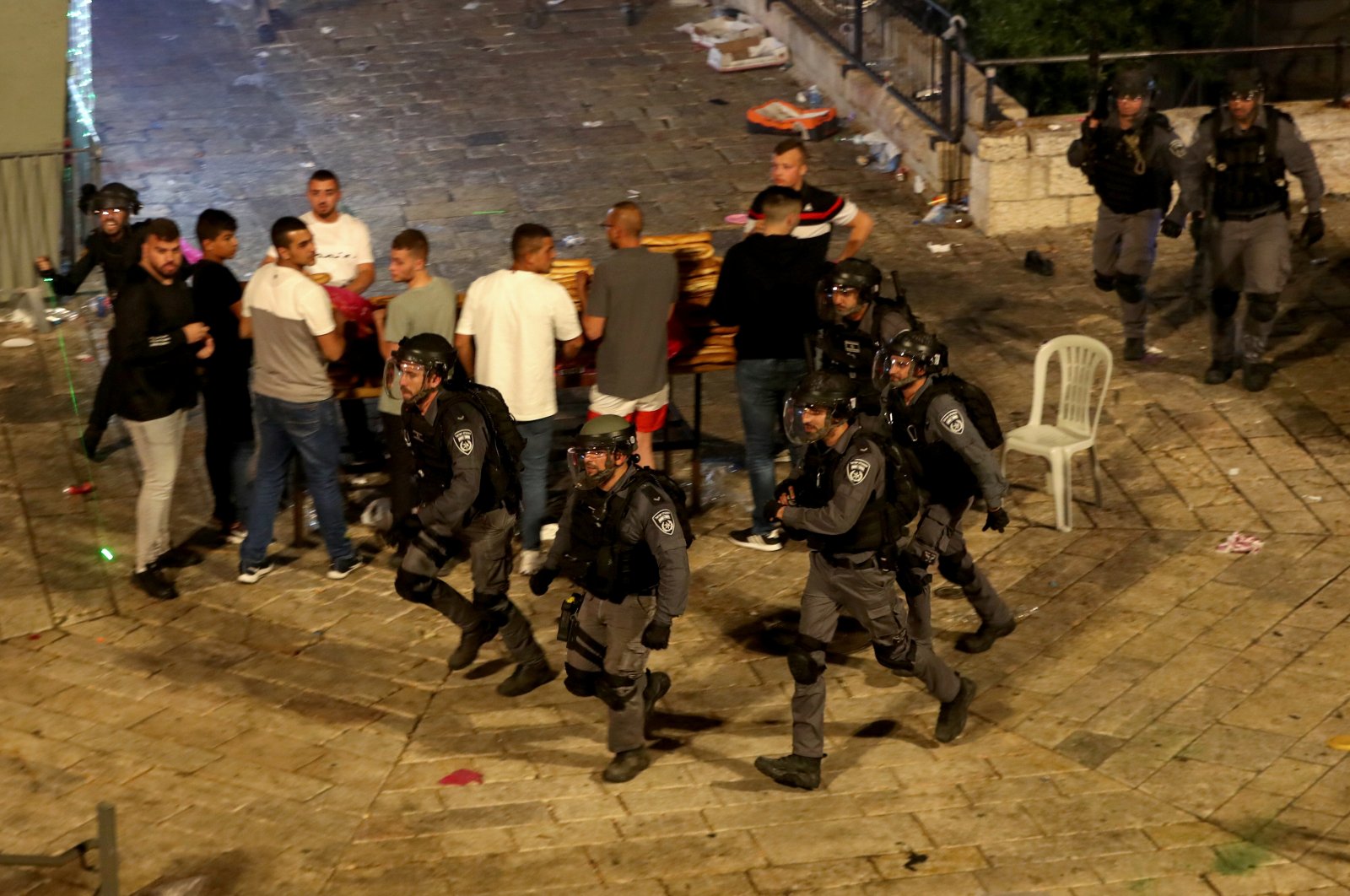 Israeli police are seen during attacks targeting Palestinians at Damascus Gate on Laylat al-Qadr during the holy month of Ramadan, in Jerusalem's Old City, May 8, 2021. (Reuters Photo)
by Agencies
May 09, 2021 12:17 am

The number of injured people rose to 90 in clashes between Israeli security forces and Palestinians in occupied East Jerusalem, the Palestine Red Crescent reported early Sunday.

A 1-year-old and five other children were among those injured, and 16 people were hospitalized because of injuries, the group said in a statement.

A health care professional working with an ambulance crew was also wounded.

Police battered protestors, the group reported in an earlier statement.

Witnesses told Anadolu Agency (AA) that an elderly woman was wounded by a gas canister, and Israeli police took seven Palestinians into custody.

They said police used pressurized water on Palestinians who gathered near the Damascus Gate.

Palestinians in Jerusalem in recent days have protested in solidarity with residents of the Sheikh Jarrah neighborhood amid clashes with Israeli police.

Protests came as the Israeli Central Court in East Jerusalem approved a decision to evict seven Palestinian families from their homes in favor of Israeli settlers at the beginning of 2021.

Women were also targeted by Israeli forces, according to witnesses.

In the past few days, Palestinians in Jerusalem have protested in solidarity with the residents of the Sheikh Jarrah neighborhood amid clashes with Israeli police. At least 295 people were injured in Israeli attacks at Al-Aqsa Mosque, the Damascus Gate of the Old City and Sheikh Jarrah neighborhood on Friday, according to the Palestinian Red Crescent. Israeli police also reported 17 injuries. Police defended their actions as security moves, but Muslims saw them as provocations, accusing Israel of threatening their freedom to worship.

Friday's violence drew condemnations from Israel’s Arab allies and calls for calm from the United States, Europe and the United Nations, and prompted the Arab League to schedule an emergency meeting Monday.

Saturday night was Laylat al-Qadr, or the "Night of Destiny,” the most sacred in the holy month of Ramadan. Muslim authorities estimated 90,000 people were gathered for intense nighttime prayers at Al-Aqsa, the third-holiest site in Islam.

Paramilitary border police marched along the streets of East Jerusalem in full riot gear, with some mounted on horses. In one instance, police clashed with protesters outside the Old City's Damascus Gate after being pelted with water bottles. Police patrols fired stun grenades as they moved through the area, and a police truck periodically fired a water cannon.

One man with a small boy yelled at the police as they marched by. "You should be ashamed!" he said.

Earlier, police reported clashes in the Old City, near Al-Aqsa, and in the nearby East Jerusalem neighborhood of Sheikh Jarrah, where dozens of Palestinians are fighting attempts by Israeli settlers to evict them from their homes. Police reported several arrests, and Palestinian medics said two protesters were hospitalized after being beaten by police. Police said one officer was struck in the face with a rock.

The protests came as the Israeli Central Court in East Jerusalem approved a decision to evict seven Palestinian families from their homes in favor of Israeli settlers at the beginning of 2021.

Earlier Saturday, police stopped a convoy of buses that were filled with Arab citizens on the main highway heading to Jerusalem for Ramadan prayers. Israel’s public broadcaster Kan said police stopped the buses for a security check.

Muslims fast from dawn to dusk during Ramadan, and travelers, upset that they were stopped without explanation on a hot day, exited the buses and blocked the highway in protest. Kan showed footage of the protesters praying, chanting slogans and marching along the highway toward Jerusalem. The road was reopened several hours later.

Ibtasam Maraana, an Arab member of parliament, accused police of a "terrible attack” on freedom of religion. "Police: Remember that they are citizens, not enemies,” she wrote on Twitter.

Protests broke out at the beginning of Ramadan three weeks ago when Israel restricted gatherings at a popular meeting spot outside Jerusalem’s Old City. Israel removed the restrictions, briefly calming the situation, but protests have reignited in recent days over the threatened evictions in East Jerusalem, which is claimed by both sides in their decades-old conflict.

Other recent developments, including the cancellation of Palestinian elections, deadly violence in which a Palestinian teenager, two Palestinian gunmen and a young Israeli man were killed in separate incidents in the West Bank, and the election to Israel’s parliament of a far-right Jewish nationalist party, also have contributed to the tense atmosphere. One right-wing lawmaker, Itamar Ben-Gvir, briefly set up an outdoor "office” in the heart of a Palestinian neighborhood last week, infuriating local residents.

On Sunday evening, Jewish Israelis begin marking "Jerusalem Day,” a national holiday in which Israel celebrates its illegal annexation of East Jerusalem and religious nationalists hold parades and other celebrations in the city. On Monday, an Israeli court is expected to issue a verdict on the planned evictions in Sheikh Jarrah.

The attacks prompted reactions condemning violence and the Israeli stance from all over the world.

Speaking at an event in Turkish capital Ankara, President Recep Tayyip Erdoğan called on all Muslim countries and the international community to take "effective" steps against Israel, adding that those who remain silent were "a party to the cruelty there."

He added that Turkey had "immediately launched the necessary initiatives to get the United Nations, Organisation for Islamic Cooperation (OIC) and all relevant institutions to take action." Most Turkish opposition parties echoed the condemnations.

There was no immediate response to a request for comment from Israel's foreign ministry. Prime Minister Benjamin Netanyahu said in a statement that law and order would be maintained in Jerusalem as would the right to worship.

Hundreds of people crowded outside Israel's Embassy in Ankara and its consulate in Istanbul late on Friday, despite a nationwide COVID-19 lockdown, in protest of the violence in Jerusalem and Al-Aqsa.

Turkey has condemned what it said was Israel's "systematic attempt at evicting Palestinians," referring to the long-running legal case. Erdoğan on Saturday called for evictions to be halted.

Turkey and Israel have had a bitter falling out in recent years despite strong commercial ties, mutually expelling ambassadors in 2018. Ankara has repeatedly condemned Israel's occupation of the West Bank and its treatment of Palestinians.

Foreign Minister Mevlüt Çavuşoğlu, who held talks in Ankara with Palestinian Foreign Minister Riyad al-Maliki, has said any rapprochement between the two sides was unlikely as long as Israeli policies toward Palestinians continued.

The United States said it was "deeply concerned” about both the violence and the threatened evictions. The so-called Quartet of Mideast peacemakers, which includes the U.S., European Union, Russia and United Nations, also expressed concern.

Egypt and Jordan, which made peace with Israel decades ago, condemned Israel's actions, as did the Gulf countries of Bahrain and the United Arab Emirates, two of the four Arab countries that signed U.S.-brokered normalization agreements with Israel last year. The UAE expressed "strong condemnation” of Israel's storming of Al-Aqsa.

Israel's Foreign Ministry had earlier accused the Palestinians of seizing on the threatened evictions, which it described as a "real-estate dispute between private parties,” in order to incite violence.

Hamas, which rules the Gaza Strip and opposes Israel's existence, has called for a new intifada, or uprising. In an interview with a Hamas-run TV station, the group's top leader Ismail Haniyeh warned Netanyahu not to "play with fire” in Jerusalem.

"Neither you, nor your army and police, can win this battle,” he said.