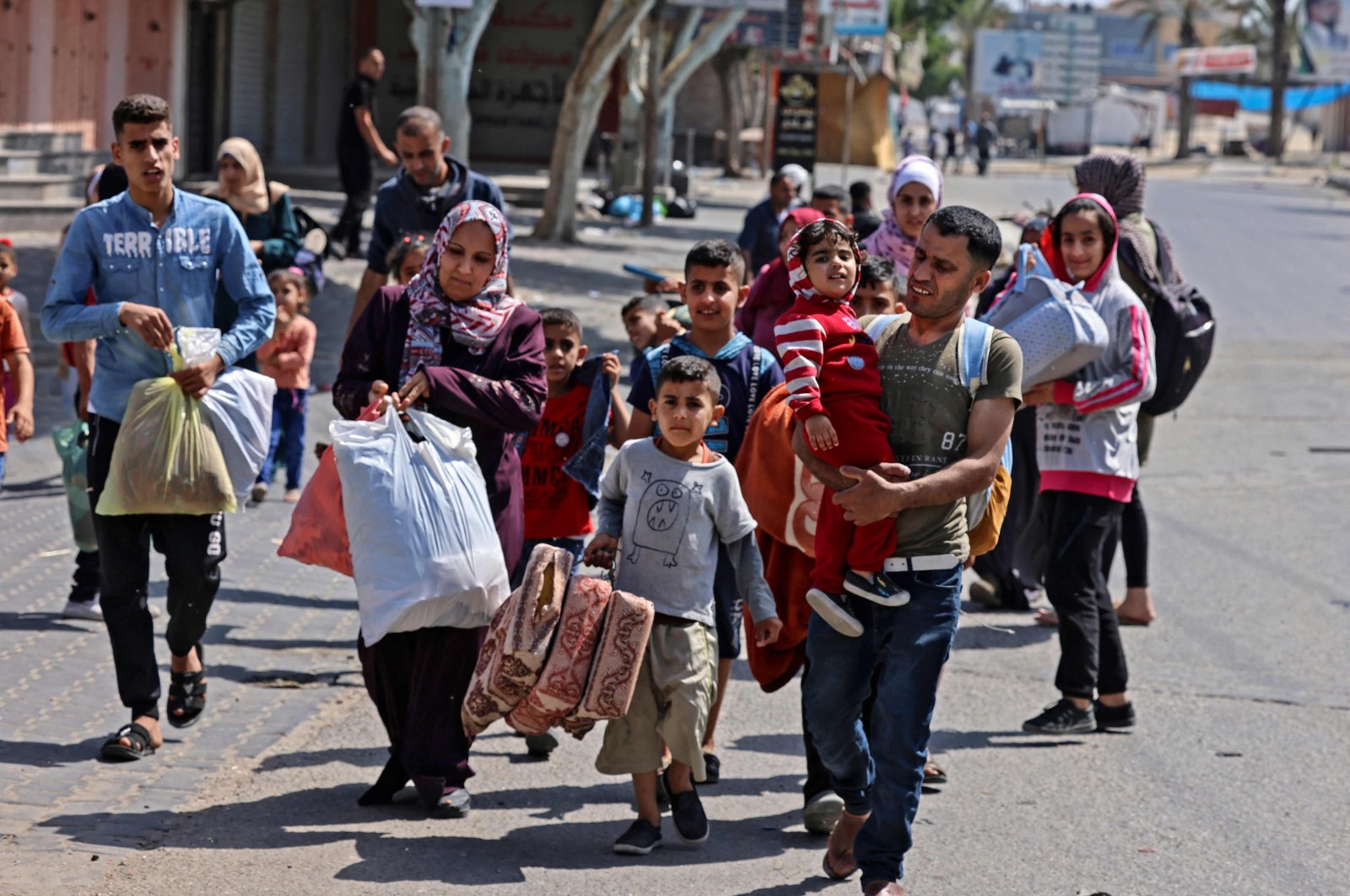 Palestinians carry some of their belongings as they flee Israeli air and artillery strikes in Beit Hanun in the northern Gaza Strip, Palestine, on May 14, 2021. (AFP Photo)
by Agencies May 18, 2021 1:30 pm
RECOMMENDED

At least 52,000 Palestinians have been displaced amid the deadly Israeli airstrikes that have destroyed a number of building in the Gaza Strip, including medical facilities and educational centers, the U.N. aid agency said Tuesday.

The agency said nearly 450 buildings were destroyed or badly damaged during the Israeli offensive. About 47,000 of the displaced people have sought shelter in 58 U.N.-run schools in Gaza, Jens Laerke, spokesperson of the United Nations Office for the Coordination of Humanitarian Affairs (OCHA), told reporters.

Laerke said 132 buildings had been destroyed and 316 had been severely damaged, including six hospitals and nine primary health care centers, as Reuters reported.

"We have an additional influx into our schools. As I mentioned, there are 47,000 as of this morning in UNWRA (United Nations Relief and Works Agency) schools. So it is climbing that number, and there are above 52,000 total IDPs (Internally Displaced Persons),” he added.

The attacks on the Palestinian enclave continued on Tuesday, with the Israeli military firing more than 100 munitions at 65 targets, including the homes of Hamas commanders. At least 212 Palestinians have been killed in heavy airstrikes so far, including 61 children and 36 women, with more than 1,400 people wounded, according to the Gaza Health Ministry.

Explosions from the airstrikes echoed through the predawn darkness in Gaza City, sending flashes of orange across the night sky. According to The Associated Press (AP) the strikes toppled the Kahil building, which contains libraries and educational centers belonging to the Islamic University. Clouds of dust hung over the site, which had been reduced to piles of concrete rubble and tangled powerlines.

Palestinians across Israel and the occupied territories went on strike in a rare collective action against Israel's policies on Tuesday. Leaders of the Palestinian community in Israel, which makes up 20% of the country's population, called the strike, which was embraced by the internationally-backed Palestinian Authority (PA) in the occupied West Bank, where ministries and schools were closed. Most businesses appeared to be observing the strike, and protests were expected.

Muhammad Barakeh, one of the organizers of the strike, said Palestinians are expressing a "collective position” against Israel's "aggression” in Gaza and Jerusalem, as well as the "brutal repression” by police across Israel.

The U.N. spokesman said power supplies across Gaza are still limited to six to eight hours a day on average due to damage to feeder lines and networks.

"This disrupts the provision of health care and other basic services including water, hygiene, and sanitation,” said Laerke, adding that six hospitals and nine primary health care centers had been damaged, with one center sustaining severe damage and one hospital unable to function due to a lack of fuel.

"As far as the security situation allows, the U.N. along with our humanitarian partners provide food and non-food items to displaced families in Gaza, and immediate cash assistance to more than 52,000 people,” said Laerke. The main solid waste disposal site in Gaza has been temporarily closed as a result of bombardment on May 15, he said.

Solid waste is now accumulating in a sub-station in the center of Gaza City. The OCHA official said that the North Gaza Seawater Desalination Plant is not operational.

"This undermines access to drinking water for about 250,000 people. In total, an estimated 800,000 people are lacking regular access to safe water in Gaza,” he said.

The Rafah crossing with Egypt is open for passengers in both directions and the Salah Ad-Din gate, also with Egypt, has also reopened.

"In the West Bank, we continue to see widespread demonstrations and clashes in many locations,” said Laerke.

Health partners and community volunteers continue to treat a substantial number of injuries resulting from the use of live ammunition by Israeli forces.

World Health Organization (WHO) spokeswoman Margaret Harris said that in the Gaza Strip 46% of the central drugs and 33% of central medical supplies are at zero stock – "that's less than one month.”

"And as you know, during COVID-19 one of the things that you need to do is avoid mass gatherings and avoid crowding,” said Harris, noting that there had been "serious access challenges.”

"There have been 36 recorded incidents of obstruction to access for medical teams in the West Bank since 12 May, including prevention of humanitarian health access to at least two people who were fatally wounded,” said the WHO spokeswoman.