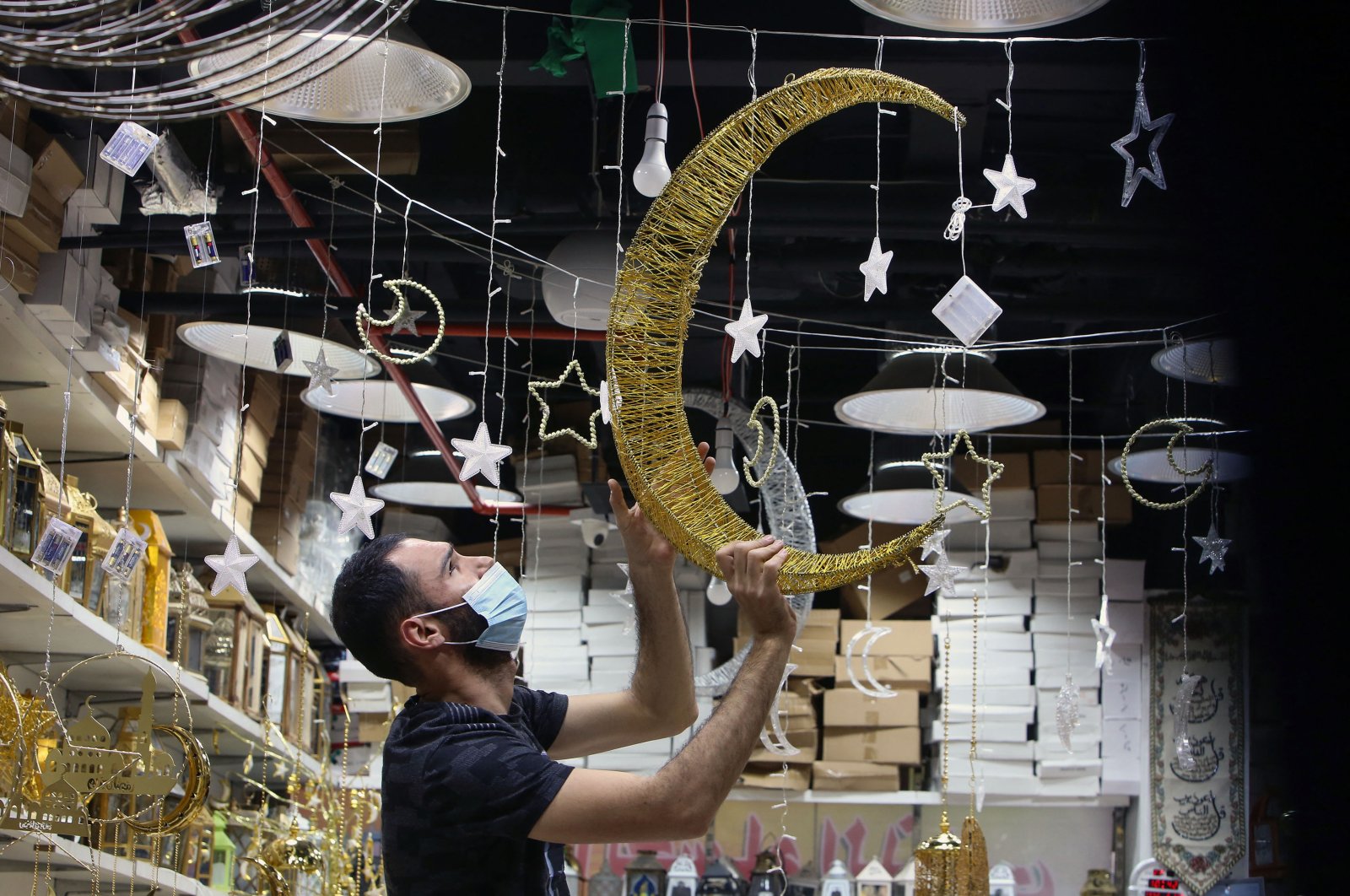 For the second year in a row, Muslims around the world are entering Ramadan amid the COVID-19 pandemic. While hopes for a better celebration of the holy month are high, some states halted visits to mosques and implemented other measures to prevent infection surges.

For Ramadan this year, Magdy Hafez has been longing to reclaim a cherished ritual: performing the nighttime group prayers called taraweeh at the mosque once again. Last year, the coronavirus upended the 68-year-old Egyptian’s routine of going to the mosque to perform those prayers, traditional during Islam’s holiest month.

The pandemic had disrupted Islamic worship the world over, including in Egypt where mosques were closed to worshippers last Ramadan.

"I have been going to the mosque for 40 years so it was definitely a very, very, difficult thing,” he said. "But our religion orders us to protect one another.” Still, "it’s a whole other feeling, and the spirituality in Ramadan is like nothing else.”

Egypt has since allowed most mosques to reopen for Friday communal prayers and for this Ramadan it will let them hold taraweeh, also with precautions, including shortening its duration. Ramadan, which begins this week, comes as much of the world has been hit by an intense new coronavirus wave.

For many Muslims navigating restrictions, that means hopes of a better Ramadan than last year have been dashed with the surge in infection rates, though regulations vary in different countries.

A time for fasting, worship and charity, Ramadan is also when people typically congregate for prayers, gather around festive meals to break their daylong fast, throng cafes and exchange visits. Once again, some countries are imposing new restrictions. But the concern is high that the month’s communal rituals could stoke a further surge.

"The lack of adherence that happened last Ramadan, hasty lifting of the curfew imposed at the time and reopening of places of congregations ... led to grave consequences that lasted for months,” said Ahmed al-Mandhari, the World Health Organization’s (WHO) regional director for the Eastern Mediterranean. "We have a lot of worries of a repeat of what had happened last Ramadan, especially since Ramadan coincides with another important holiday, which is Easter,” he said by email.

Orthodox Christians mark Easter on May 2.

In Pakistan, new case numbers grew from fewer than 800 a day at the start of the month last year to more than 6,000 a day a few weeks after Ramadan ended.

Officials largely attributed the increase to Pakistanis flouting restrictions. After a dip, the country is back up to more than 5,000 new cases a day. Iran on Saturday began a 10-day lockdown amid a severe surge in infections that followed a two-week public holiday for Nowruz, the Persian New Year.

Economic hardship also looms over the month for many. In war-torn Syria, Abed al-Yassin was concerned about what his iftar – the meal at sunset breaking the fast – will look like this year.

"It will be difficult to even have fattoush,” al-Yassin said, referring to a salad that is a staple of the holy month in his country. He’s spending his second Ramadan in a tent settlement near the Turkish border after he was driven from his hometown last year during a Russian-backed government offensive that displaced hundreds of thousands.

"Our main wish is to return to our homes,” said al-Yassin, who lives with his wife, three sons and daughter in a tent. He relies mostly on food aid, he said. Camp residents have recently received bags of lentils, pasta and bulgur and receive bread on daily basis.

Lebanon is being squeezed by the worst economic and financial crisis in its modern history, exacerbated by the pandemic and a massive deadly explosion in Beirut in August.

"We are going through a period when some people are fasting whether during Ramadan or not,” said Natalie Najm, an insurance broker. Even with her job, she can barely cover food costs, she said. "What about others who lost their jobs?”

To prevent large gatherings in Ramadan, Saudi Arabia has forbidden mosques from serving iftar and sahur, a meal just before the fast’s start at sunrise.

Many Muslim religious leaders, including in Saudi Arabia, have tried to dispel concerns about getting the coronavirus vaccine in Ramadan, saying that doing so does not constitute breaking the fast.

With new infections exceeding earlier peaks in India, Muslim scholars there have appealed to their communities to strictly follow restrictions and refrain from large gatherings, while asking volunteers and elders to look after the needy. Last year’s Ramadan in India was marred by rising Islamophobia following accusations that an initial surge in infections was tied to a three-day meeting of an Islamic missionary group, the Tablighi Jamaat, in New Delhi.

Turkey is likely to order a tightening of restrictions this week ahead of the vital tourism season, a senior government official said. Turkey ranks fourth globally in new case numbers, which peaked near 56,000 last week – a five-fold jump from early March when Erdogan loosened social curbs in a period of "controlled normalization."

The official said steps may include limiting intercity travel, which doctors say is key to transmission, restricting the movement of those under 20 and over 65 years, and closing sports and leisure facilities.

Separate sources on the 38-member science board said some wanted a complete lockdown throughout Ramadan or failing that, restrictions on movement between cities and reductions in public transport use within cities by adjusting work shifts.

"The plan is to lower case numbers before the tourism season fully begins because daily case numbers above 50,000 will impact tourism in a seriously negative way," the official said.

In Pakistan, authorities are allowing mosques to remain open during Ramadan with rules in place that include barring worshippers over 50 years old and requiring masks. But given how rules were widely ignored last year there, doctors have been asking the government to close mosques. "We are very concerned about the gatherings,” Dr. Qaiser Sajjad, secretary-general of the Pakistan Medical Association, said Sunday. He urged the government and Pakistan’s clerics to put together a better plan during Ramadan to stop the spread of the virus.

"We must learn from the previous year,” he said. Sajjad is calling for a complete lockdown of the eastern city of Lahore.

Afghanistan is leaving it up to worshippers to watch out for each other, keep their distance and stay away from the mosques if they are feeling ill. "Saving a human life is an obligation ... you can’t put the life of a human in danger or at risk at all,” said Sayed Mohammad Sherzadi, head of Hajj and religious affairs department for Kabul province.

Malaysia has some movement restrictions in place and has declared a coronavirus emergency that suspended Parliament until August following spikes in infections. But it has lifted last year’s ban on taraweeh prayers and Ramadan bazaars – which sell food, drink and clothes – though strict measures will be in place.

Back in Egypt, Nouh Elesawy, undersecretary for mosque affairs at the country’s Ministry of Endowments, had a message to the faithful ahead of the start of the month: "If you want the houses of God to remain open, adhere to the precautionary procedures and regulations.” Ramadan also typically has a distinct cultural and social flavor for many.

In Egypt, giant billboards bearing the faces of celebrities advertise Ramadan television series, a favorite pastime for many. In bustling markets around Cairo’s Al-Sayeda Zainab Mosque, shoppers browsed stalls stacked with decorative Ramadan lanterns in vibrant colors, inspected the offerings and bargained for a deal. In another Cairo neighborhood, people posed with a giant Ramadan lantern towering over one street and snapped photos.

One Ramadan tradition in Egypt that remains a casualty of the virus for the second year is the "Tables of the Compassionate,” communal charity iftars where strangers would break bread together at free meals served on long tables on the street.

The tables may be gone, but not the month’s spirit of giving. Neveen Hussein, 48, said colleagues brought her "Ramadan bags” filled with rice, oil, sugar and other staples to distribute to needy families. It’s an annual tradition, she said, rendered more urgent by a pandemic that has hurt the livelihoods of many of those already struggling.