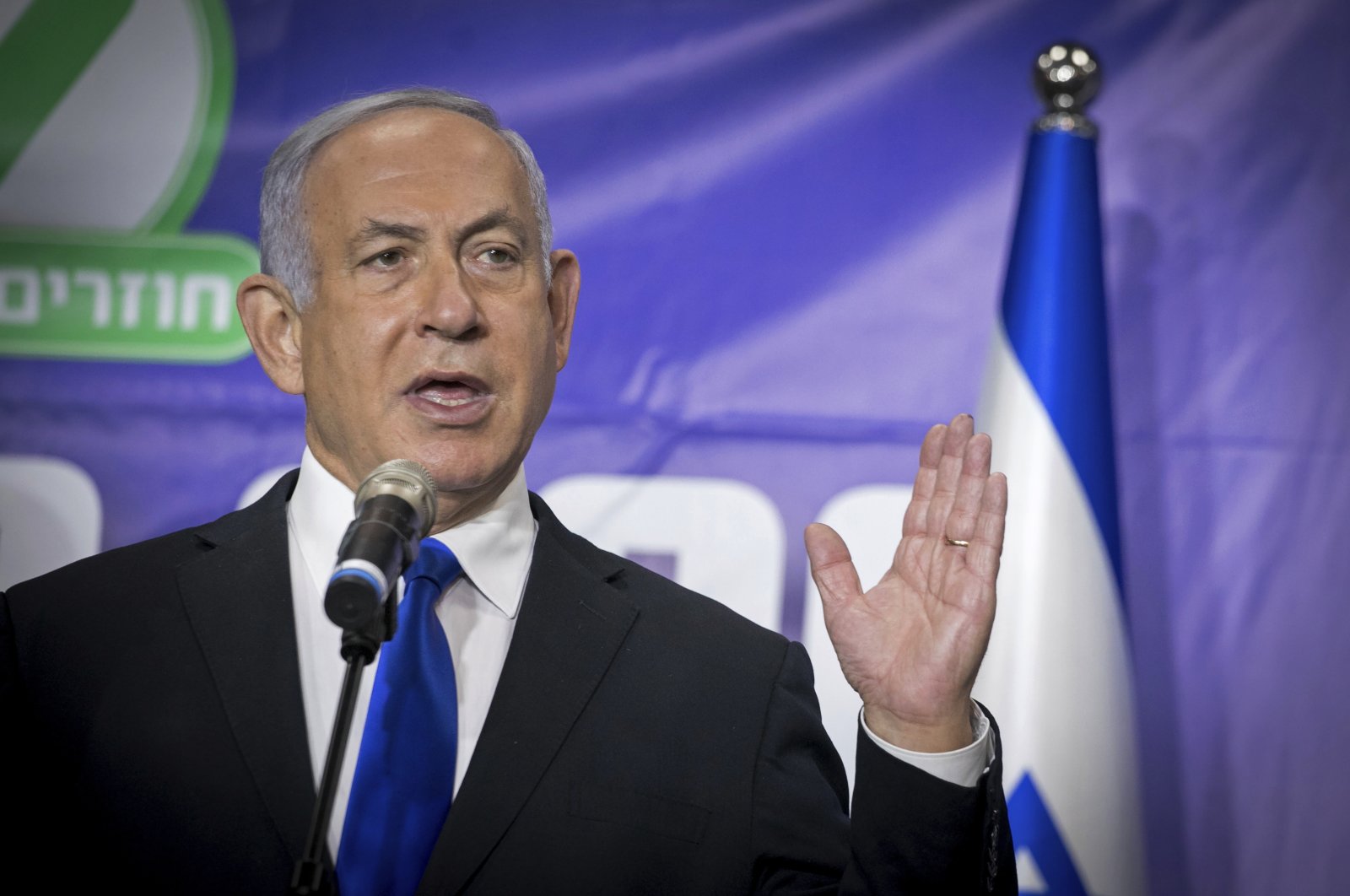 Israeli Prime Minister Benjamin Netanyahu speaks to journalists after meeting the Israeli citizen who was the 5 millionth person to be vaccinated in Israel, at a ceremony in Tel Aviv, Israel, March 8, 2021. (AP Photo)
by Daily Sabah with AP Mar 21, 2021 3:29 pm
RECOMMENDED

Israeli Prime Minister Benjamin Netanyahu promised Saturday to launch flights from Tel Aviv to Mecca if he is victorious in the March 23 elections.

“I’m going to bring you direct flights from Tel Aviv to Mecca,” Netanyahu said in an interview with Channel 13 in a statement, sparking widespread controversy. He also highlighted that relations with Saudi Arabia are “normal,” according to the Israeli newspaper Jerusalem Post.

In the last year of the Trump administration, there were rumors that ties between Saudi Arabia and Israel would be realized under the Abraham Accord, in which Israel established normalized relations with four Arab states. Normalized relations with Saudi Arabia never materialized but Riyadh has granted Israel the right to fly over the ground, which it has denied to the Jewish state in the past.

During an interview with Channel 13, Netanyahu hailed the four agreements and promised that four more deals would be closed. This was the promise he made last week. He brushed aside criticism of the failed and ultimately canceled a meeting with Abu Dhabi Crown Prince Mohammed bin Zayed Al Nahyan. Netanyahu was scheduled to fly to the United Arab Emirates (UAE) for the meeting, but it was first canceled due to diplomatic turmoil with Jordan. As a result of the fiasco, Amman prevented an Emirati plane from flying from Amman to Tel Aviv to pick up Netanyahu for a visit.

The UAE rejected an attempt to postpone the visit, explaining that they do not want to participate in Netanyahu's reelection campaign. It has been speculated that if Netanyahu had traveled to the UAE, he would have met with the Crown Prince of Saudi Arabia, Mohammad bin Salman (MBS).

In the interview, Netanyahu said “our relations with the UAE are very strong," adding that Abu Dhabi vowed to invest 40 billion Israeli new shekels ($12 billion) in Israel. He also bragged about his close ties with both U.S. President Joe Biden and Russian President Vladimir Putin.

Netanyahu faces wide criticism with thousands of protesters demanding his resignation for months. Israelis demonstrating outside his residence in Jerusalem on Saturday once again called for an end to his leadership just three days before the country's fourth election in two years. Protesters filed through streets closed to traffic by police, waving flags, banging drums, blowing horns and shouting chants to replace the 71-year-old conservative. The crowd was larger than many previous anti-Netanyahu protests over the past year, with Israeli media reporting it numbered about 20,000.

Though his right-wing Likud is expected to emerge as the biggest party in the March 23 ballot, opinion polls predict no clear winner with a majority in parliament or able to form a government – similar to the three previous elections. Pressure has mounted in the election run-up on Netanyahu, who is on trial for corruption and accused by critics of mismanaging the coronavirus pandemic.

Netanyahu is hoping the success of his government’s rapid COVID-19 vaccination program, which has allowed much of the economy to open after three lockdowns, along with a series of normalization agreements with Arab countries, will give him the boost needed to secure a majority in parliament. Netanyahu faces charges of bribery, fraud and breach of trust, all of which he denies.