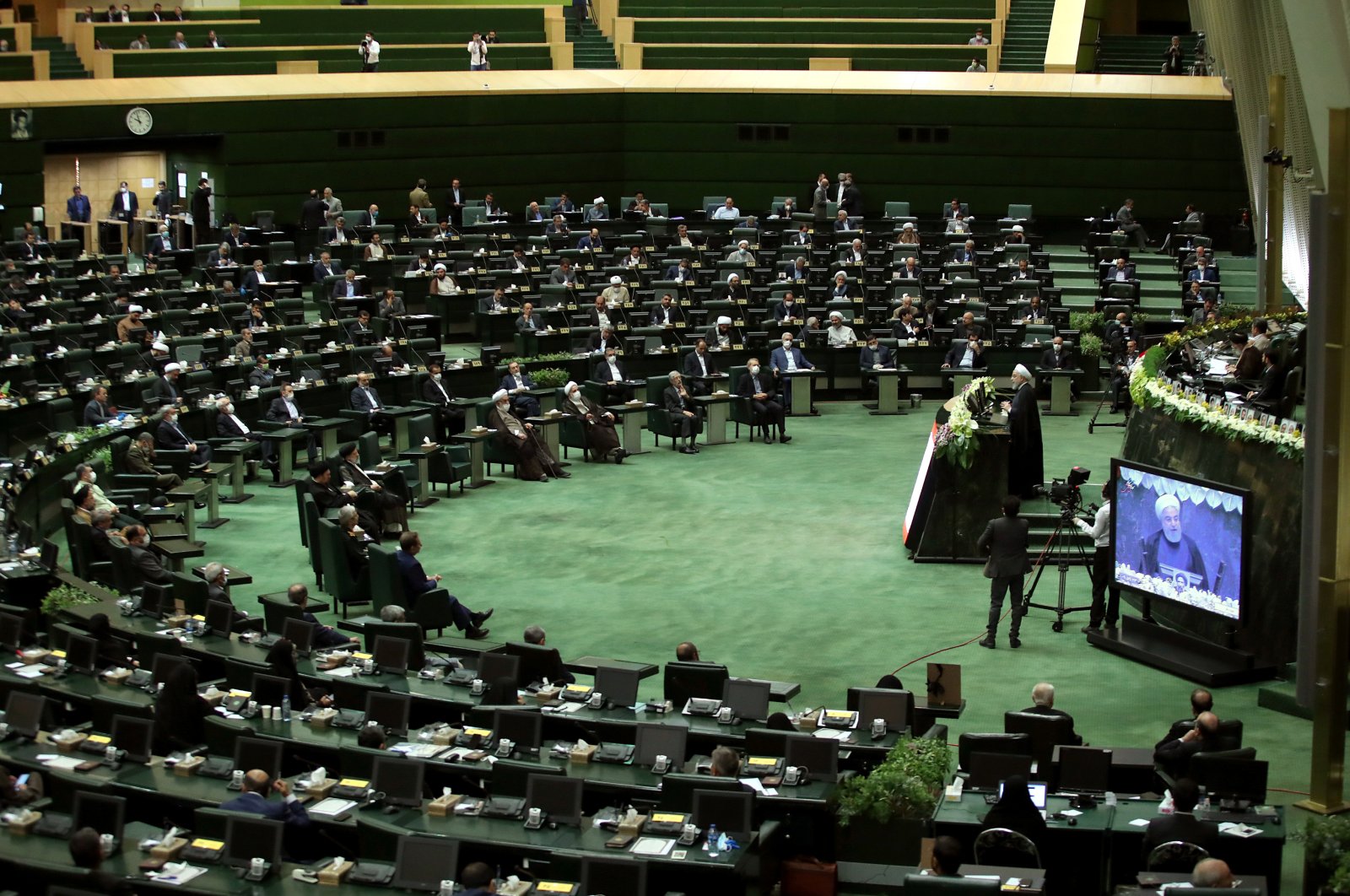 Iranian President Hassan Rouhani speaks during the opening ceremony of Iran's 11th Parliament, as the spread of the coronavirus continues, Tehran, Iran, May 27, 2020. (Reuters Photo)
by Agencies May 27, 2020 11:12 am
RECOMMENDED

Iran's parliament reconvened on Wednesday for the first time since the Feb. 21 elections under strict health protocols and social distancing rules to ward off the coronavirus in one of the hardest-hit Middle Eastern countries.

Many lawmakers wore masks and their temperatures were taken before entering the parliament building in southern Tehran, Iranian media reported.

Like hardliners, conservatives back the ruling theocracy, but unlike them support more engagement with the outside world.

Iran's 290-seat Parliament has no major influence on foreign affairs or Iran's nuclear policy, which are determined by Khamenei. But it might bolster hardliners in the 2021 election for president and toughen Tehran's foreign policy.

Next week, lawmakers will choose a Parliament speaker for a one-year term.

Iran's health ministry said on Tuesday that the death toll in Iran had reached 7,508 with 139,511 confirmed cases. State TV said all 268 lawmakers who attended the opening ceremony had tested negative for the coronavirus.

"We are among the countries that have been successful in their fight against this dangerous virus," President Hassan Rouhani said in a speech to Parliament broadcast live on state TV.

Because of the outbreak, the lawmakers postponed a traditional visit to the shrine of the founder of the Islamic Republic of Iran, Ayatollah Ruhollah Khomeini, Iran's state news agency IRNA reported.

After 69 days, Iran reopened holy Shiite sites and shrines across the country. Pilgrims have to respect social distancing regulations when entering.

Rouhani also urged Iranian lawmakers to "cooperate" with his government in a speech during the inaugural session of the new Parliament following February elections swept by conservatives.

"I hope that in the year that remains for this government we will be able to cooperate and work together," Rouhani said in the address before the newly formed Parliament, or Majles.

Rouhani, who is in the final year of his second and final term, called on members of Parliament, collectively and individually, to place the "national interest above special interests," "party interests" or "constituency interests."

The moderate president defended the performance of his government, which has faced criticism from its conservative and ultra-conservative opponents that now form a majority in Parliament.

For many observers, the record abstention in February's elections reflected the people's disenchantment with broken promises.

Less than 43% of voters cast ballots in the election, according to official results.

The signing of an international agreement on Iran's nuclear program in 2015 had raised hopes for a bright economic future and an opening up of the country to the world after years of isolation.

But these hopes were dashed before being totally buried in 2018 when U.S. President Donald Trump withdrew from the accord and began reimposing sanctions on Iran.

In his speech, Rouhani again denounced what he called the "psychological war" and "economic and medical terrorism" that he said the U.S. was waging against his country.

But he said the Iranian nation had stood up against "the enemy" and that its resistance had won.

The president praised his government's performance in dealing with the coronavirus outbreak as a source of "great pride," adding that Iran was "among the countries that have succeeded."