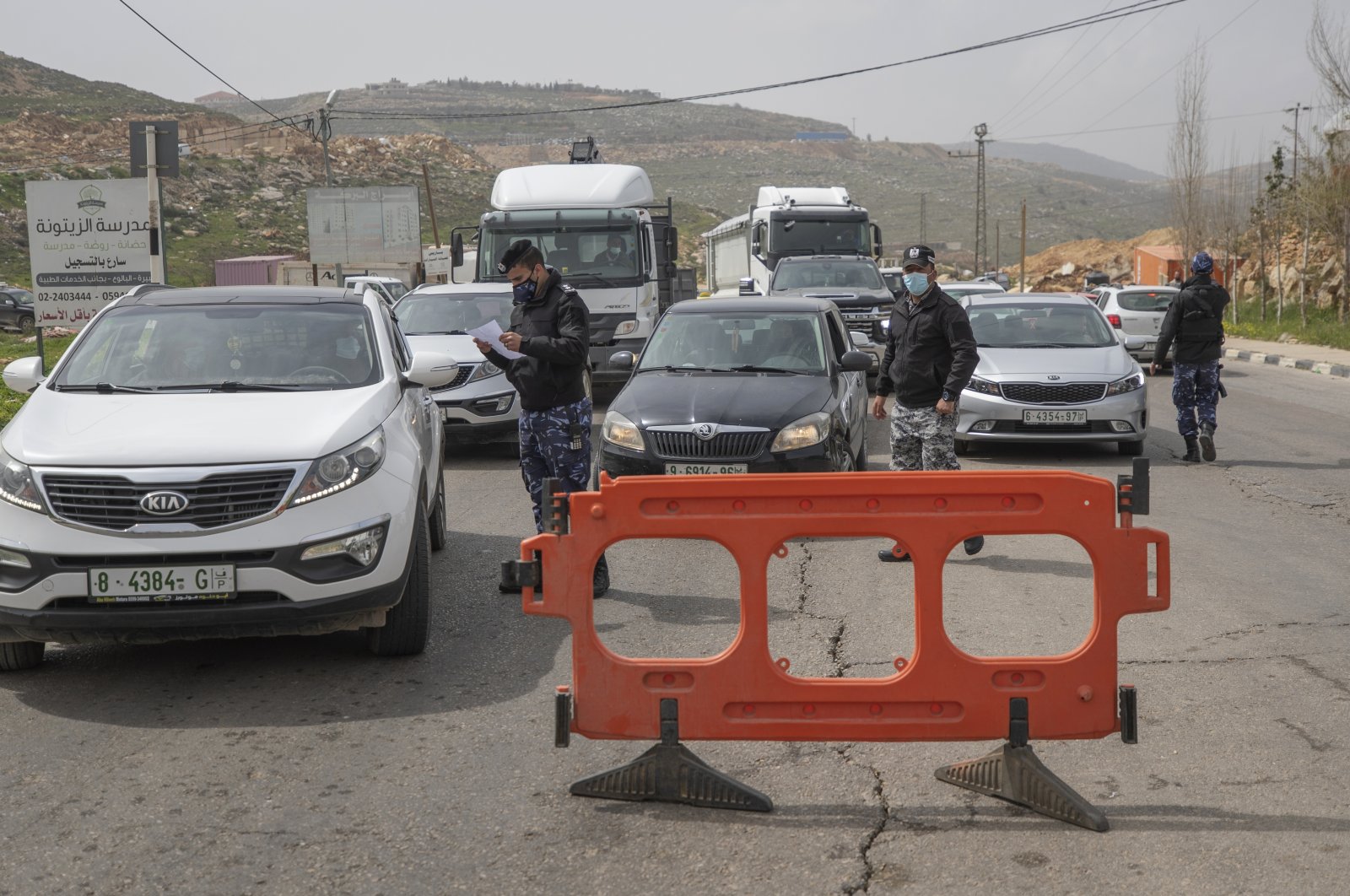 Palestinian security forces stop vehicles as part of a lockdown and quarantine measures at an entrance of the West Bank city of Ramallah, March 11, 2021. (AP Photo)
by Agencies Mar 14, 2021 2:36 pm
RECOMMENDED

The Palestinian government has ordered a five-day lockdown in the occupied West Bank as of Monday amid a surge in coronavirus cases.

In a statement, government spokesperson Ibrahim Melhem said movement between Palestinian cities will be banned except for health care staff.

The spokesperson said schools and colleges will remain closed.

The restrictions do not include the Gaza Strip, which is under the control of the Palestinian resistance group Hamas.

Palestinian health authorities confirmed 27 deaths and 1,784 new infections of COVID-19 on Saturday, taking the tally in both the West Bank and Gaza Strip to 234,449 cases, including 2,494 fatalities.

The Palestinian Health Ministry started a COVID-19 vaccination campaign on Feb. 2, with health workers being first in line. Palestinian health authorities have received only 2,000 of the 5,000 doses pledged by Israel to the Ramallah-based Palestinian Authority (PA).

Israel, which is carrying out an aggressive inoculation campaign for its own citizens, has faced mounting global pressure in recent weeks, including from the United Nations, to help Palestinians in the West Bank and Gaza Strip access vaccines.

Israel's defense ministry said Sunday that it would send 5,000 vaccine doses to the Palestinian Authority to vaccinate medical workers.

The United Nations as well as leading rights groups have argued that the Jewish state must ensure that Palestinians are vaccinated, citing its obligations under international law as an occupying military power. Israel has occupied the West Bank since the 1967 Six-Day War. Its forces withdrew from Gaza in 2005 but have maintained a tight blockade on the strip since 2007, the year Hamas took power.

The PA has previously said that it expects to receive a vaccine supply through the U.N.-backed COVAX program, set up to help less wealthy nations respond to the pandemic.

The PA, based in Ramallah in the West Bank, has also said that it had signed contracts with four vaccine providers, including the makers of Russia's Sputnik V.

Its procurement arrangements should be enough to cover 70% of the Palestinian population in the West Bank and Gaza, the PA has said.