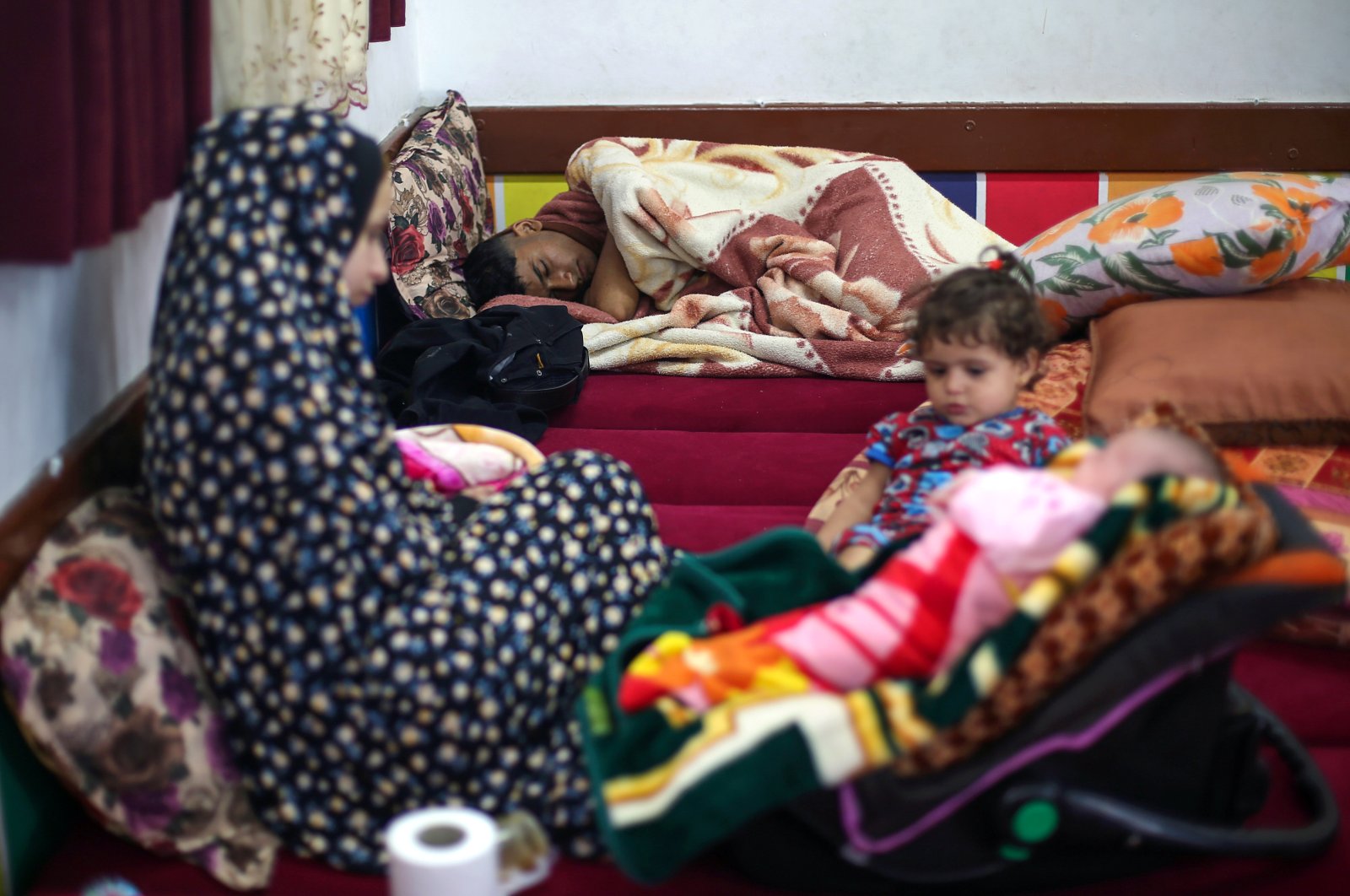 A Palestinian man, who fled his home due to Israeli air and artillery strikes, sleeps in a United Nations-run school where he takes refuge with his family, in Gaza City, May 15, 2021. (Reuters Photo)
by REUTERS May 20, 2021 6:44 pm
RECOMMENDED

Many Palestinian families are fleeing their homes as Israel continues to indiscriminately pound targets in Gaza with airstrikes. The Mashharawi family have already fled their home to a relative's apartment in the Gaza Strip and are prepared for another dash at any time.

For more than a week, since Israel began its attacks on Gaza, they have retreated each evening to the windowless corridor, with vital documents and other items packed and ready to grab.

"Our life is full of fear. There is no safety at all," said Mohammad al-Mashharawi, a father of triplets aged five and a one-year-old infant.

Diplomacy toward a cease-fire between Israel's military and Palestinian groups in Gaza has yet to deliver an end to the unrelenting exchange of fire, running through the day and night.

Israeli airstrikes and artillery fire as well as the retaliatory rocket attacks from Palestine often intensify after the sun sets.

Over the border in Israel, sirens wail hours or even minutes apart in areas in range of the rocket salvoes, sending people dashing to shelters or "safe rooms." Where these are not available, some also use hallways and staircases.

In densely populated Gaza, there are fewer places to run. Many of the 2 million people packed into this narrow strip of land are already refugees, whose families fled towns and cities now in Israel.

Mashharawi and his family left their own home after a heavy bombardment.

"I moved from my house to my uncle's and I keep all my personal belongings ready so if there is a threat to our lives or around us, we can immediately move to another house," said Mashharawi, 31, speaking in his uncle's third-floor flat in a seven-story block in Gaza City.

They sleep on a mattress in the hall, which has no windows, to avoid the risk of flying glass from any blast. Small bags next to the door contain their birth certificates and other key documents, jewelry, phones, laptops and some clothes.

According to the United Nations, at least 75,000 Palestinians have been displaced due to Israeli attacks on Gaza.

Gaza's Housing Ministry says 16,800 housing units have been damaged, with 1,000 of them destroyed and 1,800 uninhabitable.

At least 227 Palestinians have been killed, including 64 children and 38 women, and 1,620 others injured in Israeli attacks on the Gaza Strip since May 10, according to the Palestinian Health Ministry. The U.N. humanitarian agency says six hospitals and nine primary care health centers have been hit.

Israel puts its death toll at 12, including two children, in barrages that it says are among the most intense the country has ever faced. Residential blocks, synagogues and other buildings have been hit by the rockets.

Hamas, the resistance group that runs the Gaza Strip, says such accusations are a pretext for collective punishment. It says it is struggling to secure Palestinian rights against Israeli oppression.

Warnings can give Palestinians a couple of hours or so to leave before a strike. Subsequent blasts have turned several multi-story residential buildings into piles of rubble.

Rana Mashharawi says her one-year-old daughter had been learning words like "mama" and "baba" but has now added the word of an explosion – "boom."

At night, when blasts seemed the most frightening, she said their new bedroom in the hall felt like the safest place. "If something happens, God forbid, we take our belongings and leave," she said.