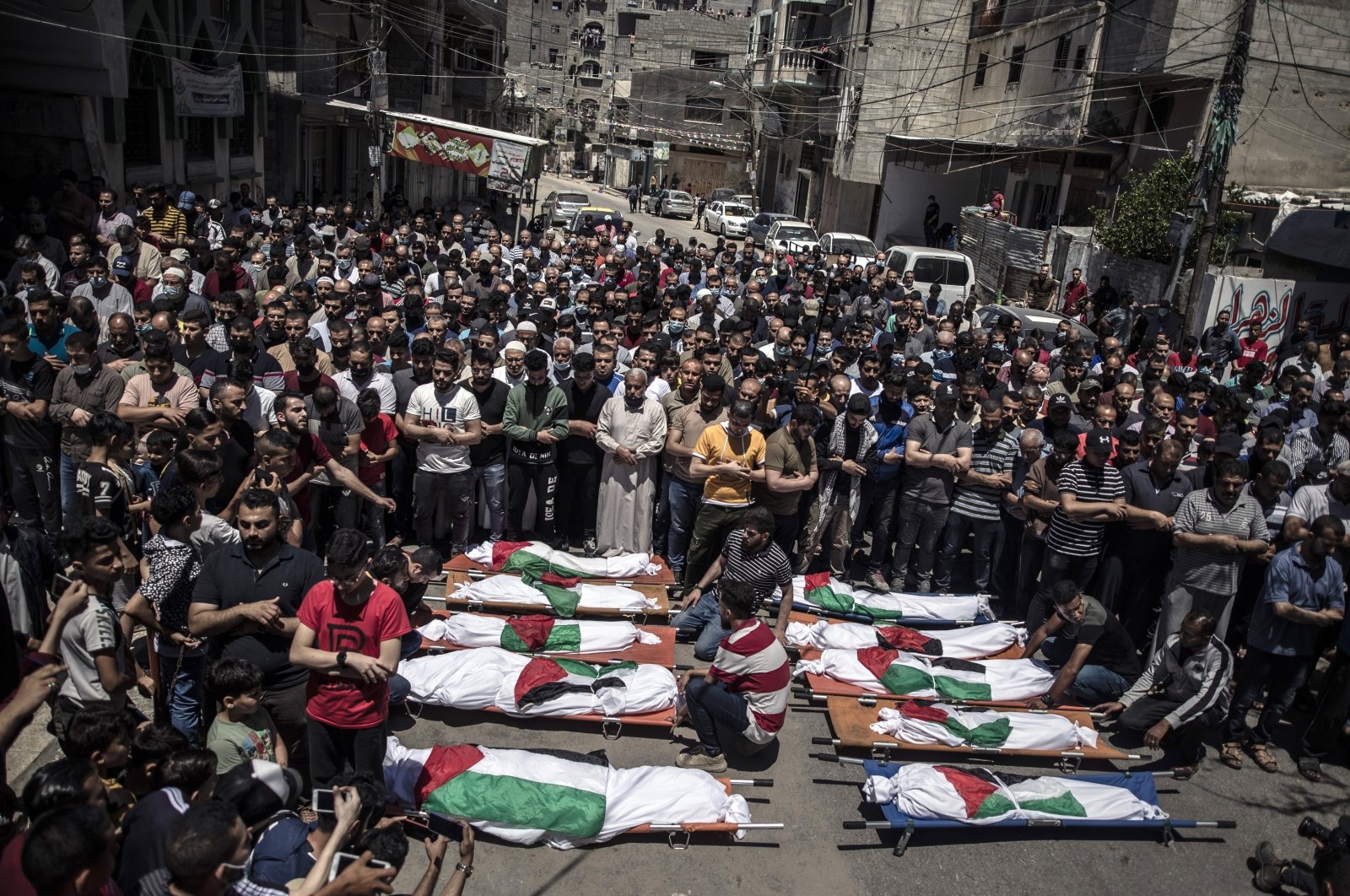 Palestinians attend the funeral of two women and eight children of the Abu Hatab family who were killed after an Israeli airstrike in Gaza City, Gaza Strip, Palestine, May 15, 2021. (AP Photo)
by Agencies May 19, 2021 10:37 am

Israel pummeled residential buildings in Gaza, killing six Palestinians, and fired live bullets at protesters in the occupied West Bank as the global community's diplomatic efforts for a cease-fire have failed to make much headway

Israeli fighter jets continued to shell the Gaza Strip early Wednesday, destroying residential buildings and killing at least six Palestinians as diplomatic efforts for a cease-fire remained stalled despite international calls to end more than a week of fighting.

Residents surveyed the piles of bricks, concrete and other debris that had once been the home of 40 members of the al-Astal family. They said a warning missile struck the building in the southern town of Khan Younis five minutes before the airstrike, allowing everyone to escape. Ahmed al-Astal, a university professor, described a scene of panic before the airstrike hit, with men, women and children racing out of the building in various states of undress.

"We had just gotten down to the street, breathless, when the devastating bombardment came,” he told The Associated Press (AP). "They left nothing but destruction, the children’s cries filling the street ... This is happening and there is no one to help us. We ask God to help us.”

The Israeli military said it struck targets around the towns of Khan Younis and Rafah, with 52 aircraft hitting 40 underground targets over a period of 25 minutes. Gaza’s Health Ministry said a woman was killed and eight people were wounded in those strikes.

Hamas-run Al-Aqsa radio said one of its reporters was killed in an airstrike in Gaza City. Doctors at Shifa Hospital said his was among five bodies brought in early Wednesday. The fatalities included two people killed when warning missiles crashed into their apartment.

Israeli leaders said they were pressing on with an offensive against Hamas, but an Israeli military spokesperson acknowledged that with an estimated 12,000 missiles and mortars in the groups' Gaza arsenal, "They still have enough rockets to fire."

Gaza medical officials say 221 Palestinians have been killed, including 63 children, and more than 1,530 wounded since the fighting began on May 10. The death toll from Israeli raids against Palestinians in the occupied West Bank has risen to four, the Palestinian Health Ministry said Wednesday. The number of people who have been displaced by Israel's ongoing offensive on the Gaza Strip has soared to over 58,000, the U.N. said Tuesday.

Children are being subjected to extensive trauma in Israel’s bombardment of the Gaza Strip. For some, it’s trauma they’ve seen repeatedly throughout their short lives. Videos on social media from Gaza have shown the grief of survivors from families wiped out in an instant.

“They were four! Where are they? Four!” wailed one father outside a hospital after learning all four of his children had been killed. Another showed a young boy screaming “Baba,” as he ran to the front of the funeral procession where men were carrying his father’s body to burial.

Nearly 450 buildings in the Gaza Strip have been destroyed or badly damaged, including six hospitals and nine primary-care health centers, since this round of conflict began, the U.N. humanitarian agency said. Some 48,000 of the 52,000 displaced had gone to 58 U.N.-run schools.

Medical supplies, fuel and water are running low in Gaza, which is home to more than 2 million Palestinians and has been under an Israeli-Egyptian blockade since Hamas seized power from rival Palestinian forces in 2007. Israeli attacks have damaged at least 18 hospitals and clinics and destroyed one health facility, the World Health Organization (WHO) said. Nearly half of all essential drugs have run out. The Gaza Health Ministry said it had salvaged coronavirus vaccines after shrapnel from an Israeli airstrike damaged the territory's only testing facility, which also administered hundreds of vaccines. The medical operation was relocated to another clinic. The WHO said the bombing of key roads, including those leading to the main Shifa Hospital, has hindered ambulances and supply vehicles in Gaza, which was already struggling to cope with a coronavirus outbreak.

The latest strikes came as diplomatic efforts aimed at a cease-fire gathered strength and Gaza's infrastructure, already weakened by a 14-year blockade, rapidly deteriorated. U.S. officials asserted the Biden administration was privately encouraging Israel to wind down its bombardment of Gaza. Egyptian negotiators also were working to halt the fighting, and while they have not made progress with Israel, they were optimistic international pressure would force it to the table, according to an Egyptian diplomat who spoke on condition of anonymity because he was discussing diplomatic efforts. Israel's N12 TV news, quoting unidentified Palestinian sources, reported that Egypt, via "secret channels," had proposed that the Israel-Gaza fighting end on Thursday morning. Ezzat El-Reshiq, a member of Hamas' political bureau who is based in Qatar, issued a statement on Tuesday saying reports that it had agreed to such a cease-fire were untrue.

"There has been no agreement reached over specific timings for a cease-fire," he said. "We confirm that efforts and contacts are serious and are continuing and the demands of our people are known and clear."

Meanwhile, China criticized the United States for its role in the Middle East tensions, adding that its veto has paralyzed the Security Council. In a statement issued on late Tuesday, the Foreign Ministry urged a complete cease-fire by Israel in Palestine.

France also called for a U.N. Security Council resolution on the violence, as diplomats said the U.S. told the council a "public pronouncement right now" would not help calm the crisis.

"Our goal is to get to the end of this conflict. We are going to evaluate day by day what the right approach is. It continues to be that quiet, intensive behind-the-scenes discussions are tactically our approach at this time," White House press secretary Jen Psaki told reporters as the U.N. General Assembly is slated to discuss the violence on Thursday.

Pakistan's Foreign Minister told Anadolu Agency (AA) that his country is banking on the U.N. General Assembly to play its role to evolve a consensus that leads to a cease-fire, de-escalation and an end to atrocities in Palestine.

Turkey's Foreign Minister Mevlüt Cavusoglu met his Pakistani counterpart in Ankara on Tuesday to discuss the situation in Palestine amid continual Israeli bombardment. Qureshi will be attending Thursday's emergency session of the U.N. General Assembly on the issue of the latest Israeli assaults on Palestine.

While global powers held meetings to resolve the conflict that has left casualties from both sides, Israeli Prime Minister Benjamin Netanyahu reiterated in a post on Twitter on Tuesday that Israel's attacks "will continue for as long as it takes to restore calm" for all of its citizens. Netanyahu said Israel's strikes had "set Hamas back many years" – which some Israeli news commentators took as a possible prelude to a cease-fire within days when he could claim victory. But Amos Yadlin, a former Israeli military intelligence chief, said the picture was more complicated, citing civil unrest in Israel, mounting protests by Palestinians in the occupied West Bank and a trickle of rocket fire from Lebanon.

Palestinians in Israel and the occupied territories meanwhile observed a general strike Tuesday in a rare collective action spanning boundaries central to decades of failed peace efforts. Israel captured the West Bank, East Jerusalem and Gaza in the 1967 war. Although the strike was peaceful in many places, with shops in East Jerusalem’s usually bustling Old City markets shuttered, violence erupted in the occupied West Bank. Three protesters were killed and more than 140 wounded in clashes with Israeli troops in Ramallah, Bethlehem, Hebron and other cities, according to the Palestinian Health Ministry. Dozens were treated for wounds caused by live bullets, medics said.

The ongoing bloodshed in the Gaza Strip has unleashed a chorus of voices across Gulf Arab states that are fiercely critical of Israel and emphatically supportive of Palestinians. The vocal opposition to Israel, expressed in street protests, on social media and in newspaper columns, comes just months after pacts were signed to establish ties with Israel – and complicates government efforts to rally Arab citizens around full-throttle acceptance of the deals.

Analysts said the conflict will also set back Israeli efforts to secure more normalization deals with other Arab states, like Saudi Arabia. The criticism has not only put Arab governments that signed the diplomatic accords with Israel in a difficult position with their citizens, it also affirms that the Palestinian cause continues to resonate deeply with people across the Middle East.

Still, the open calls for Palestinian rights and condemnation of Israel voiced by countless Gulf Arab citizens have largely mirrored official statements from their governments, all of which have condemned the violence in some form. Some have gone further, and Abdulla said he had hoped the United Arab Emirates' (UAE) most recent statement calling "on all parties” to cease fighting would have been bolder and named Israel as the aggressor.

In speaking out, Gulf citizens are challenging the official narratives around normalization with Israel. In Bahrain, civil society groups signed a letter urging the government to expel the Israeli ambassador. In Kuwait, protesters held two rallies and are demanding permission to hold more. In Qatar, the government allowed hundreds to protest over the weekend as Hamas’ top leader delivered a speech. In the UAE, some have openly donned the black-and-white checkered Palestinian keffiyeh on Instagram, while others have tweeted under hashtags supportive of Palestinians.

Last year, the UAE became the first Arab country in over two decades to establish ties with Israel, after Egypt and Jordan in 1979 and 1994, respectively. It was a brazen move that bypassed the Palestinians, who slammed it as treason and a stab in the back. The UAE's move paved the way for three other countries – Bahrain, Sudan and Morocco – to announce similar pacts with Israel in rapid succession.

Bader al-Saif, a Kuwait University professor, said "the sheer un-proportionality” of the conflict has pushed many people to speak out across the Gulf.

"For Israelis to feel secure, they need to feel that they are accepted,” al-Saif said. "That feeling of acceptance cannot be complete without them dealing with the Palestinian issue.”

U.K.-based Saudi scholar Madawi Al-Rasheed, a fierce critic of the Saudi government, said despite the kingdom's widespread crackdown on activists – most of whom are steadfast supporters of Palestinian rights – the outrage expressed by many online reveals the gap between the cautious push by the Saudi leadership to inch closer to Israel and public sentiment in the streets. "It shows that despite several years of adopting a normalization discourse in official Saudi media, the pulse of the people is actually not diverted from the Palestinian cause,” she said.