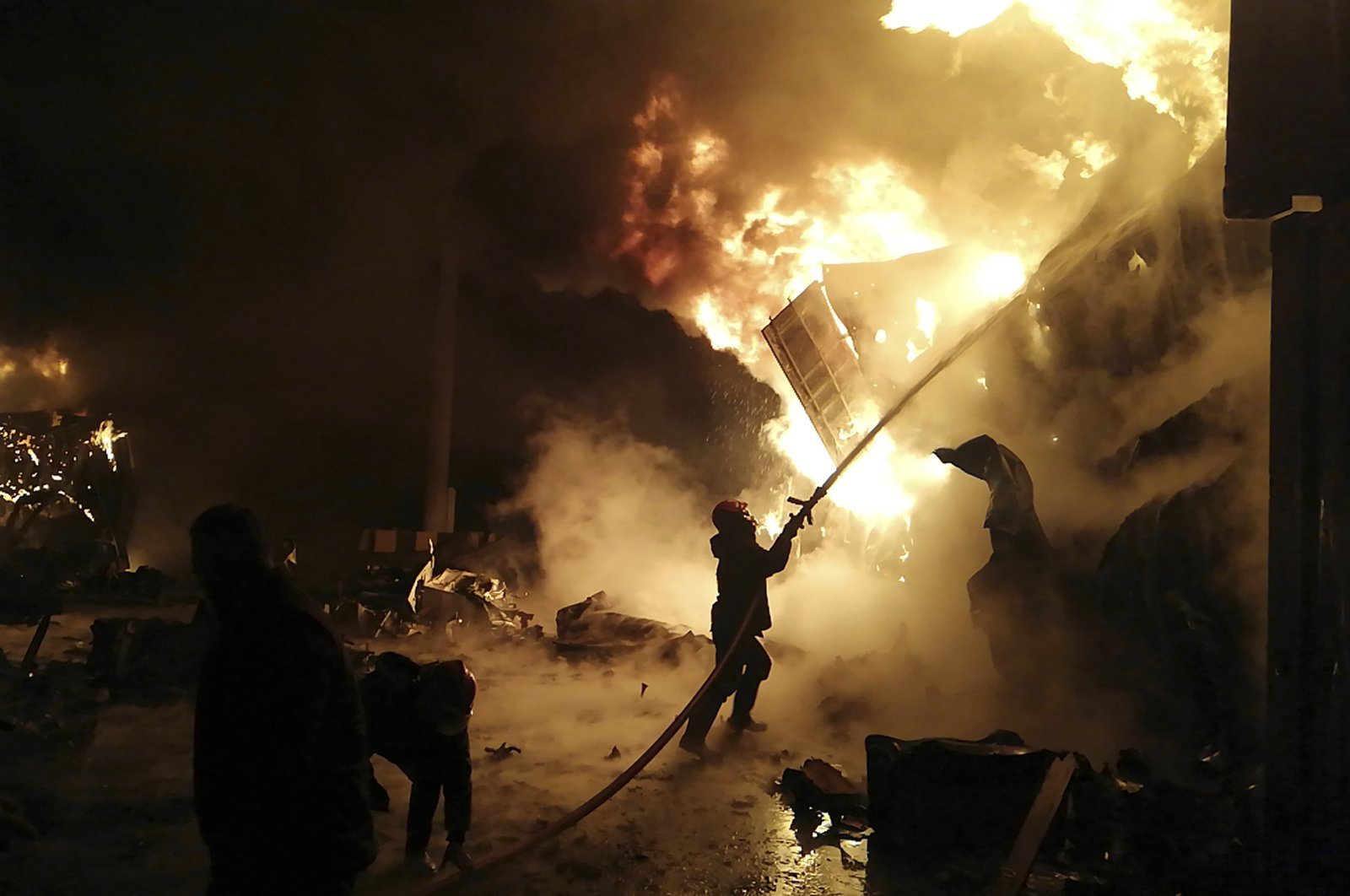 In this photo released by the Syrian official news agency SANA, firefighters work at the scene of missiles attack, at the seaport of the coastal city of Latakia, Syria, Dec. 28, 2021. (AP Photo)
by French Press Agency - AFP Dec 28, 2021 8:48 am
RECOMMENDED

An Israeli air strike hit Syria's Latakia port on Tuesday, the second such attack on the key facility this month, according to Syrian state media.

Since the outbreak of Syria's civil war in 2011, Israel has routinely carried out air strikes on its strife-torn neighbor, mostly targeting Syrian regime's troops as well as allied Iran-backed forces and Hezbollah fighters.

"At around 3:21 a.m., the Israeli enemy carried out an aerial aggression with several missiles from the directio

The strike caused "significant material damage" and led to fires, it added.

Asked about the strike, an Israeli army spokesperson said: "We don't comment on reports in foreign media."

On Dec. 7, Israel carried out strikes on an Iranian arms shipment at Latakia, located in Bashar Assad's western Syrian heartland, without causing any casualties.

That earlier attack, which was the first on the facility since the start of the war, triggered a series of explosions, according to the Syrian Observatory for Human Rights, a U.K.-based monitor with a wide network of sources in Syria.

In November, three soldiers and two Syrian fighters affiliated with Lebanese Shiite group Hezbollah were killed in Israeli strikes, according to the monitoring group.

While the Jewish state rarely comments on individual strikes it carries out on its northern neighbor – with which it is officially at war – it has confirmed hundreds since 2011.

According to a report by the Israeli army, it hit around 50 targets in Syria in 2020.

In the deadliest operation since the strikes began, Israel killed 57 regime force members and allied fighters in eastern Syria overnight on Jan. 13, 2021.

The Israeli military has repeatedly defended the operations as a bid to prevent its archfoe Iran from gaining a foothold on its doorstep.

Israel's head of military intelligence, Major General Aharon Haliva, has accused Iran of "continuing to promote subversion and terror" in the Middle East.

In a shadow war, Israel has targeted Iran's military sites in Syria and also carried out a sabotage campaign in Iran against its nuclear program.

Tehran has been a key supporter of the Syrian regime in the decade-old conflict. It finances, arms and commands a number of Syrian and foreign militia groups fighting alongside the regular armed forces, chief among them Lebanon's powerful Hezbollah group.

The conflict in Syria has killed nearly 500,000 people since it started in 2011 with the brutal repression of peaceful demonstrations.