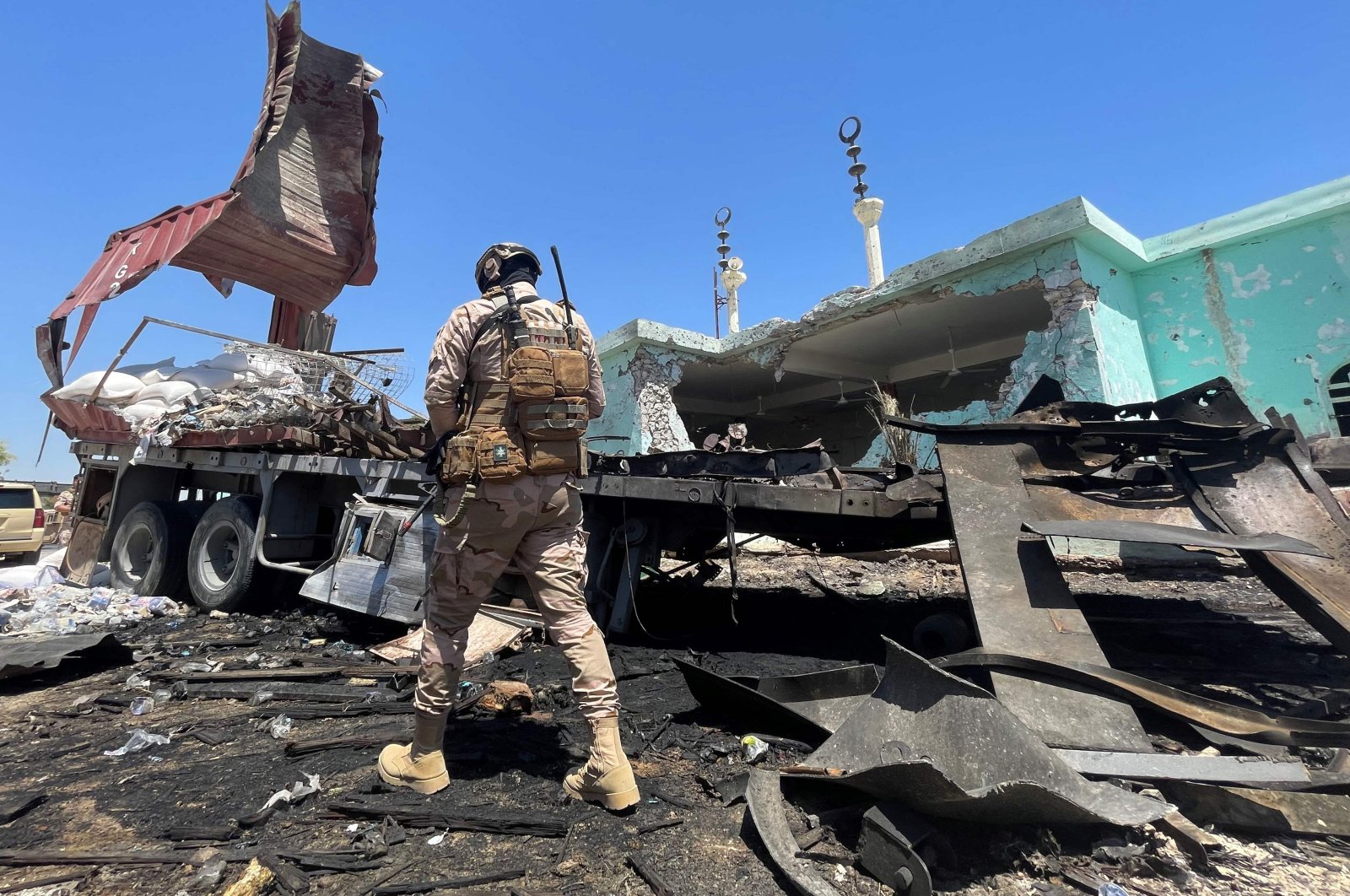 A member of the Iraqi security forces walks past a destroyed vehicle that was carrying rockets amdist sacks of flour, in the district of al-Baghdadi in al-Anbar province on July 8, 2021. (AFP Photo)
by ASSOCIATED PRESS Jul 08, 2021 2:47 pm
RECOMMENDED

Two Katyusha rockets fell near the national security building, and in an open courtyard inside the Green Zone. A third rocket fell in a nearby residential area, damaging a civilian vehicle, the statement by the Iraqi security media cell said.

The attack, which came shortly before daybreak, followed two separate attacks on bases housing U.S. troops in western Iraq and across the border in Syria, where U.S-led coalition forces and YPG/PKK terrorists are based. The drone attack Wednesday in eastern Syria was foiled while 14 rockets landed in Al-Assad Air Base in western Iraq, lightly wounding two personnel.

The attacks come as tension is on the rise between U.S. troops and Iran-backed fighters as Baghdad and Washington negotiate a timeline for foreign troop withdrawal from Iraq.

The U.S. has blamed Iran-backed militias for attacks – most of them rocket strikes – that have targeted the American presence in Baghdad and military bases across Iraq. More recently, the attacks have become more sophisticated, with militants using drones. Late last month, U.S. warplanes hit facilities used by Iran-backed militia groups which the Pentagon said support drone strikes inside Iraq. Four Iraqi fighters were killed in the June 27 airstrikes.

A previously unknown group claimed responsibility for the Wednesday attack on Al-Assad Air Base, saying it was a message to U.S troops in Iraq: "We will force you to leave our lands defeated.”

A drone attack Tuesday was reported on Irbil airport in the northern region, near where U.S. forces are based. In Syria, the U.S.-backed forces said they foiled the Wednesday attack that was using drones on the al-Omar oil field in the eastern province of Deir el-Zour. Hundreds of U.S. troops are stationed in northeastern Syria. Thousands of Iran-backed militiamen from around the Middle East are deployed in different parts of Syria, many of them in areas along the border with Iraq.

A statement from the Security Media Cell, affiliated with Iraq’s security forces, Thursday said these attacks endanger the lives of citizens and targets diplomatic missions and will be responded to forcefully

Iraq’s government had called Wednesday’s attack "a terrorist” one that violates Iraqi laws. Also on Thursday, the spokesperson for the U.S.-led coalition Col. Wayne Marotto said these attacks undermine "the authority of Iraqi authorities, the rule of law and Iraqi national sovereignty.”