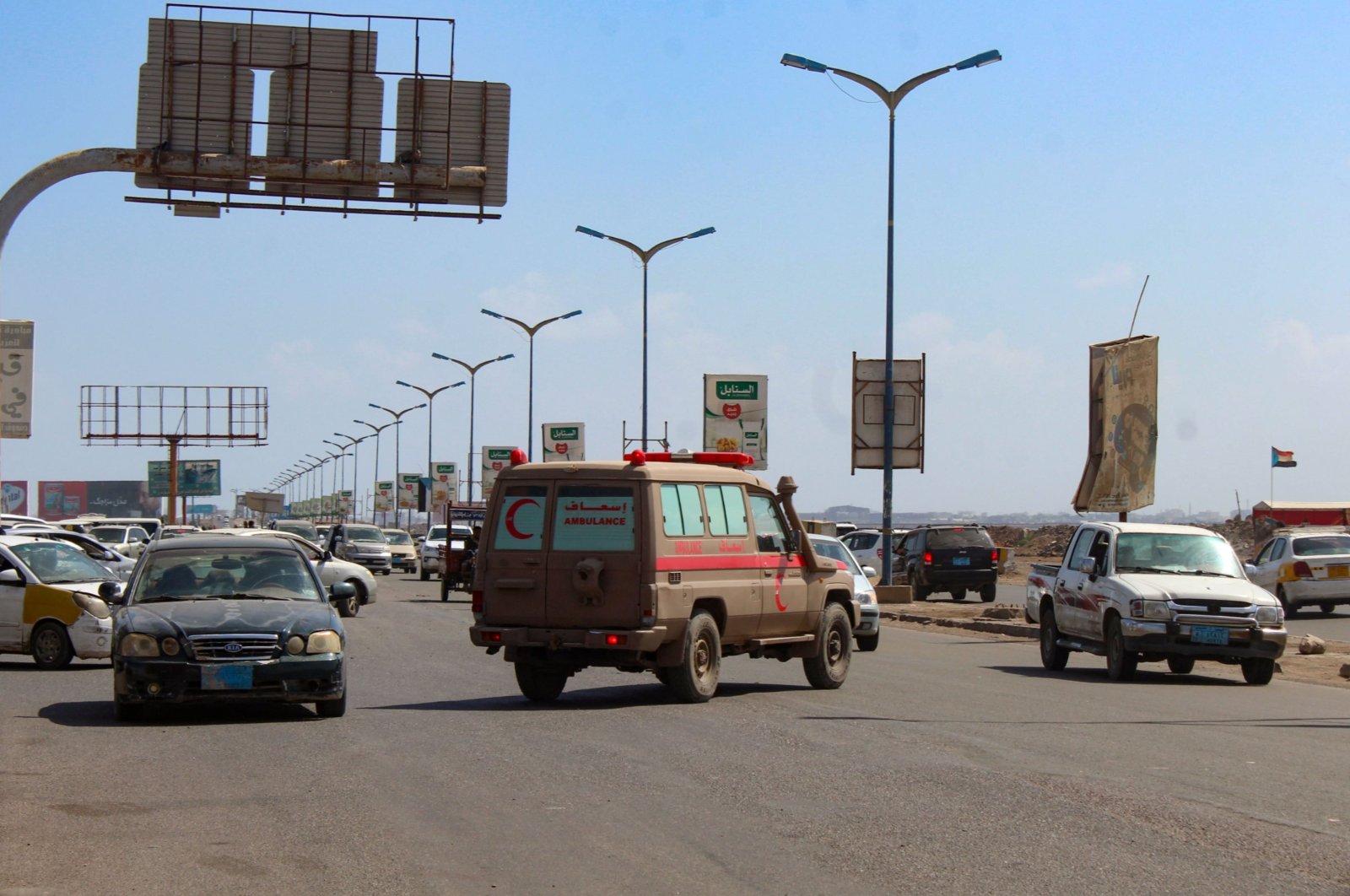 An ambulance is pictured in a street in Yemen's southern city of Aden a day after explosion's rocked its airport, killing or injuring dozens of people, Dec. 31, 2020. (AFP Photo)
by REUTERS
Dec 31, 2020 4:07 pm

Saudi-led coalition warplanes struck targets in Yemen's Houthi-held capital Sanaa on Thursday in retaliation for attacks in the southern port city of Aden the previous day that took place as officials of a government backed by Riyadh arrived there.

The coalition accused the Iranian-backed Houthi movement, which it has been fighting for six years, of staging the attack on Aden's airport and a second one on the presidential palace.

Thursday's coalition airstrikes hit Sanaa airport and several other sites in and around the city, residents said. Loud blasts were heard and warplanes flew overhead for several hours, they also said.

Houthi-run Masirah television said the planes hit at least 15 locations in different districts in the capital. There were no immediate reports of casualties.

Coalition airstrikes have killed thousands, including many civilians, over the course of the war. But they have been less frequent in recent years as the conflict has reached a stalemate, with the Iran-aligned Houthis controlling most population centers and President Abd-Rabbu Mansour Hadi's internationally recognized government – supported by Riyadh and Western powers – basing itself in Aden.

The main war has been eclipsed by a power-struggle between Hadi's government and southern separatists in Aden. Saudi Arabia has been trying to unite them to focus on fighting the Houthis.

At least 26 people were killed and dozens more wounded in Wednesday's attack on Aden airport, which took place just as members of Hadi's new Cabinet arrived from Saudi Arabia. A second attack was made on the Maasheq palace, where they had been taken to safety.

A coalition statement said the alliance had downed an explosive-laden Houthi drone that was targeting the palace.

"The desperate, terrorist attack to target Maasheq palace confirms the responsibility of the terrorist, Iran-backed Houthi militia of the attack in Aden International Airport," the statement said.

There was no immediate reaction from the Houthis, who had earlier denied responsibility for the airport attack.

The Doctors Without Borders (MSF) aid group said 19 people were treated for wounds at its hospital in Aden.

"The missile hit the terminal's gate and we were only meters away... We pulled out people screaming, then I realized that I was wounded myself," Nasser Mubarak, one of the survivors said. Mubarak lied on a bed in MSF's hospital with others wounded mostly by shrapnel. The medical staff showed steel bolts that were removed from some of the victims.

Aden has been mired in violence because of the rift between the separatists and Hadi's government, which has been based there after being driven from Sanaa by the Houthis in 2014. The Southern Transitional Council (STC), which seeks independence for south Yemen, declared self-rule in Aden in April, triggering clashes with Hadi's forces and complicating United Nations efforts to forge a permanent cease-fire in the overall conflict.

The new Cabinet unites the STC with Hadi in an effort to fulfill the Saudi aim of ending the feud. Government officials were among the casualties in the Aden airport attack. Three International Committee of the Red Cross staff members were also killed, the organization said. Yemeni Prime Minister Maeen Abdulmalik said all members of the Cabinet were "fine" and will remain in Aden despite the attack.

However, government officials were among the casualties in the Aden airport attack.

Sara al-Zawqari, ICRC spokeswoman for the Near and Middle East, said a dozen staff members were heading from Sanaa to Djibouti and transiting for a short period in Aden airport when the attack took place.

"We’re still in shock and trying to process everything that has happened since yesterday," Zawqari said.