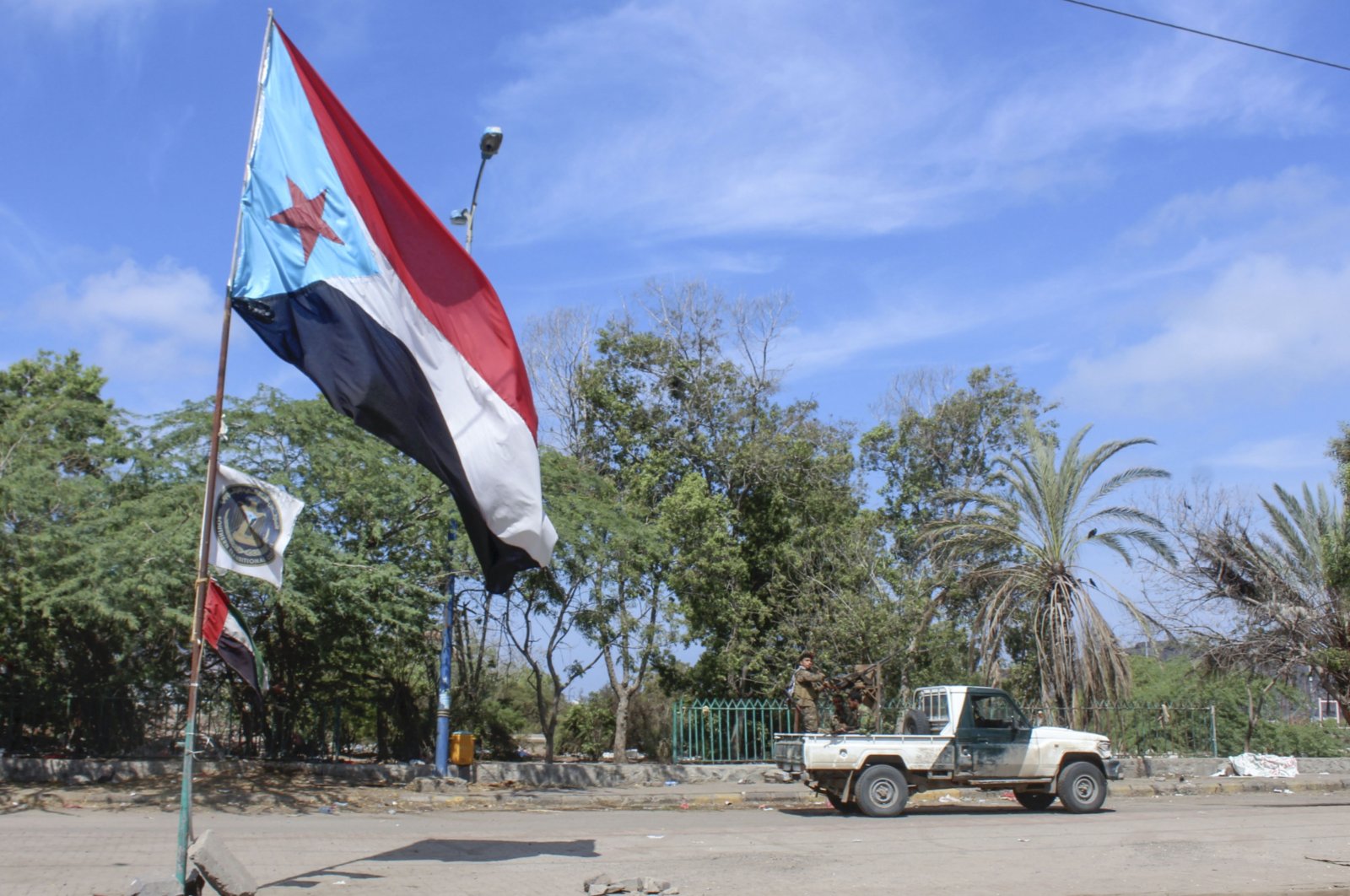 Fighters with Yemen's Southern Transitional Council (STC) drive a vehicle past a separatist flag (the old flag of South Yemen) as they deploy in the southern city of Aden, April 26, 2020. (AFP Photo)
by Compiled from Wire Services Aug 26, 2020 1:40 pm
RECOMMENDED

Fighting resumed in southern Yemen between Yemeni separatists backed by the United Arab Emirates (UAE) and the internationally recognized government, officials said Wednesday. The renewed violence comes after the separatists suspended participation in talks to implement a Saudi-brokered deal.

The secessionist Southern Transitional Council, an umbrella group of militias backed by the UAE, said late Tuesday it had informed Saudi Arabia of the suspension, accusing the government of Yemeni President Abed Rabbo Mansour Hadi of mobilizing forces in the southern province of Abyan.

There was no immediate comment from Hadi’s government, and a spokesman for the Saudi-led coalition embroiled in a yearslong conflict in Yemen was not available for comment.

The separatists’ announcement could thwart Saudi efforts to close a yearlong rift amid a broader war against Iran-backed Houthi rebels.

Fighting resumed overnight between the separatists and government forces in Abyan, where Saudi-led coalition deployed troops in June, officials from both sides said. They spoke on condition of anonymity because they were not authorized to speak with reporters.

The secessionist council, comprised of heavily armed and well-financed militias propped up by the UAE since 2015, when a Saudi-led military coalition launched a devastating air campaign aimed at rolling back Houthi territorial gains.

The group declared self-rule over the key port city Aden and other southern provinces in April before it abandoned its aspirations for self-rule late in July to implement the stalled peace agreement with Hadi’s government.

The power-sharing deal, signed in the Saudi capital of Riyadh last fall, sets the stage to end a long-running rivalry between the two sides. The agreement was never implemented.

U.N. spokesman Stephane Dujarric warned that humanitarian groups were running low on emergency shelter and other non-food items in several districts. Dujarric said the U.N. humanitarian response plan "is only 24% funded,” and he urged donors to pay all outstanding pledges.

Donor countries recently cut back on aid to Yemen amid the coronavirus pandemic and also due to concerns that the aid might not be reaching intended recipients in territories controlled by the Houthis.

The Yemeni government has reported on a little more than 1,900 confirmed virus cases, including 557 deaths in areas under its control. The Houthis reported only three confirmed cases and one fatality, and they stopped reporting cases for over four months. The number of people dying from symptoms of COVID-19, the illness caused by the virus, however, has dramatically surged across the country.

Yemen’s descent into turmoil started in 2014 when Iranian-backed Houthi rebels overran the capital, Sanaa, and much of the country’s north, driving Hadi’s government into exile.

Tens of thousands of Yemenis, including civilians, are believed to have been killed in the conflict, which has led to one of the world’s worst humanitarian crisis as millions remain at risk of starvation.