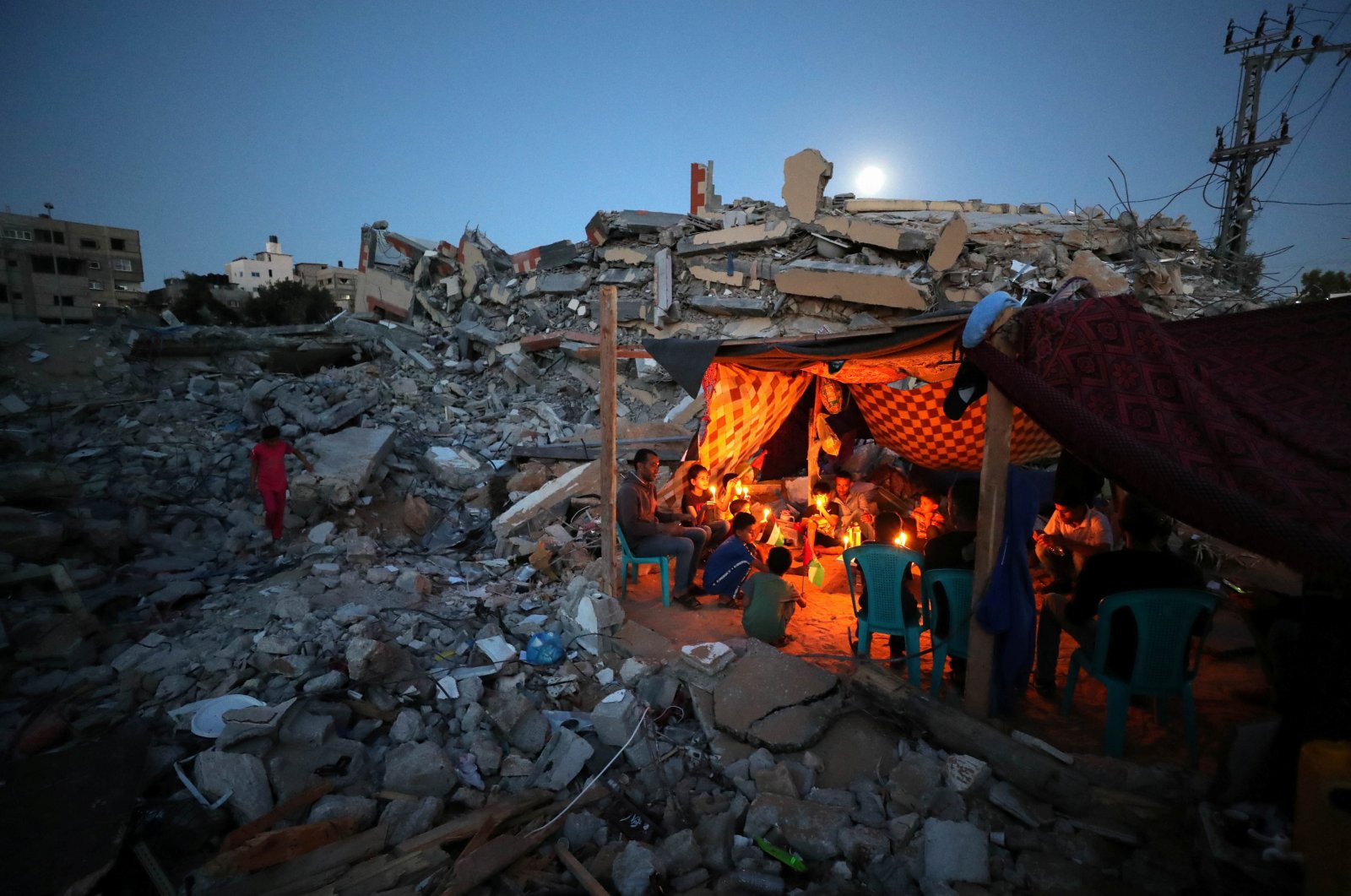 Palestinians from Zawaraa family hold candles as they sit in a makeshift tent amid the rubble of their houses, which were destroyed by Israeli air strikes during the Israeli-Palestinian fighting, Gaza, May 25, 2021. (Reuters Photo)
by Anadolu Agency May 27, 2021 10:18 pm
RECOMMENDED

The special session of the council, which was called to discuss the "serious human rights situation" in the occupied Palestinian territories, ended with the adoption of the resolution put forward by the Organisation of Islamic Cooperation (OIC) coordinator, Pakistan, and the Palestinian state.

The council "decides to urgently establish an ongoing independent, international commission of inquiry, to be appointed by the President of the Human Rights Council, to investigate in the Occupied Palestinian Territory, including East Jerusalem, and in Israel," said the resolution.

The commission will investigate "all alleged violations of international humanitarian law and all alleged violations and abuses of international human rights law leading up to and since April 13, 2021, and all underlying root causes of recurrent tensions, instability, and protraction of conflict, including systematic discrimination and repression based on national, ethnic, racial or religious identity," it added.

The resolution calls on all states, international agencies, and other donors to urgently mobilize humanitarian support for the Palestinian civilian population in the Occupied Palestinian Territory, including East Jerusalem.

It urges them "to address their prevailing needs, and calls upon Israel, the occupying power, to ensure the unimpeded delivery of that humanitarian assistance."

The resolution was adopted by 24 votes, with 9 countries voting no and 14 abstaining.

Countries that voted no included Austria, Czech Republic, Hungary, Germany, Malawi, the United Kingdom, and Uruguay, arguing that this would be an unprecedented ongoing investigation.

Ibrahim Khraishi, Palestinian representative at the U.N. in Geneva, said: "It's a good step towards reaching in some way, the justice for the Palestinian people and to go through this fact-finding commission of inquiry.

"I think that it will establish a new mechanism of monitoring of the Israeli occupying power inside Israel and West Bank, Gaza and East Jerusalem.

"This is an ongoing mechanism, it will not be renewed until the end of the occupation."

Venezuela's representative strongly condemned Israel for "crimes against humanity that amount to genocide."

Meirav Eilon Shahar, Israel's ambassador to the U.N. in Geneva, said after the session, "Hamas will not be held accountable for its war crimes and will not be the focus of this investigation."

After the vote, the U.S. mission in Geneva put out a statement saying, "The United States deeply regrets today's decision by the Human Rights Council to establish an open-ended Commission of Inquiry into the recent violence between Israel and the Palestinians."

"The actions of the Human Rights Council today do not contribute to peace. They will not help bring about lasting solutions to the challenges in the region, nor provide greater dignity, freedom, or prosperity for either Palestinians or Israelis," it added.

At least 230 Palestinians were killed, including 65 children and 39 women, and 1,710 others injured in Israeli attacks on the Gaza Strip since May 10, according to the Palestinian Health Ministry.