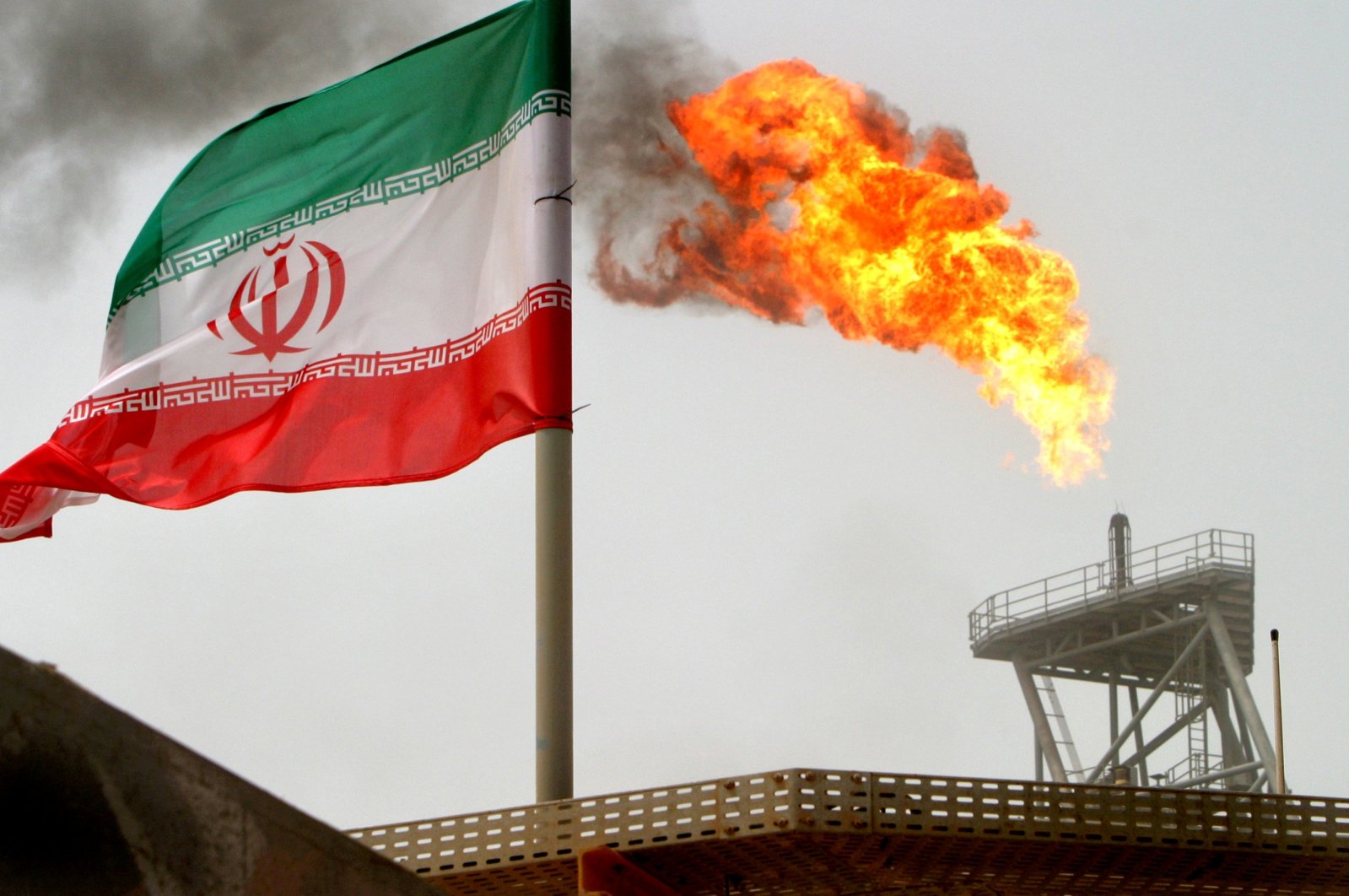 A gas flare on an oil production platform in the Soroush oil fields is seen alongside an Iranian flag in the Persian Gulf, Iran, July 25, 2005. (Reuters Photo)
by DAILY SABAH Feb 11, 2021 12:25 pm
RECOMMENDED

The U.S. has sold 1 million barrels of Iranian fuel seized under sanctions, a Justice Department spokesperson said, noting that the profits will be donated to a fund for U.S. victims of state-sponsored terrorism.

The official said that the U.S. sold over 1 million barrels of Iranian oil seized last year under the former Trump administration, adding that it plans to seize another cargo of crude oil from Iran. The seizing of Iranian oil shipments is allowed under the current U.S. sanctions imposed on Iran in response to its nuclear program and the U.S.' classification of several Iranian groups as terrorists. Iran has denounced the allegations amid the ongoing dispute between the two nations.

The U.S. seized the shipments, which were moved to new containers and shipped to the U.S. The fuel, by far the largest seizure of Iranian oil by the U.S., will be sold and distributed as compensation to U.S. victims of state-sponsored terrorism.

U.S. Department of Justice official Marc Raimondi told Reuters that the sale had been completed but the government was “still working out the final expenses." While the value of the seized fuel has not been announced, compared to European gasoline prices, the sale could equate to tens of millions of dollars.

“The petroleum has been seized, and an interlocutory sale has preserved the cash value of the petroleum, which is now held by the US Marshals Service,” Raimondi said.

Once an order of forfeiture has been submitted to the U.S. District Court, “then the funds will be transferred to the US Victims of State Sponsored Terrorism fund," Raimondi noted.

The U.S. filed a lawsuit last week to seize another shipment of crude oil from Iran in an alleged breach of U.S. terrorism regulations. Iran, as stated on the bill of lading, has not commented on the tanker yet.

Refinitiv ship tracking data reported that the shipment, loaded onto the Liberian-flagged Achilleas tanker, was in Caribbean water and was scheduled to arrive in the U.S. Gulf port of Galveston, Texas on Feb. 15.

What the tanker was carrying or what agent would be handling the unloading was unknown to pilot groups in Galveston and Houston, Texas.

The U.S. and Iran have had an ongoing dispute, with relations only worsening under the administration of Donald Trump.

Ties were particularly tested by events instigated by the U.S., such as when it withdrew from the 2015 nuclear accord with Iran and six other world powers, imposed sanctions on Tehran and killed the leader of the Iranian Revolutionary Guards' Quds Force Gen. Qassem Soleimani in a January 2020 airstrike.

U.S. President Joe Biden advocates for diplomacy in dealing with Iran, under the condition that Iran complies with the 2015 nuclear accord, but Washington will not lift its sanctions to coax Iran to the negotiating table, Biden said last week. Iran has warned that it may pursue a nuclear weapon program if the sanctions remain in place.