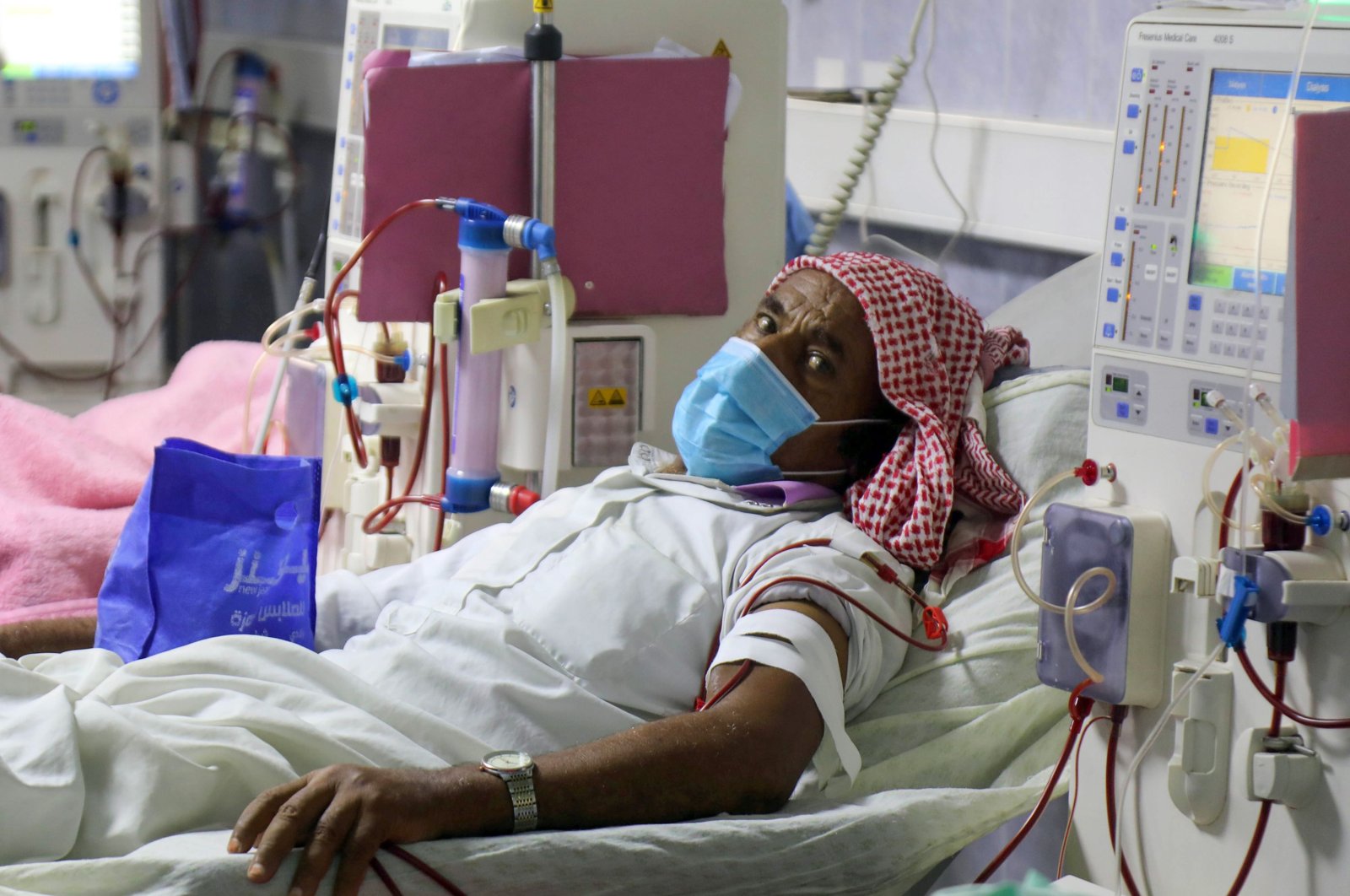 In the darkness, the bodies of suspected victims of the coronavirus are carried in silence, one after the other, to be buried in several cemeteries across northern Yemen. Flashlights flicker as mourners make their way through the shadows.

The corpses are washed with disinfectants and wrapped in layers of plastic sheets and white linen before being laid to rest in 2-meter (6-foot) -deep pits. There is no one around except for a handful of relatives in masks, gloves and white gowns. Large gatherings are not permitted. Phones are not allowed.

Gravediggers and guards at the cemeteries are warned not to speak about the causes of the deaths. If asked, they are told to say that the dead are “unidentified bodies from the war,” according to several residents and one gravedigger. Families are never really told if their relatives died from the coronavirus, which is believed to be the culprit. Test results are never released. These daily funeral rituals come as social media is flooded with condolences and photographs of the dead.

The coronavirus is spreading throughout Yemen, a county that has been devastated by five years of civil war. The fighting is between the Iranian-backed Houthi rebels who control the capital Sanaa and much of the country’s north, and a U.S.-backed, Saudi-led coalition fighting on behalf of the internationally recognized government.

The fighting has already killed more than 100,000 people and displaced millions. Years of aerial bombings and intense ground fighting have destroyed thousands of buildings, leaving half of Yemen’s health facilities dysfunctional. About 18% of the country’s 333 districts have no doctors. Water and sanitation systems have collapsed. Many families, especially among the millions displaced by fighting, can barely afford one meal a day.

The COVID-19 pandemic has added to the deadly toll of the war in Yemen, crippling a health system already in shambles with little capacity to test those suspected of having the virus. The country has no more than 500 ventilators and 700 ICU beds nationwide. There is one oxygen cylinder per month for every 2.5 million people.

The situation is exacerbated in the Houthi-controlled north, where the rebels have suppressed information about the virus, severely punished those who speak out, enforced little mitigation measures and promoted conspiracies and claims by the Houthi minister of health that their scientists are working on developing a cure for COVID-19 to present to the world.

Officially, the rebels say that only four cases of the coronavirus have been detected in the regions they control, but have resisted making the number of positive cases and deaths public.

“We don’t publish the numbers to the society because such publicity has a heavy and terrifying toll on people’s psychological health,” said Youssef al-Hadhari, spokesman for the Houthi health ministry, in response to questions by The Associated Press (AP).

His comments come two months after Houthi Minister of Health Taha al-Motawakel painted a bleak picture of the country’s readiness to deal with the virus, saying that at some point Houthi officials will have to deal with 1 million people in need of hospital admissions in a two-month period. He told a parliament session that at one point, doctors will have to choose between whom to rescue and whom to let die.

This is “battlefield medicine,” he said.

The World Health Organization (WHO) believes that there is a significant undercount of the total number of people affected by the coronavirus outbreak, which officials say could further hinder efforts to get the medical supplies needed to contain the virus.

Richard Brennan, the WHO’s regional emergency director, told the AP that he believes the COVID-19 deaths are in the hundreds and cases are in the thousands, based on what he has heard from numerous health providers in Yemen.

Local health officials, aid workers, residents and community activists, who all spoke on condition of anonymity to discuss the pandemic, say the situation in the war-torn country is worsening fast. Local unions, who have kept their own death tallies from the coronavirus, report that 46 medical staffers, 28 judges and 13 lawyers died in a three-week period between mid-May and early June, well above the Houthis’ official count.

The lack of information about the true number of people infected by the coronavirus in Houthi-controlled areas has led to wild speculation about the nature of the disease, and the rebels' response to dealing with the infections and deaths has only added to the confusion.

The rumor, which was given credibility because of a supposedly confidential document allegedly signed by the health minister, gained so much traction that Houthi leaders took the unusual step of issuing an official denial, calling the rumor “lies aimed at spreading fear.” The Houthis themselves have also spread rumors that the virus was spread by outsiders.

Some hospitals, like the Jibla hospital in the northern province of Ibb, one of the worst-hit areas, have been called “injection hospitals” because of the high number of deaths happening there, residents and local activists said.

These rumors have caused widespread panic, and residents say they are less likely to notify health officials about suspected cases of COVID-19.

“People don’t go to hospitals for fear of the mercy injection,” said a local activist, referring to the Jibla hospital. “We can’t tell the truth from the fallacy but I know many people who died in mysterious ways inside this hospital.”

A lawmaker in Sanaa told the AP that people are afraid to report coronavirus cases, fearing retaliation from Houthi officials.

“The suspected cases are treated like war criminals,” he said.

The lawmaker and a local activist from Ibb province said that the Houthis have gone through great lengths to contain information about the spread of COVID-19 in the rebel-controlled region.

At the Jibla hospital, which has has been turned into a COVID-19 isolation facility, the rebels have appointed a security supervisor to control the flow of information in and out of the hospital.

“He is the one in charge, meaning the head of the hospital himself is powerless in the face of this official. All staffers in the hospital fear him,” the activist said.

In a phone call with the AP, Abdullah al-Matari, the head of the hospital, declined to comment. He referred questions to the ministry’s top officials.

Residents said militiamen working as security personnel in the hospital also search visitors for phones and prevent them from carrying the devices inside the quarantine wards.

The Houthi information blackout extends beyond the hospitals. When a local activist posted a picture of an ambulance on social media of two medical workers in protective gear washing the vehicle in a pond, one of the men said they said they just finished transferring eight bodies to the Jarraf cemetery.

When the picture went viral on social media, the man who spoke was interrogated and suspended from his job, the activist said. The AP could not independently verify his account.

Deaths from suspected coronavirus cases have surged to the point that, at the end of May, the Houthi religious endowment ministry, which is in charge of cemeteries, hung a sign on one of Sanaa’s largest cemeteries that read: “Khazima cemetery is full.”

Residents say it’s hard to find a burial plot for less than a quarter-million rials, or $500 – five times the salary of a government employee. Burials are spread out all over Sanaa cemeteries so as not to attract any attention to the numbers, residents said.

Secretly filming the burials on smartphones in defiance of the Houthi orders has become an act of heroism, local residents said in interviews, adding that the amateur videos give Yemenis the only true glimpse of the true impact of COVID-19 in the region.

The outbreak in the Houthi-held territory is taking place amid simmering tension between the rebels and United Nations agencies, which are running short of funding for aid programs.

Last week, the U.N. announced that it was about $1 billion short of what aid agencies say is needed to address Yemen’s humanitarian needs and a deteriorating health care system made worse by the coronavirus.

“The situation is catastrophic,” said one aid worker of an international agency working in Yemen. “Now the COVID-19 outbreak, the suspension of funding, the tension between donors and the authorities, we have less money, and more needs. It’s terrible.”