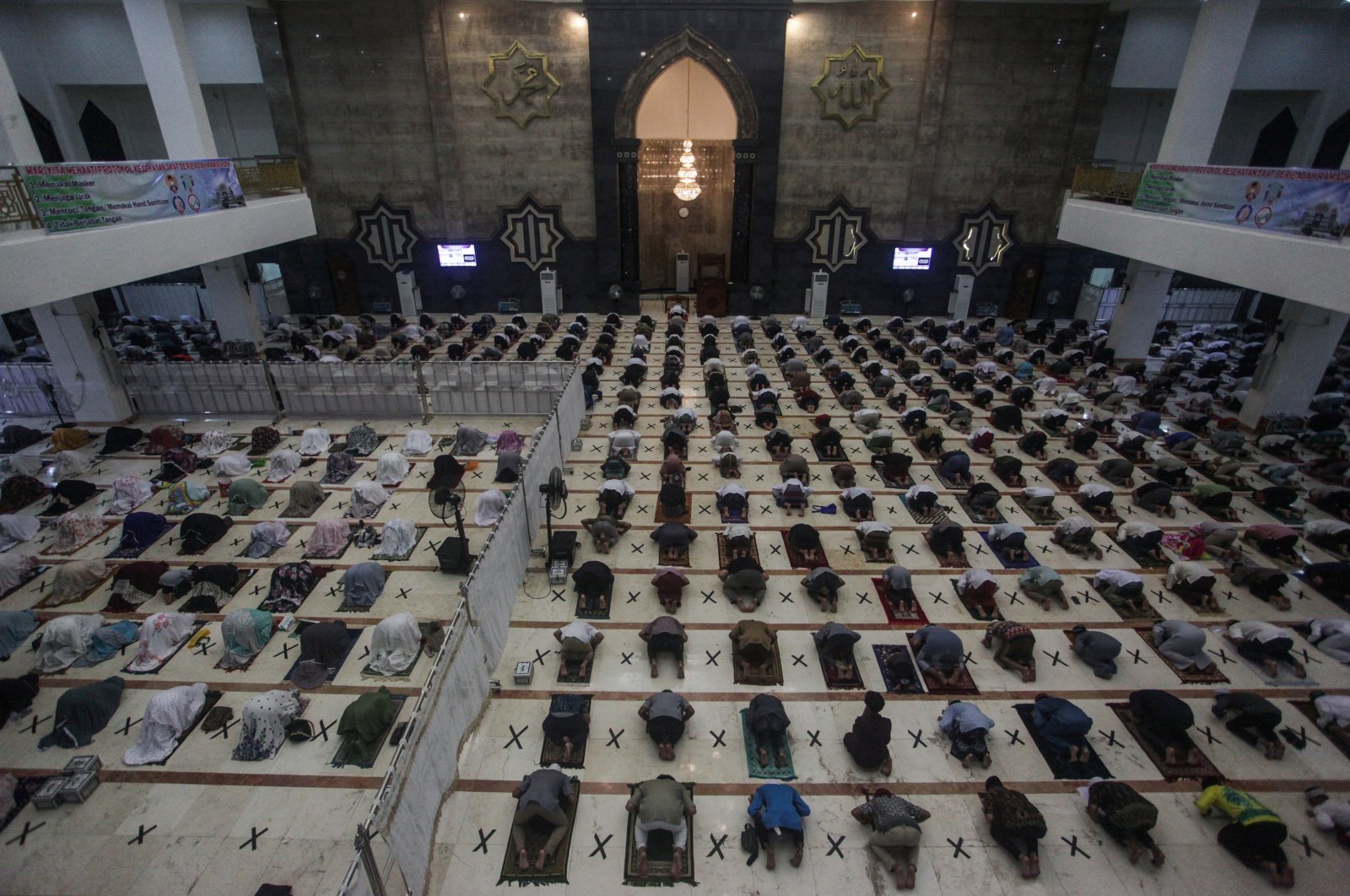 People pray ahead of the holy fasting month of Ramadan, as mosques reopen amid the COVID-19 pandemic in Palangkaraya, Central Kalimantan province, Indonesia, April 12, 2021. (Makna Zaezar/Antara Foto via Reuters)
by Agencies Apr 13, 2021 12:37 pm

On Tuesday, the Islamic faithful around the world began their holy month and while some locations imposed restrictions to curb the spread of the coronavirus, some states allowed citizens to visit mosques for prayers with strict health protocols in place

As Muslims began marking Ramadan on Tuesday, this year's holy month of fasting, prayer, reflection and fellowship will be different from the previous year as vaccines are now available and some COVID-19 restrictions have been lifted.

In Indonesia, vaccines are being administered and the government is loosening restrictions. Mosques were allowed to open for Ramadan prayers with strict health protocols in place, and with malls and cafes open, passers-by could again see curtains shielding the sight of food from people fasting.

The holy month is marked by intense prayer, dawn-to-dusk fasting and nightly feasts. Last year, authorities shuttered all mosques and clerics issued a fatwa, or edict, urging Muslims to pray at home over the holy month rather than congregate in crowded spaces and risk spreading the virus.

Muslims this year are expecting a virus resurgence but all mosques will be continuing to adhere to social distancing and other precautions, which will significantly reduce crowds, said Nasaruddin Umar, imam of Jakarta’s Istiqlal grand mosque.

"I miss everything of Ramadan already,” Umar said. "The heart of faithful Muslims is tied to the mosque ... the longing for Ramadan lovers has finally been relieved today although the pandemic has not yet ended.” In the capital, Jakarta, authorities disinfected 317 mosques on Sunday in preparation for Ramadan, said Jakarta Gov. Anies Baswedan.

Social distancing markers have been installed and soap and hand sanitizers have been prepared. The government also will allow people to hold iftar gatherings during Ramadan in restaurants, malls and cafes, which can serve customers up to 50% of their capacity and follow strict health guidelines. Iftar occurs at sunset, the time Muslims break their fast and usually the prime time for people to have dinner together with friends and family members before the night prayer.

"Easing restrictions is like a breath of fresh air for us who are tired by this COVID-19 outbreak,” said Anna Mardyastuti, a resident in Jakarta. "Yes, they should act to stop the virus, but not block the door to worship or to change our tradition of Ramadan entirely,” she said.

In Malaysia, Wan Noradriana Balqis, 21, welcomed the return of community prayers in mosques but said she will avoid Ramadan bazaars that are often packed with people.

"I don’t think it’s a good idea to reopen the bazaars. The rules are there but many people don’t follow them,” the database administrative officer said.

Malaysia's coronavirus cases have more than tripled since January to more than 362,000, with daily increases exceeding 1,000. Indonesia is the worst-hit country in Southeast Asia with over 1.5 million infections as of Monday and more than 42,600 deaths.

Indonesia will maintain its vaccine rollout through Ramadan as officials tried to ease worries over the Islamic teaching that Muslims should refrain "from anything entering the body” between sunrise and sunset. Indonesia’s top Muslim clerical body said Muslims eligible for vaccinations are not only allowed but "required” to get them during Ramadan. Although Muslims abstain from all food and drink in daylight hours during Ramadan, the vaccine enters muscle rather than the bloodstream and is not nutrition, so it does not invalidate fasting, said Asrorun Niam Sholeh, the head of fatwas for the Indonesian Ulema Council.

"If we carry on taking our vaccines, we can ensure that next Ramadan we do return to some normality,” Sholeh said, according to remarks carried by The Associated Press (AP). Some vaccine sites in Jakarta are extending their opening hours so Muslims can come after they have broken their fast. Indonesia plans to vaccinate two-thirds of its population of about 270 million people – or just over 180 million people by the end of next year. The current priorities are health care workers, the elderly and other at-risk populations, and the two-dose vaccine will be free for all Indonesians.

In India, which is experiencing an explosive spread of the virus, Muslim scholars are appealing to their communities to strictly follow anti-virus protocols and refrain from organizing large gatherings. Ramadan prayers begin Tuesday night and fasting begins Wednesday in the country with 200 million Muslims.

Many Indian cities dealing with major virus surges have imposed night curfews, and it remains unclear whether the faithful will be allowed to offer taraweeh. Muslims in Indian-controlled Kashmir are still suffering from the two back-to-back lockdowns that left tens of thousands without any means to earn their livelihoods.

The disputed region, the only part of the Hindu-dominated country that is majority Muslim, was under an unprecedented military lockdown in 2019 for months before the coronavirus lockdown last year. Local charities, like last year, have planned to distribute Ramadan ration kits for needy and destitute families.

India on Monday reported more than 161,000 new cases – the seventh consecutive day that more than 100,000 infections have been recorded. Experts have warned that huge, mostly maskless crowds at political rallies and religious festivals have fueled India's caseload, and in the Himalayan city Haridwar, maskless Hindu pilgrims have ignored social distancing pleas. Adding Sputnik to its roster of jabs bolsters the government's ambitious goal of vaccinating 300 million people by the end of July. Maria Van Kerkhove, the World Health Organization's (WHO) technical lead on COVID-19, said the world was now at a "critical point" of the pandemic.

"The trajectory of this pandemic is growing ... exponentially. This is not the situation we want to be in 16 months into a pandemic when we have proven control measures."

Saudi Arabia, home to Islam's holiest shrines, announced that the holy fasting month was to start on Tuesday, though authorities said only people immunized against COVID-19 will be allowed to perform the year-round umrah pilgrimage from the start of Ramadan, according to Agence France-Presse (AFP).

In Egypt, restrictions were much less stringent than last year as people took to the streets to mark the start of the fasting month.

Pakistanis will only begin fasting Wednesday after rival moon-sighting committees agreed to a nationally applied start of what is called "Ramazan" in the country. With the country in the grip of a third wave of the coronavirus – the deadliest so far – the government urged mosques to only allow prayers in open courtyards and to strictly enforce social distancing.