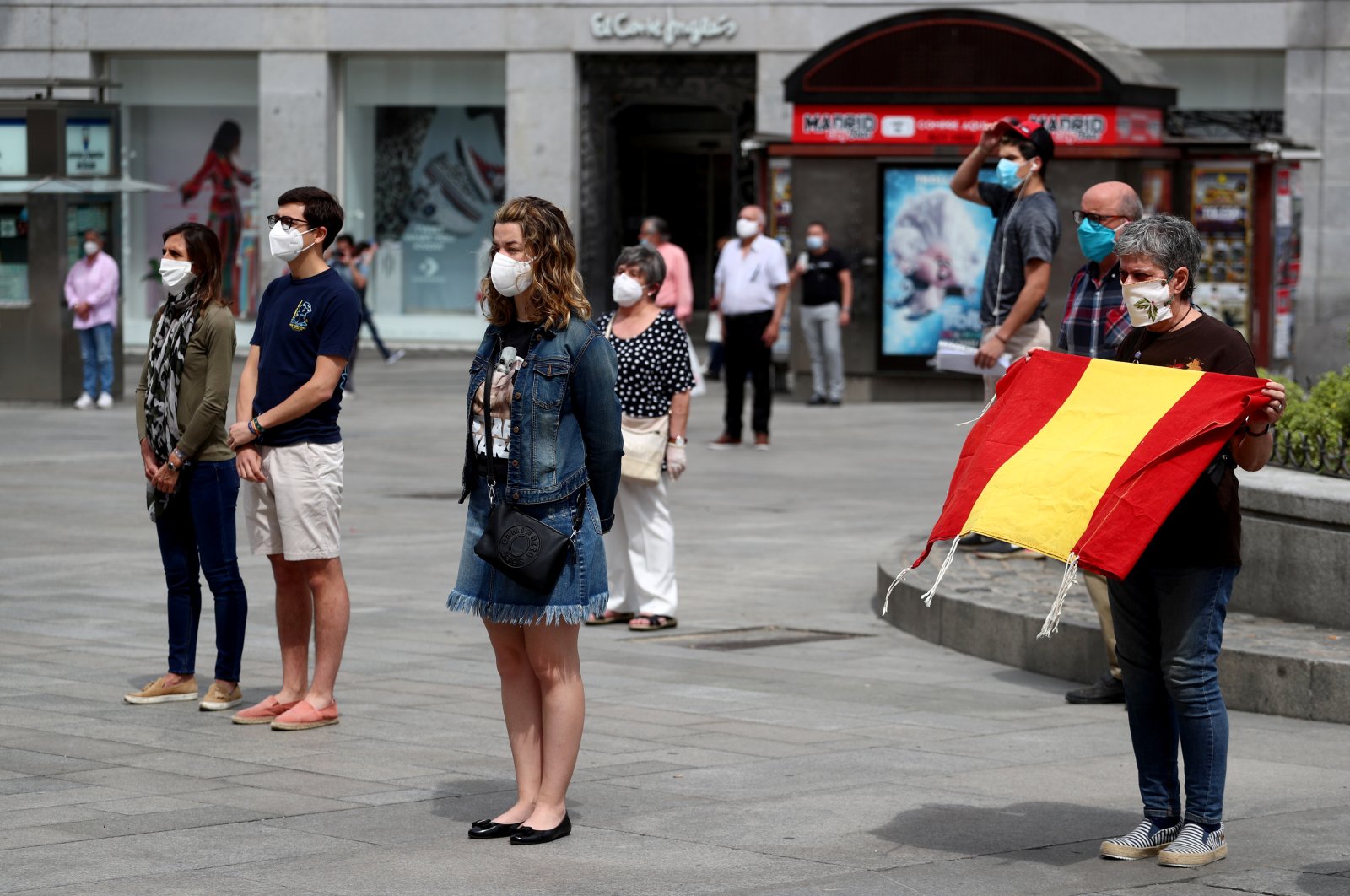 People wearing protective face masks stand during a daily minute of silence to commemorate victims of the coronavirus disease (COVID-19), at Puerta del Sol square in Madrid, Spain, May 26, 2020. (Reuters Photo)
by Compiled from Wire Services May 26, 2020 7:09 pm
RECOMMENDED

The Spanish government has declared a 10-day period of national mourning starting Wednesday for more than 27,000 people who have died with the novel coronavirus in Spain, the longest official mourning period in the country’s democratic history.

Flags will wave at half-mast in more than 14,000 public buildings across the nation and on Spanish naval vessels until June 5, under the declaration made Tuesday. King Felipe VI, as Spain's head of state, will preside over a solemn memorial ceremony once the country emerges from the lockdown imposed two and a half months ago, the government said.

Writing on Twitter, Spanish Prime Minister Pedro Sánchez said it would be "10 days, the longest period of mourning in our democracy, in which we will all express our sorrow and pay homage to those who have died."

The dead included “men and women whose lives have been suddenly cut short, leaving friends and family in great pain, both from the sudden loss and from the difficult circumstances in which it has occurred,” government spokeswoman María Jesús Montero said following the Cabinet meeting where the grieving period was approved.

Opposition parties had criticized Sánchez's left-wing coalition government for not paying tribute to the virus pandemic's victims as Spain's death toll – the world’s fifth-highest after the United States, the United Kingdom, Italy and France – became a point of political debate.

Arguing that some unconfirmed virus cases had been erroneously counted, Spanish health authorities reduced the country's official mortality figure by 1,918.

Montero said that 80% of Spain's virus-related deaths were inflicted on those aged 70 or older, "who helped build our country as we recognize it today, and ultimately laid the foundations of our democracy."

“They might not accompany us physically, but they will remain forever in our memory,” she said.

In Italy, the military’s aerobatic team honored the dead over the past few days, saluting cities such as Codogno, Milan and Turin with flybys. Nightly or weekly rounds of applause and singing to honor medical personnel working to save lives has been the clearest expression of collective unity amid personal losses and the isolation of lockdowns.

China, where the virus emerged late in 2019 and has now officially killed 4,634 people, held a national day of mourning on April 4, while Italy, which has so far suffered almost 32,955 deaths, mourned the victims on March 31.

And this week, the United States lowered its flags to half-mast for three days to remember its dead, who now number more than 98,200, the heaviest toll in the world.

No other country so far has announced an observance on the scale of Spain's 10-day mourning period, an event unprecedented since the country reinstated the democratic rule in 1978. Three years earlier, when dictator Gen. Francisco Franco died, a 30-day mandatory mourning period was declared. Three days of mourning were observed in March 2004 for nearly 200 victims of Al-Qaeda-inspired attacks on Madrid commuter trains.

COVID-19 deaths have become a touchy issue for Sanchez's government since it imposed a strict lockdown on March 14 with the aim of slowing the spread of the virus.

Spain's Health Ministry reported on Tuesday that a total of 27,119 people had died from the coronavirus since the beginning of the outbreak. Confirmed cases of the virus reached 236,259, the ministry said.

Spanish politicians across the political spectrum have raced to capitalize on the collective loss.

National flags with a black-ribbon have appeared on the balconies of apartment buildings and in the hands of right-wing protesters, a symbol of the country's loss and of anger over the government’s handling of the pandemic.

Authorities in the hard-hit Madrid, a stronghold of the conservative opposition, put gigantic displays of black ribbons at some of the Spanish capital's main landmarks. As a permanent tribute to COVID-19 victims, local officials installed a cauldron with a gas-powered flame in front of City Hall. A plaque, surrounded by floral bouquets, reads, “Your flame will never go out in our heart.”

In recent weeks, strict home-confinement orders and bans on public activity have eased across the country.

“They should have declared the mourning days ago,” Madrid resident Conchita Hernández, 77, said. Her husband, Agustín Álvarez, 77, compared the Spanish capital’s nearly 9,000 virus-related deaths to the casualties during times of war.

“The mourning would have made more sense when we were all homebound, but I still think it makes a lot of sense,” Álvarez said.