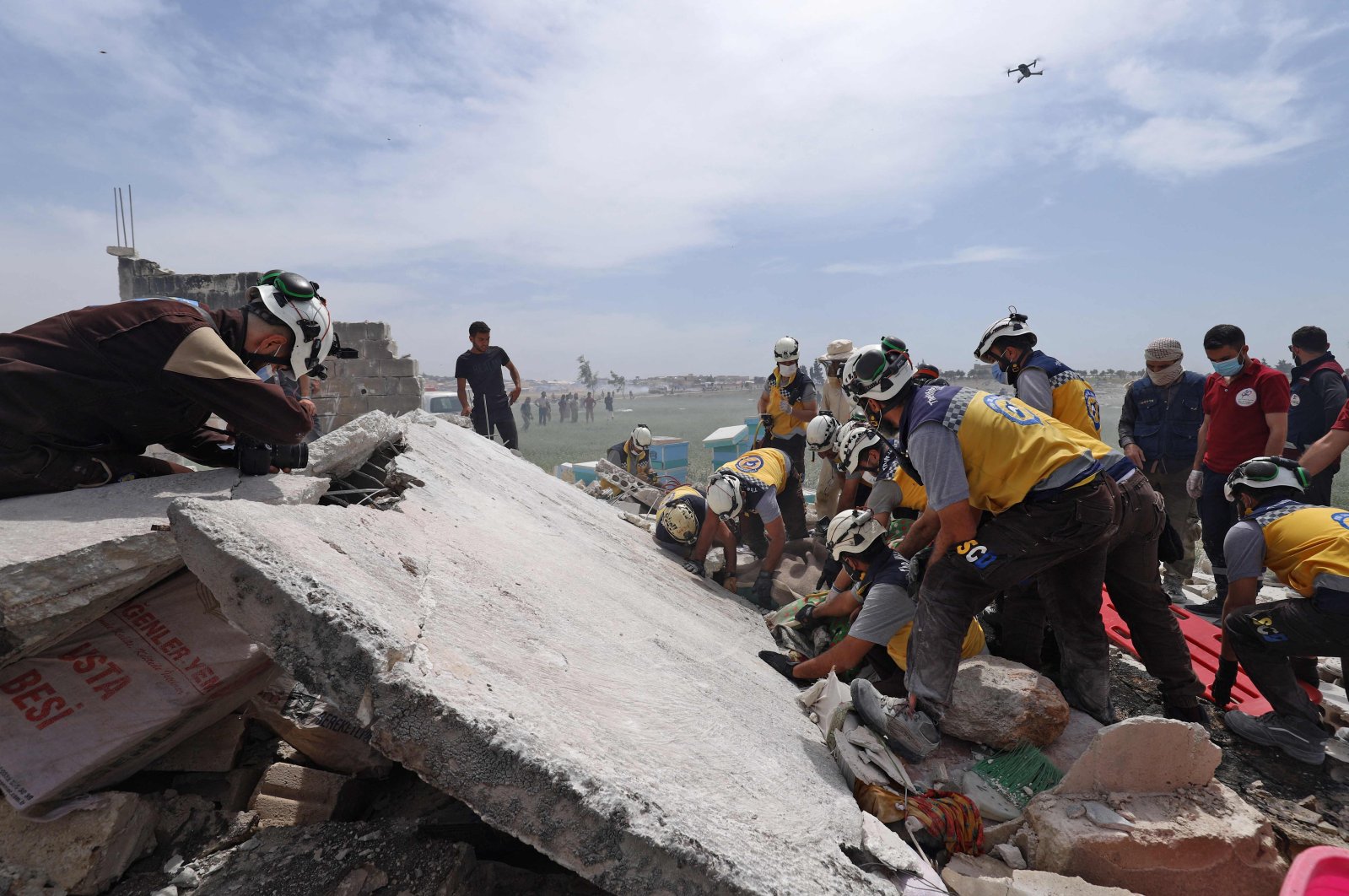 Members of Syria's Civil Defence service (White Helmets) look for wounded people in the rubble after a reported explosion in a depot close to a camp for the internally displaced near al-Fua, in the country's northwestern Idlib province, May 3, 2021. (AFP Photo)
by DAILY SABAH May 09, 2021 12:23 pm
RECOMMENDED

Attacks carried out by the Bashar Assad regime and Iran-backed terrorist groups have killed two civilians, including a child, and wounded another six in the northwestern Idlib province late Saturday.

According to the White Helmets civil defense group, regime forces targeted the Atarib district of the last major opposition bastion, Idlib. While two civilians died in the incident, the other six were transferred immediately to the hospital.

Earlier that day, regime forces continued their bombardment on northern Syria, targeting Bazabur village in the Idlib countryside with artillery shells. “The White Helmets responded and witnessed the massive destruction of civilian homes, and no casualties were recorded,” the group said.

A fragile truce was brokered between Moscow and Ankara in March 2020 in response to the months of fighting by the Russia-backed regime. Almost a million people have fled the Assad regime’s offensive. The regime still frequently carries out attacks on civilians, hindering most from returning to their homes and forcing them to stay in makeshift camps.

For years, the Bashar Assad regime has ignored the needs and safety of the Syrian people, only eyeing further gains of territory and crushing the opposition. With this aim, the regime has for years bombed vital facilities including schools, hospitals and residential areas, causing the displacement of almost half of the country’s population while adopting policies to make their lives more difficult.

Despite the dire condition of the country and its people, the Assad regime announced that it will hold elections on May 26. The vote is expected to keep Assad in power in the country devastated by a decade of civil war.

The election comes as Syria is also mired in a deep economic crisis, worsened by sanctions, the pandemic and financial turmoil in Lebanon.

Recently, forcibly displaced Syrians in Idlib denounced the Assad regime's upcoming presidential elections as "illegitimate," underlining that it is unacceptable for someone who kills his own people and has displaced millions to hold polls in the country.

Syria's war has killed more than 387,000 people and displaced millions since starting in 2011 with the brutal suppression of anti-government protests.