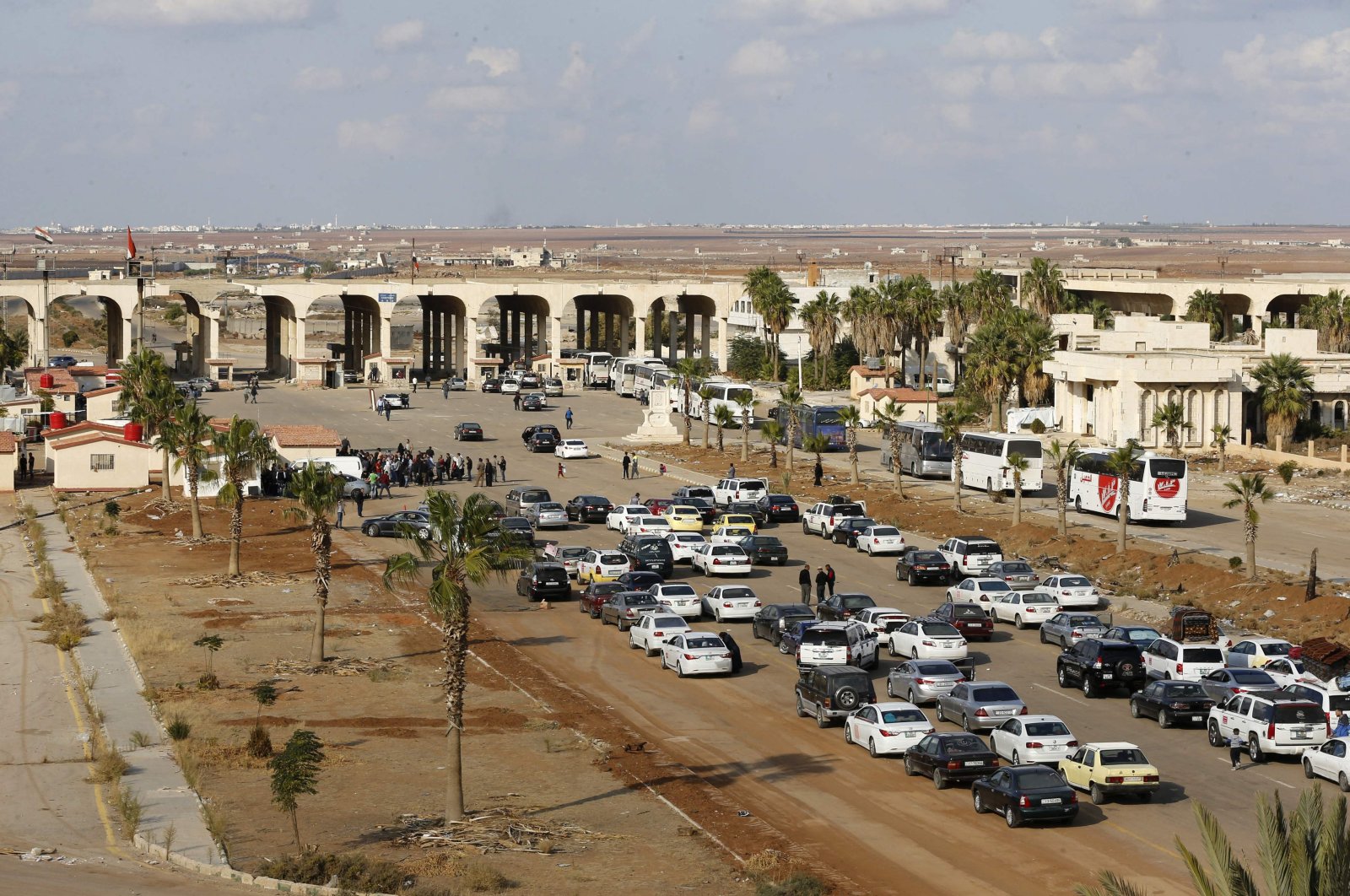 Vehicles wait to cross into Syria at the recently reopened Nassib/Jaber border post in Daraa province, at the Syrian-Jordanian border south of Damascus, Nov. 7, 2018 (AFP File Photo)
by Daily Sabah with DPA Aug 16, 2021 8:51 am
RECOMMENDED

Forces of the Bashar Assad regime and the opposition have agreed on a two-week truce in the south of the war-torn country after talks with the Russian army, a local official has stated.

For the past few weeks, regime forces have shelled and clashed with opposition fighters in the area of Daraa al-Balaad in the province of Daraa, the birthplace of the uprising that erupted against Assad's rule in 2011.

Since June 24, regime forces have imposed a siege on Daraa al-Balad.

The opposition surrendered the city of Daraa in 2018 after reaching an agreement with Russia and handed over their heavy weapons. Parts of the city, however, remained under the control of the opposition.

"Increased hostilities, which have included heavy shelling and intensified ground clashes, have resulted in civilian casualties. Thousands of civilians have been forced to flee Daraa al-Balad," Pederson said.

He warned that the situation there is alarming and that civilians are suffering from acute shortages of fuel, cooking gas, water and bread, as well as medical assistance.

The recent clashes come three years after Assad regime forces retook control of the flashpoint southern province of Daraa, trapping thousands of civilians in the crossfire.

Nearly half of the population of the opposition-held Daraa al-Balad district have fled heavy shelling and ground battles, but the United Nations warns that remaining civilians do not have access to already dwindling supplies.

Daraa, which borders Jordan and is close to the Israeli-occupied Golan Heights, is widely seen as the cradle of the 2011 uprising in Syria, which sparked a decadelong civil war that has killed almost half a million people.

In 2011, young boys who had scrawled graffiti against Syria's Assad were detained in Daraa, sparking nationwide protests.

After the demonstrations evolved into war, the opposition seized control. The opposition hung on until 2018. But after weeks of deadly fighting, the Russia-backed regime retook control under a surrender deal.

Moscow had brokered similar so-called "reconciliation" accords in Syria's second city of Aleppo, as well as the Eastern Ghouta region, outside the capital Damascus.

Under those deals, the opposition handed over their heavy weapons and left on buses. But in Daraa, many former opposition fighters stayed behind. While some did switch sides and join regime forces, others kept their guns and maintained control over several areas.

In the provincial capital, Daraa city, regime forces returned to the northern half, known as Daraa al-Mahatta. But the southern half, Daraa al-Balad, remained under opposition control.

Since the 2018 "reconciliation" deal, Daraa province has seen regular explosions and hit-and-run attacks.

During presidential elections in May – a vote widely criticized by Syria's opposition – protesters in Daraa al-Balad took to the streets demanding the "fall of the regime."

The election was held only in the two-thirds of Syria under regime control, and there were no ballot boxes in Daraa al-Balad.

After Assad celebrated winning his fourth term in power, he vowed to return all of Syria to state control. However, residents and activists believe the government wants "revenge."