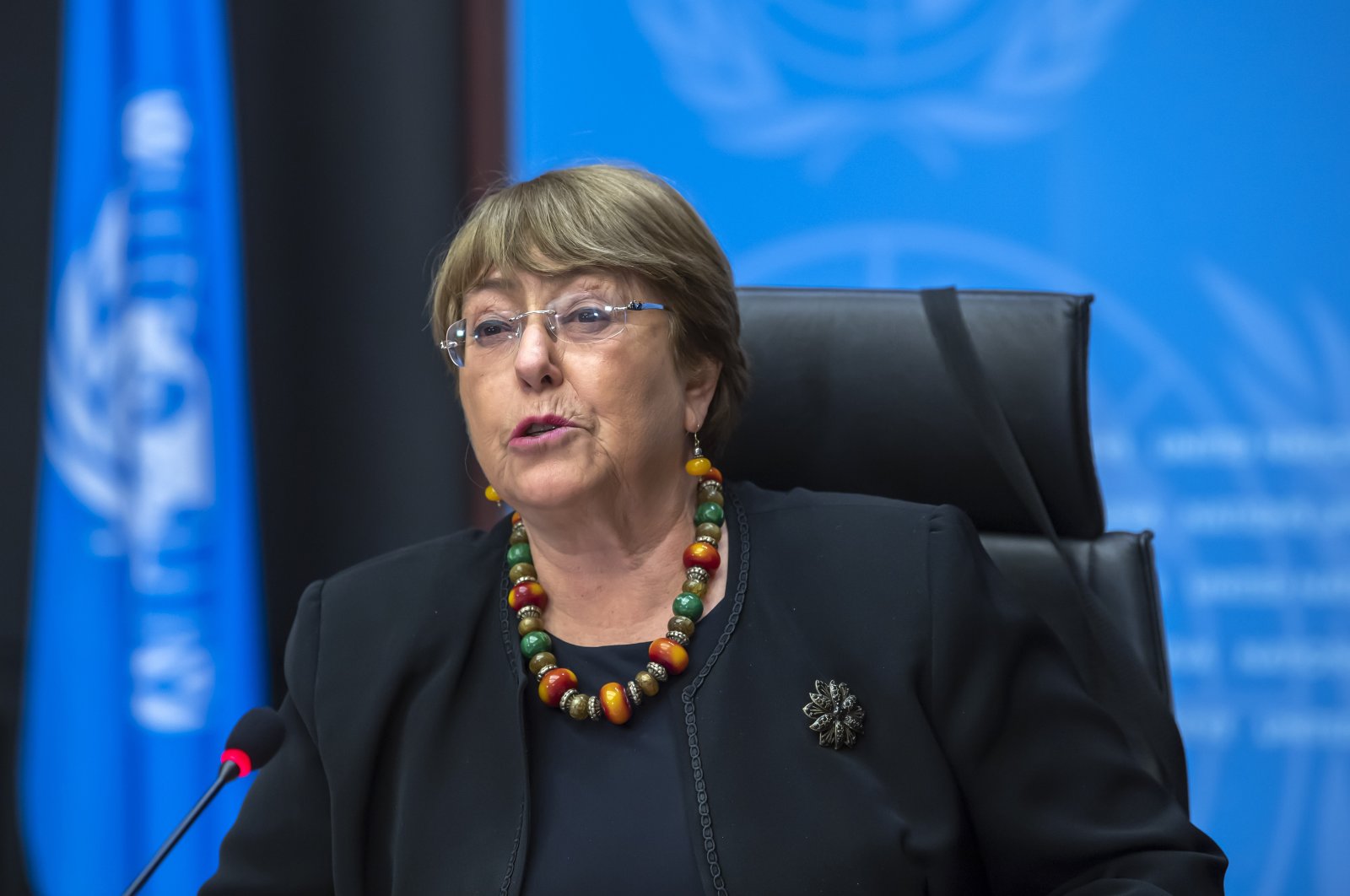 UN High Commissioner for Human Rights Michelle Bachelet speaks during a press conference at the European headquarters of the United Nations in Geneva, Switzerland, Dec. 9, 2020. (AP Photo)
by DAILY SABAH WITH AA Aug 06, 2021 11:38 am
RECOMMENDED

The United Nations human rights chief sounded the alarm Thursday for civilians in the southern Syrian city of Daraa that is experiencing intense fighting and indiscriminate shelling by the Bashar Assad regime forces and armed opposition groups.

U.N. High Commissioner for Human Rights Michelle Bachelet said the fighting is in and around Daraa, with the only route out strictly controlled by the Syrian regime.

"The stark picture emerging from Daraa al-Balad and other neighborhoods underscores how much at-risk civilians there are, repeatedly exposed to fighting and violence, and in effect under siege," said Bachelet.

"They are facing checkpoints, restrictions on their movements, tanks on the streets and their property is being seized and stolen," she said.

Hostilities between regime forces and armed groups escalated at the end of July, with shelling and artillery strikes hitting residential areas. It followed weeks of growing tension, during which the Assad regime imposed tighter controls on roads in and out of Daraa al-Balad, a former opposition stronghold, and other areas.

Bachelet's office said the aim was to pressure some members of armed groups to surrender, hand over their weapons and relocate to northern Syria, and the regime forces have strengthened their military positions in Daraa al-Balad, stationing tanks in residential areas.

In recent days, they have only been allowing pedestrians out of Daraa al-Balad along the al-Saraya road, imposing strict security checks.

Some 80% of Daraa's 50,000 civilians have now been displaced, according to local sources speaking to Anadolu Agency (AA). The sources highlighted that Syrian families trying to flee the conflict have to pay 2 million Syrian pounds (around $1,590) of bribes at regime checkpoints in order to be able to leave the city with their vehicles.

The families created long queues with their vehicles, taking beds, blankets and kitchen utensils with them.

It is the most severe confrontation since 2018, when regime forces established control over Daraa following various Russian-brokered reconciliation deals, said the U.N.

Last week, the U.N documented that reported ground-based strikes killed at least eight civilians by both Syrian regime forces and armed groups. Among those killed were five family members whose home was hit in the town of al-Yaduda in western rural Daraa. At least one mortar shell launched by unidentified armed individuals hit and damaged the Daraa National Hospital in Daraa al-Mahatta.

The U.N. rights office also said that it had confirmed that regime forces had seized and occupied several private homes in Shamal al-Khat, al-Panorama and al-Sabeel in Daraa al-Mahatta. They had expelled the occupants and are not allowing them to take any of their belongings, it added.

"These forces also stole money, mobile phones and laptops during searches of at least nine private houses on 30 and 31 July in Daraa al-Mahatta," said the rights office.

The escalation in hostilities has forced at least 18,000 civilians to flee Daraa al-Balad since July 28, many of them to the Daraa city and nearby. These include several hundred people sheltering in schools in Daraa al-Mahatta.

Bachelet reminded those involved in the conflict that international humanitarian law is clear regarding the protection of civilians. "Tanks in residential areas and a checkpoint set up in a house strongly suggest the necessary precautions are not being taken," the U.N. human rights chief stressed.

"There needs to be an immediate cease-fire to alleviate the suffering of civilians in Daraa," she said.

The European Union also called for the protection of civilians in the city. EU foreign policy chief, Josep Borrell, said in a statement that southwest Syria is seeing "the worst and deadliest violence" since 2018.

"Heavy shelling has killed dozens of civilians including women and children and 10,000 people have been displaced. The Daraa National Hospital, serving 50,000 people, was hit by mortars. There is a severe risk of escalation throughout Daraa province and beyond," it said.

It urged all parties to prioritize protecting residents of Daraa and ensure unhindered, safe and sustainable humanitarian access.

Most recently, the spokesperson for the Syria opposition forces in the area said that Turkey should act as a guarantor in Daraa. Muneef al-Zaim, the spokesperson for the opposition forces in Daraa, stated that Turkey should take over as guarantor in the area as Iran and Russia have been failing to fulfill their duties by protecting the Assad regime, the Türkiye daily reported Thursday.