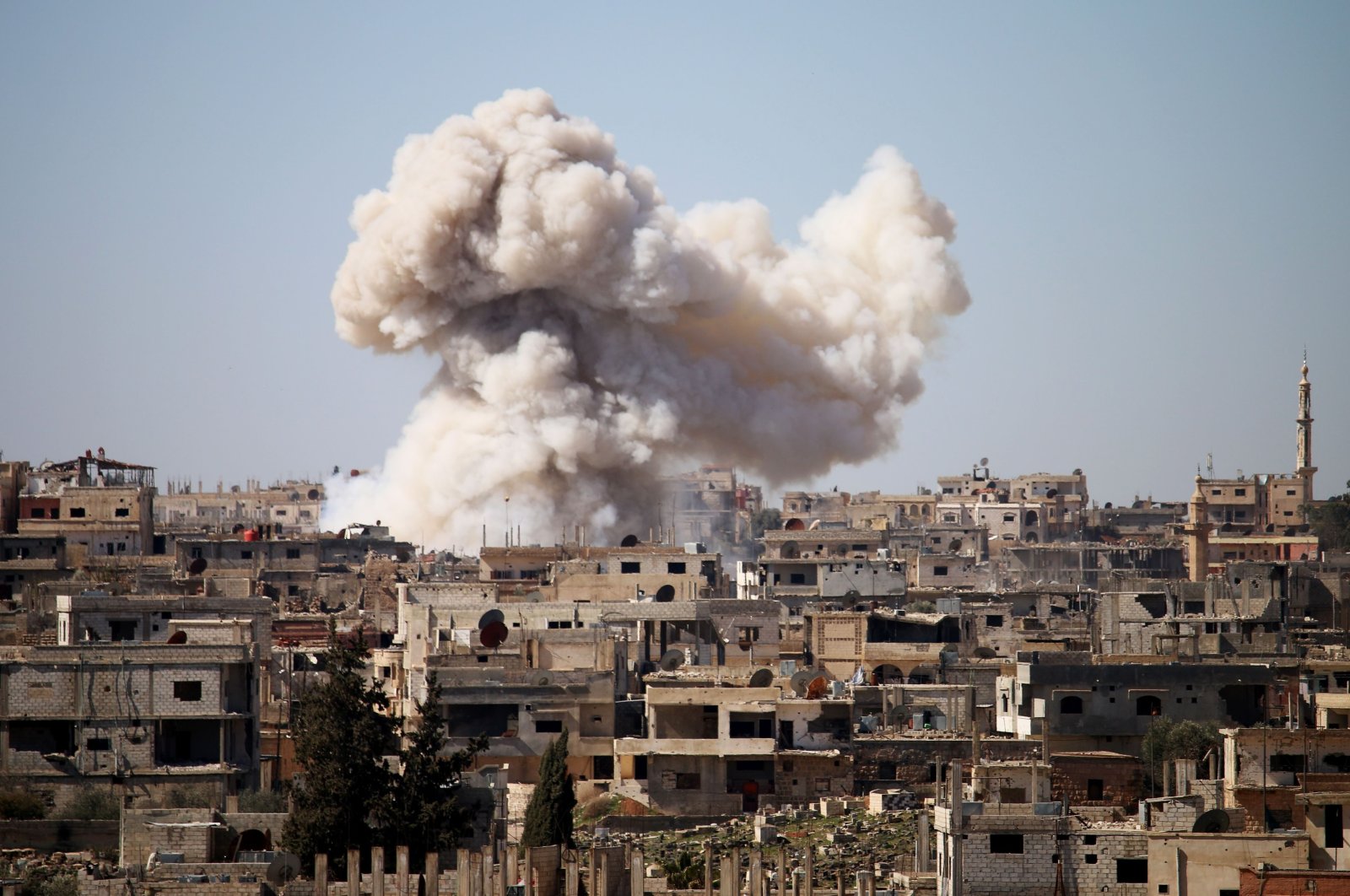 Smoke billows following a reported airstrike on an opposition position during clashes between opposition fighters and pro-regime forces to take control of an area in the southern city of Daraa, Syria, Feb. 20, 2017. (AFP File Photo)
by DAILY SABAH WITH AA
Aug 05, 2021 9:06 am

The European Union called for the protection of civilians in Syria's northwestern Daraa province where Assad regime forces have been carrying out attacks for over a week.

EU foreign policy chief Josep Borrell said in a statement that southwest Syria is seeing "the worst and deadliest violence" since 2018.

"Heavy shelling has killed dozens of civilians including women and children and 10,000 people have been displaced. The Daraa National Hospital, serving 50,000 people, was hit by mortars. There is a severe risk of escalation throughout Daraa province and beyond," it said.

It urged all parties to prioritize protecting residents of Daraa and ensure unhindered, safe and sustainable humanitarian access.

"The European Union joins United Nations Special Envoy for Syria, Geir Pedersen, in his call on all parties in Syria to adhere to the principle of protection of civilians and international humanitarian law and urges all parties to avoid escalation and restore calm," it added.

Underlining the need to step up the efforts to reach a peaceful political solution, it said the EU reiterates its support for the U.N. special envoy.

"Only a political process that respects the freedom and the dignity of all Syrian people in accordance with UNSC Resolution 2254 can bring about a lasting solution to the conflict," it added.

Blinken called "for an immediate end to the violence, which has killed civilians and displaced thousands suffering from shortages of food and medication."

"We reiterate calls for a nationwide ceasefire in line with UNSCR 2254," he wrote on Twitter.

Daraa, known as the birthplace of the Syrian revolution, is home to 40,000 people and was an opposition stronghold until 2018.

Assad forces and Iranian-backed militia launched a ground operation in the neighborhood on July 29, triggering clashes that spread across the countryside. Fifteen civilians have been killed.

A southern district of Daraa city, Daraa al-Balad, was blockaded by regime forces on June 25 after residents, including former members of the Syrian opposition, resisted an order to surrender their light weapons and allow regime forces to search houses in the area.

According to the Daraa-based Reconciliation Center and local figures, the order was opposed because it violated the terms of a 2018 deal, under which the area residents and former opposition members had to surrender all heavy weapons.

Tensions flared last week, leading to what the Syrian Observatory for Human Rights (SOHR) called the "most violent and broadest clashes in Daraa since it came under regime control."

Most recently, the Syrian opposition stated late Monday that stopping the regime’s attacks on Syria's southern province of Daraa is a humanitarian and legal duty after the regime's deadliest flareup in three years killed 28 people including 11 civilians.

Similarly, the White Helmets Syrian civil defense group called on the United Nations Security Council (UNSC) and the international community “to take urgent action to stop the Assad regime, Russia, and their militias from carrying out further attacks.”