Chemical weapons watchdog OPCW to decide on sanctions for Syria 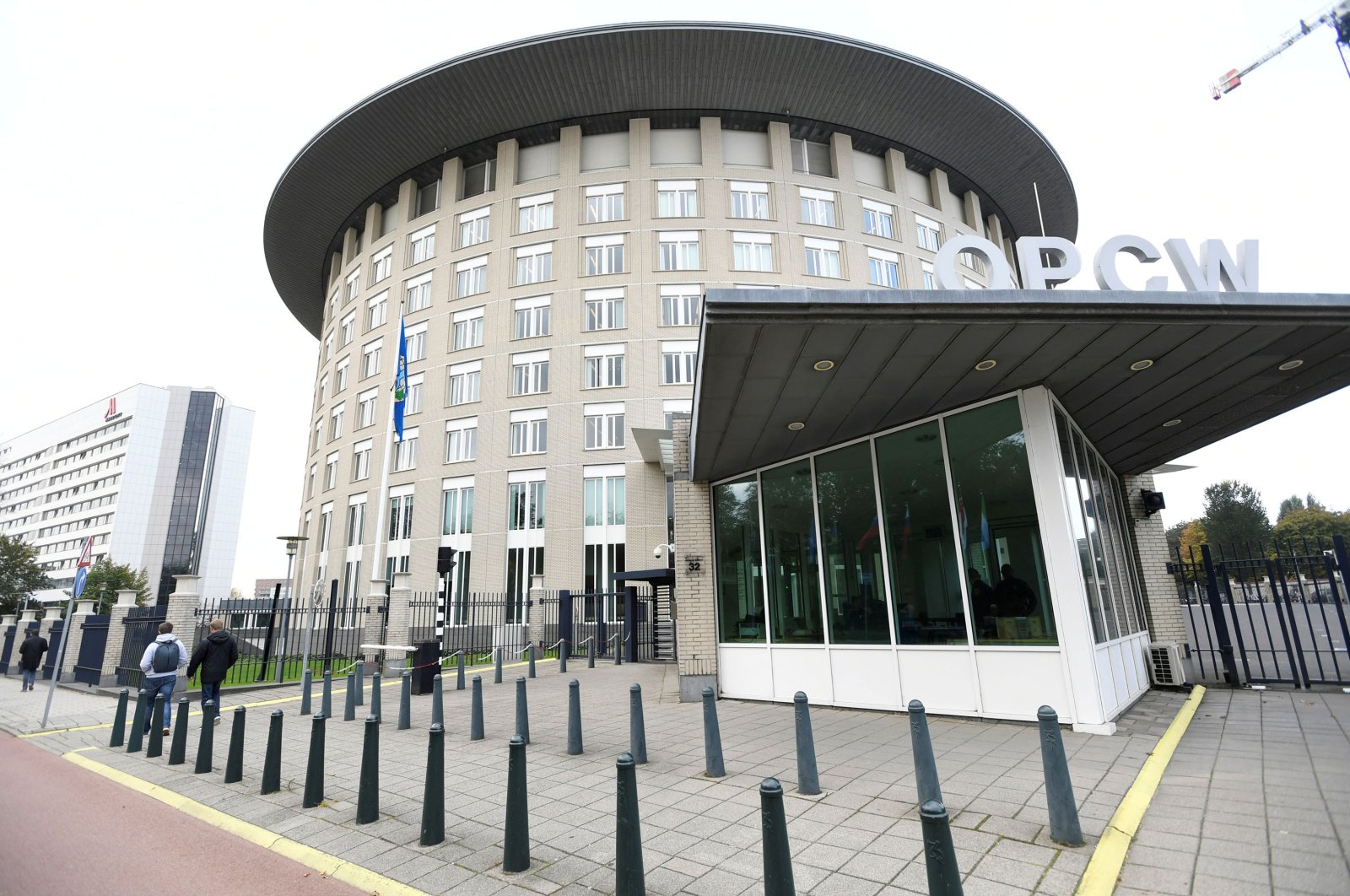 The headquarters of the Organization for the Prohibition of Chemical Weapons (OPCW) is pictured in The Hague, the Netherlands, Oct. 4, 2018. (REUTERS Photo)
by DAILY SABAH Apr 20, 2021 10:37 am
RECOMMENDED

The global chemical weapon watchdog will this week decide whether to impose sanctions on Syria after it confirmed that the Bashar Assad regime used chlorine gas in a 2018 attack on an opposition region.

Member states of the Organization for the Prohibition of Chemical Weapons (OPCW) will weigh a French proposal to suspend Syria's "rights and privileges" at the body, including its ability to vote.

Damascus is accused of failing to answer key questions after an OPCW probe last year found Syria attacked an opposition-held village with the nerve agent sarin and the toxic chemical chlorine in 2017.

"Syria's refusal to faithfully deliver the requested information cannot and must not remain unanswered," the European Union said in a joint statement to the United Nations last week.

"It is now up to the international community to take appropriate action."

If approved by the meeting of the OPCW's 193 member states at its headquarters in The Hague, it would be the first time the watchdog has used its maximum available punishment.

The three-day meeting opens Tuesday and diplomatic sources told Agence France-Presse (AFP) that the vote is expected Wednesday or Thursday.

Syria has rejected all the allegations and said the attacks were staged.

Damascus and its ally Moscow have accused Western powers of using the OPCW for a "politicized" campaign against them.

Syria agreed in 2013 to join the OPCW and give up all chemical weapons, following a suspected sarin attack that killed 1,400 people in the Damascus suburb of Ghouta.

But an OPCW investigation found in April last year that the Syrian air force was responsible for sarin and chlorine bombings on the village of Latamneh in 2017.

Damascus then failed to comply with a 90-day deadline by the OPCW's governing body to declare the weapons used in the attacks and reveal its remaining stocks.

France in response submitted a motion backed by 46 countries calling for the regulator to freeze Syria's rights at the watchdog.

Pressure mounted on Syria last week after a second investigation released by the OPCW found that it had also carried out a chlorine bomb attack on the opposition-held town of Saraqib in 2018.

World powers sparred at the U.N. last week over the issue.

"I say this with gravity, it is time for the Syrian regime to be held accountable," Nicolas de Riviere, the French Ambassador to the U.N., told the world body last week.

"I call on all states, parties to the Chemical Weapons Convention to support this draft decision."

Turkey also urged the world to hold Assad accountable for the Saraqib attack while the United States said that the attack came as no surprise.

According to the U.N., Damascus has not replied to a series of questions about its weapons installations for years, which could have been used to stock or produce chemical weapons.

The U.N. has also accused the Assad regime of carrying out chemical attacks against its own citizens in the past.

Russia and Syria have however criticized the OPCW's decision in 2018 to grant itself new powers to identify the perpetrators for attacks – as it did with the reports into the attacks in Latamneh and Saraqib.

Previously, the watchdog could only confirm whether or not chemical weapons were used, but not say by whom.

The OPCW has also been a backdrop for growing tensions between Russia and the West, with the Netherlands in 2018 expelling four alleged Russian spies whom it accused of trying to hack the watchdog's computers.

The organization won the Nobel Peace Prize in 2013 for its work in destroying the world's stocks of chemical weapons.