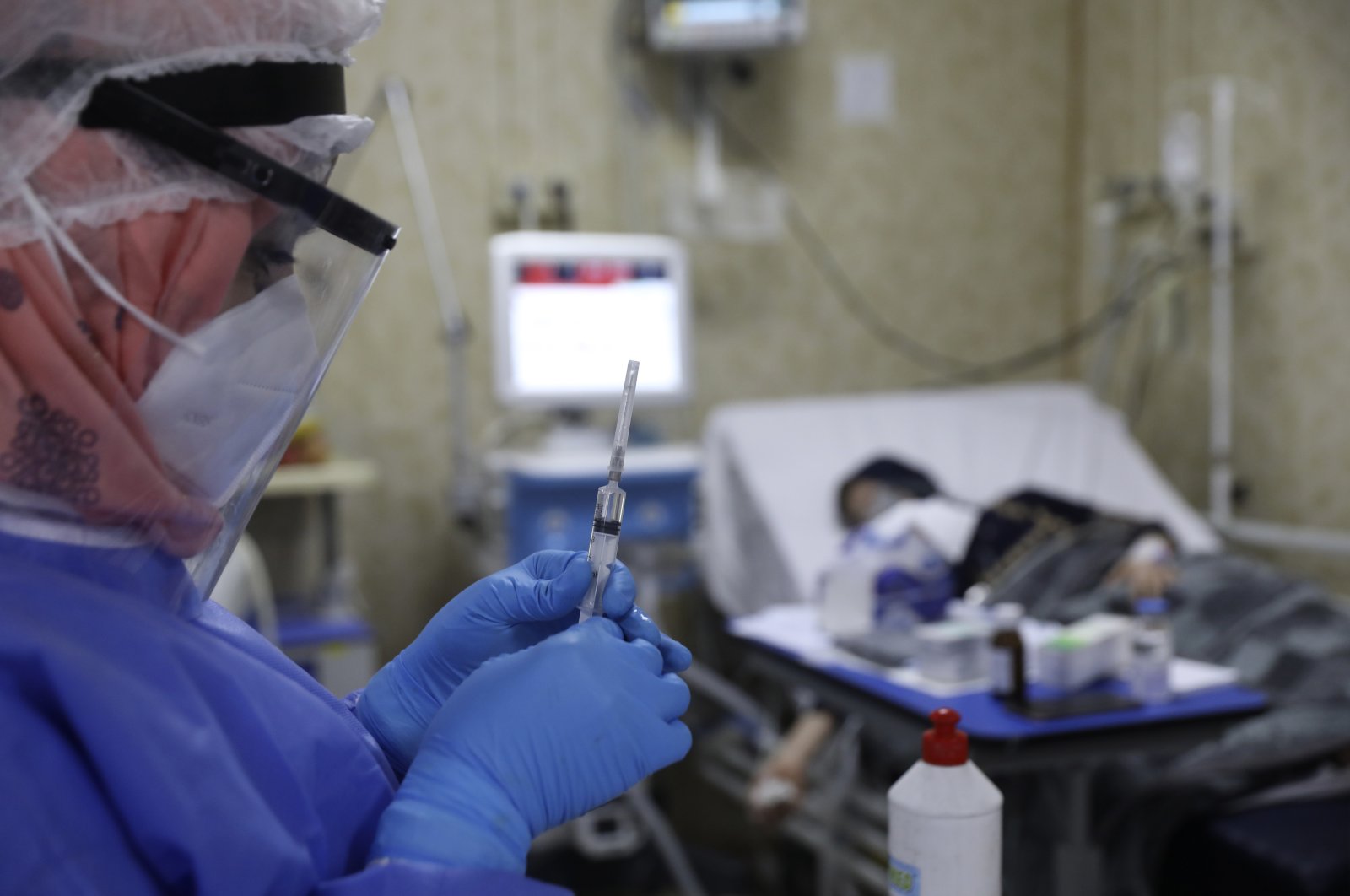 A nurse prepares a syringe for a patient infected with the coronavirus in the intensive care unit at the Syrian American Medical Society Hospital, in the city of Idlib, northwest Syria, Monday, Sept. 20, 2021. (AP Photo)
by Daily Sabah with AP Sep 22, 2021 9:42 am
RECOMMENDED

Ravaged by war, Syria’s last major opposition bastion, Idlib province, is struggling amid a sharp surge in COVID-19 cases and a lack of means to fight the pandemic.

The surge is a particularly devastating development in a region where scores of hospitals have been bombed and that doctors and nurses have fled in droves during a decade of war.

The total number of cases seen in the northwestern Idlib province – an overcrowded enclave with a population of 4 million, many of them internally displaced – has more than doubled since the beginning of August to more than 61,000. In recent weeks, daily new infections have repeatedly shot past 1,500, and authorities reported 34 deaths on Sunday alone – figures that are still believed to be undercounts because many infected people don’t report to authorities.

The situation has become so dire in the province that rescue workers known as the White Helmets who became famous for digging through the rubble of bombings to find victims now mostly ferry coronavirus patients to the hospital or the dead to burials.

"What is happening is a medical catastrophe,” the Idlib Doctors Syndicate said this week as it issued a plea for support from international aid groups.

Idlib faces all the challenges that places the world over have during the pandemic: Its intensive care units are largely full, there are severe shortages of oxygen and tests, and the vaccination rollout has been slow.

But extreme poverty and the ravages of Syria's civil war have made the situation in Idlib uniquely terrible. Half of its hospitals and health centers have been damaged by bombing, and the health system was close to collapse even before the pandemic. A large number of medical personnel have fled the country seeking safety and opportunities abroad. Tens of thousands of its residents live in crowded tent settlements, where social distancing and even regular hand-washing are all but impossible. And increasing violence in the region is now threatening to make matters worse.

For years, the Bashar Assad regime has ignored the needs and safety of the Syrian people, only eyeing further territorial gains and crushing the opposition. The regime has bombed civilian facilities such as schools, hospitals and residential areas, displacing almost half the country's population.

Cases and deaths have also been increasing in recent weeks in regime-held areas and those under the control of U.S.-backed terrorists in the east, but the situation appears to be worse in Idlib, though it's hard to measure the true toll anywhere.

Idlib has closed some markets, forced restaurants to serve outdoor meals only, and delayed the opening of schools by a week.

But most residents are daily laborers who could not survive if they stopped working, making full lockdowns impossible.

“If they don’t work, they cannot eat,” said Idlib resident Ahmad Said, who added that most people cannot even afford to buy masks.

What's more, a population that has suffered through so much already is often too weary to follow restrictions that have tested people even in easier circumstances.

“It is as if people have gotten used to death," said Salwa Abdul-Rahman, an opposition activist who reports on events in Idlib. "Those who were not killed by regime and Russian airstrikes are being killed now by coronavirus.”

The vaccination campaign meanwhile, has been slow, though the arrival of some 350,000 doses of a Chinese vaccine earlier this month could help. According to the World Health Organization (WHO), only about 2.5% of Idlib's population has received at least one shot.

The new virus outbreak also comes amid the most serious increase in violence in Idlib, 18 months after a truce reached between Turkey and Russia who support rival sides in Syria's conflict brought relative calm. In recent weeks, airstrikes and artillery shelling by government forces have left scores of people dead or wounded.

At al-Ziraa hospital, Dr. Muhammad Abdullah says there is no sign that the outbreak has reached its peak yet.

But for some Idlib residents, getting infected is the least of their worries.

“We have gone through more difficult situations than coronavirus,” said resident Ali Dalati, walking through a market without wearing a mask. “We are not afraid of coronavirus.”