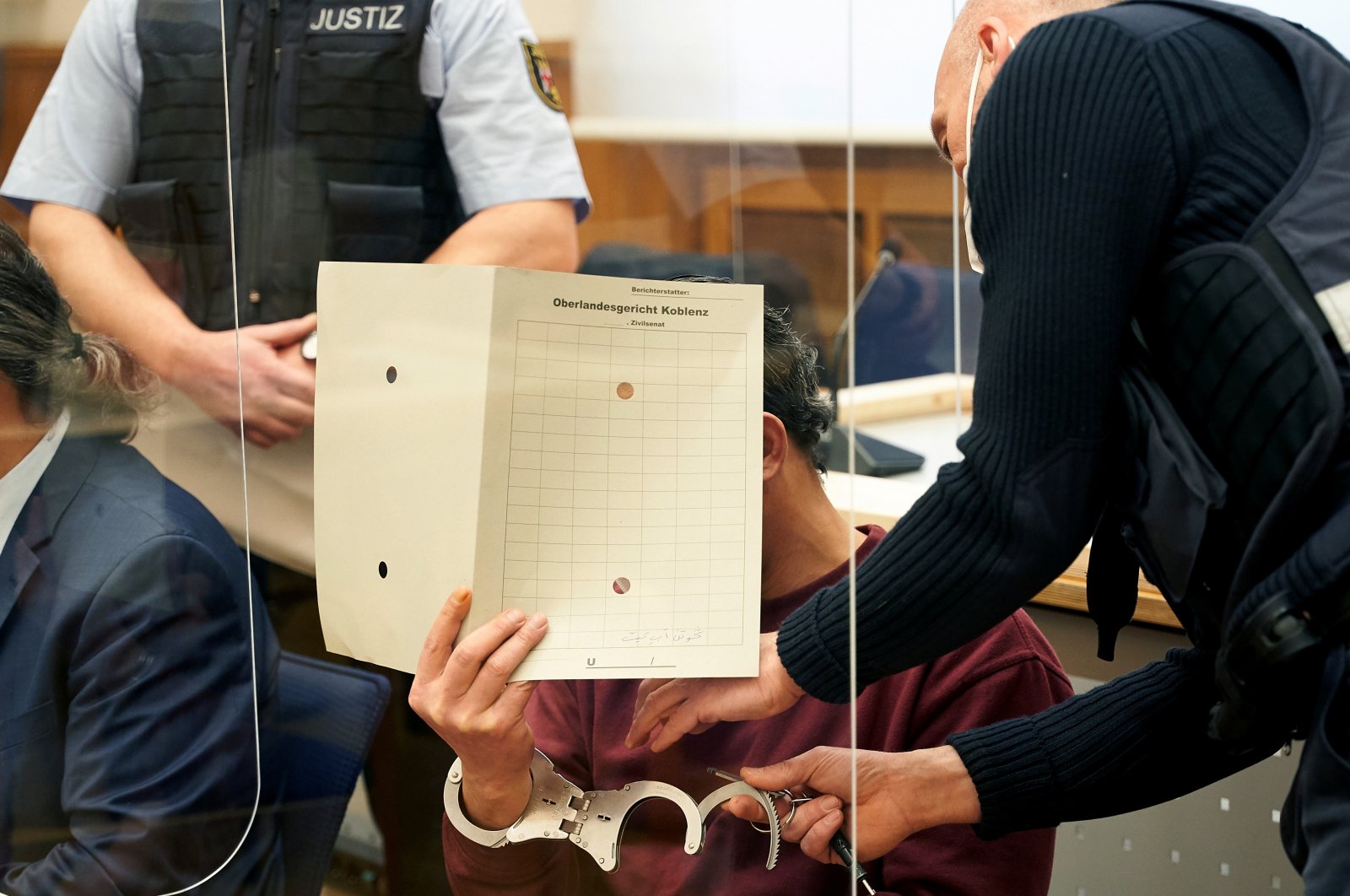 Staff removes handcuffs from Syrian defendant Eyad al-Gharib as he arrives to hear the verdict in the courtroom in Koblenz, Germany on Feb. 24, 2021. (Reuters Photo)
by DAILY SABAH WITH AGENCIES Feb 24, 2021 11:53 am
RECOMMENDED

A Syrian man has been sentenced to four and a half years in prison by a German court for his role in Syrian state torture, in the first verdict of its kind in the world.

Eyad al-Gharib, 44, was found guilty on Wednesday of acting as an accessory to crimes against humanity by the higher regional court in the city of Koblenz.

Almost 10 years since the Arab Spring reached Syria on March 15, 2011, the judgment is the first in the world related to the brutal repression of protesters by the regime in Damascus.

Gharib is accused of being an accomplice to crimes against humanity as a low-ranking member of the intelligence service.

The former colonel allegedly helped arrest at least 30 protesters and delivered them to the Al-Khatib detention center in Damascus after a rally in Duma, northeast of the capital, in the autumn of 2011.

Gharib is the first of two defendants on trial since April 23, 2020, to be sentenced by the court in Koblenz, after judges decided to split the proceedings in two.

The second defendant, Anwar Raslan, 58, is accused directly of crimes against humanity, including overseeing the murder of 58 people and the torture of 4,000 others.

Raslan's trial is expected to last until at least the end of October.

The two men are being tried on the principle of universal jurisdiction, which allows a foreign country to prosecute crimes against humanity, including war crimes and genocide, regardless of where they were committed.

Other cases of this kind have also sprung up in Germany, France and Sweden, as Syrians who have sought refuge in Europe turn to the only legal means currently available to them due to paralysis in the international justice system.

After spending time in Turkey and then Greece, Gharib arrived in Germany on April 25, 2018.

Germany has taken in more than a million asylum-seekers, with many fleeing wars in Syria and Iraq, and as a result, it can sometimes become a surreal arena where victims run into their erstwhile torturers on the street.

He has never denied his past, and in fact, it was his story that he told to German authorities in charge of his asylum application that eventually led to his arrest in February 2019.

Prosecutors accuse him of being a cog in the machine of a system where torture was practiced on an "almost industrial scale."

With attention focused mainly on Raslan during the 10 months of hearings, Gharib remained silent and hid his face from the cameras. He wrote a letter read out by his lawyers in which he expressed his sorrow for the victims.

And it was with tears streaming down his face that he listened to his lawyers call for his acquittal, arguing that he and his family could have been killed if he had not carried out the orders of the regime.

His defense also said he lived in fear of his superior Hafez Makhlouf, a cousin and close associate of Assad who was notorious for his brutality.

But Patrick Kroker, a lawyer representing the joint plaintiffs, argued that Gharib could have been more forthcoming during the trial, rather than keeping silent throughout the hearings.

People like him "can be very important in informing us about the (Syrian officials) we are really targeting, but it is something he chose not to do," said Kroker.

During the trial, more than a dozen Syrian men and women took the stand to testify about the appalling abuses they endured in the Al-Khatib detention center, also named "Branch 251."

Prosecutors said they had suffered rape and sexual abuse, "electric shocks," beatings with "fists, wires and whips" and "sleep deprivation" at the prison.

Some witnesses were heard anonymously, with their faces concealed or wearing wigs for fear of reprisals against their relatives still in Syria.

The trial also marked the first time that photos from the so-called Caesar files were presented in a court of law.

The 50,000 images taken by Syrian military police defector "Caesar" show the corpses of 6,786 Syrians who had been starved or tortured to death inside the Assad regime's detention centers.

They were scrutinized during the trial by forensic scientist Markus Rothschild, whose analysis constituted overwhelming material evidence.

The Syrian regime has been accused of various crimes during the decade-long conflict, including torture in prisons, summary executions and the use of chemical weapons.

Many victims, however, have preferred to remain silent, terrified of reprisals against friends and family members back in Syria, or of retribution from regime agents in Europe.

The monitoring group Syrian Observatory for Human Rights says at least 100,000 people have died from torture or harsh conditions in regime custody since the conflict began.

Already in 2012, Human Rights Watch said Syria was holding tens of thousands of detainees in a "torture archipelago." It documented 27 detention facilities nationwide used to hold people swept up in the government's crackdown on protesters.

One of the most devastating of such incidents was the Hama massacre which took place 39 years ago, on Feb. 2-28, 1982. According to one of the witnesses of the massacre, the incident was so horrifying that he still has trouble letting the memories of it go.

Speaking to Anadolu Agency (AA), 62-year-old Nacih Aziz has lost 20 of his relatives in the regime violence.

Aziz remembered that the regime forces gathering the men of the city together in the city center, killing them all, and then gathered their bodies together, making at least 40 piles of corpses all around the city.

The soldiers also burned down a mosque after killing the civilians who were praying inside.

"I also cannot forget the killing of two disabled women," Aziz recalled and expressed his sadness over the fact that none of the people who are responsible have faced any consequences or held accountable for what they had done.

"God saved us. I survived by escaping between the houses," he said.

During the Hama massacre, which took place under the pretext of easing the riot of the Muslim Brotherhood in the city, at least 30,000 civilians were killed, while 17,000 civilians went missing. Eighty-eight Mosques, three churches and many historical sites were also ruined during the incident.

The 1982 Hama massacre instilled such fear at the time that few Syrians were ready to challenge the Assad family rule openly until the 2011 uprisings.