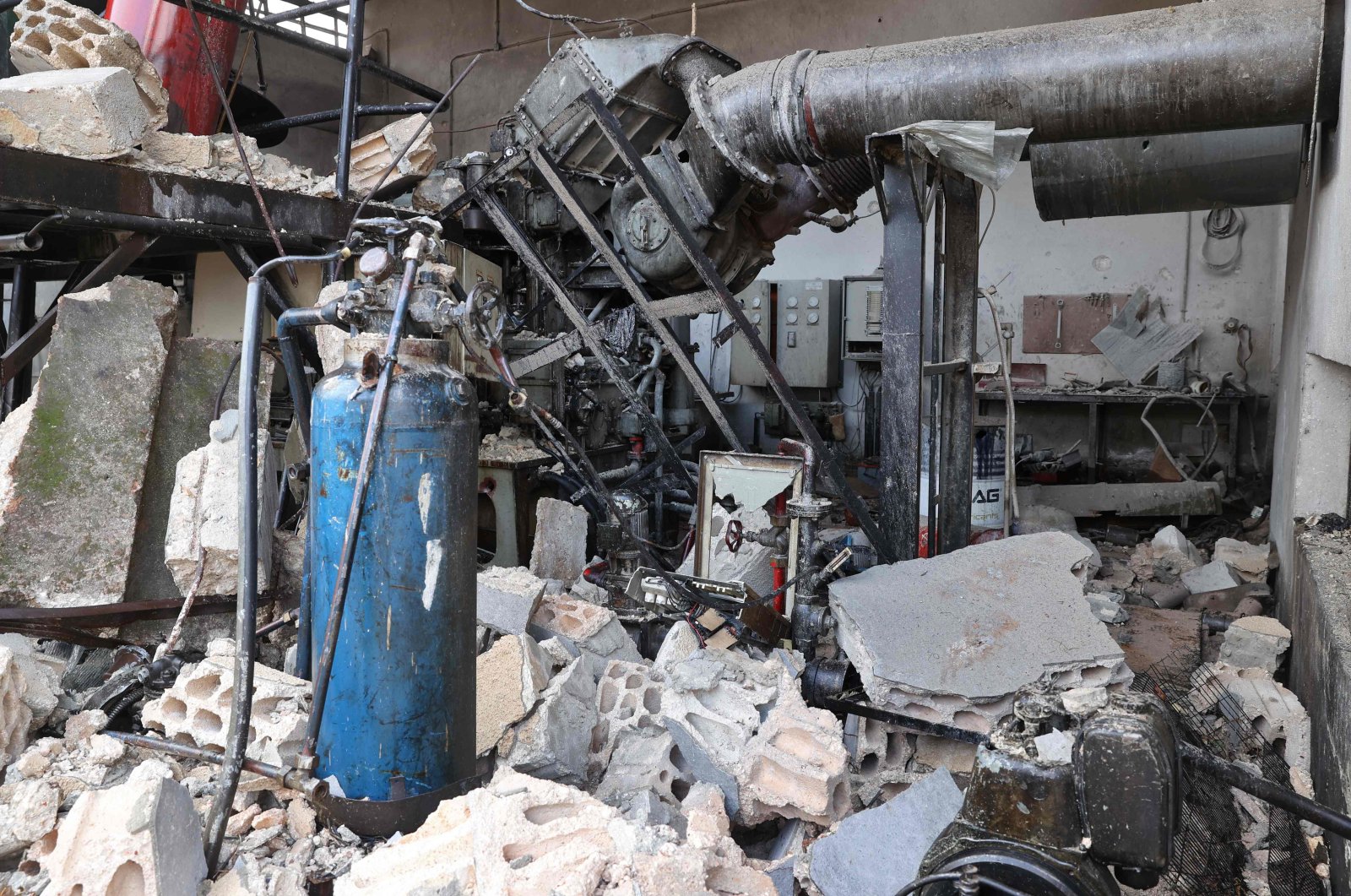 A picture shows damage at the Arshani water station, after it was reportedly hit by a Russian airstrike, in the village of the same name, northeast of the opposition-held city of Idlib, northwestern Syria, Jan. 2, 2022. (AFP Photo)
by DAILY SABAH WITH AGENCIES Jan 05, 2022 11:30 am
RECOMMENDED

The bombing of one of the main stations feeding the city of Idlib with running water in northwestern Syria by a Russian warplane left nearly 300,000 civilians without water.

According to the opposition aircraft observatory, the Arshani water distribution and pumping station was rendered unusual after Russia's Su-34 warplane on Jan. 2 bombed the facility located near Idlib's city center.

"Russia targeted one of the basic needs of civilians and left civilians without water," Diyben said.

Ibrahim Zeer, an Idlib resident, said that Russian warplanes have increased their attacks on infrastructure facilities.

Stressing how dangerous it is to target water facilities, Zeer said: "About 300,000-400,000 people will be deprived of water in Idlib. The people do not have the purchasing power anyway. The struggle for survival of civilians is growing day by day."

"Warplanes used to attack randomly. Now they are systematically targeting infrastructure. The world is watching what Russia is doing in Syria," he added.

Mohammad Halid, who also lives in Idlib, echoed the importance of the water pumping station damaged in the attack for the city's residents.

"It is very difficult to supply water with money on top of such an expensive cost. Buying water will be an extra burden for the people," he said.

Russian jets bombed areas near the northwestern Syrian city of Idlib on Sunday, marking a new year flare-up for the last opposition-held bastion.

Warplanes, said to be Russian Sukhoi jets by tracking centers, flew at high altitudes and dropped bombs on several towns and the main water pumping station serving the overcrowded city of Idlib, whose wider population is more than a million.

A senior United Nations official who confirmed the water station was "badly damaged" in an airstrike said such attacks worsened the humanitarian plight of millions of displaced Syrians.

"The Russians are focusing on infrastructure and economic assets. This is to add to the suffering of people," Abu Hazem Idlibi, an official in the opposition administration, said.

Two children were killed and five others were injured in northwest Syria due to violence that occurred in the first few days of the new year, according to a statement by UNICEF on Tuesday.

"Last year, more than 70% of grave violations against children in Syria were recorded in the northwest," the international organization said in a statement.

"Children and services catering to them must never come under attack," it said. "It has been 11 brutal years of war on the children of Syria. How much longer can this go on?"

The agency announced earlier this week that the water station, which it supports, came under attack in the Arshani village outside Idlib in northwestern Syria.

"The attack put the station out of service cutting water supply for over 241,000 people, many of whom are internally displaced," it added.

Other targets included villages in the Jabal al-Zawiya region in the southern part of Idlib province, with no immediate reports of casualties, residents and rescuers said.

A series of raids after midnight on Saturday hit makeshift camps that house thousands of displaced families near Jisr al Shughur, west of Idlib with two children and a woman were killed and 10 civilians wounded, the civil defense service said.

The White Helmets civil defense group announced on Sunday that a total of 225 civilians, including 65 children and 38 women were been killed by Russian and regime attacks in 2021.

There has been a relative lull in airstrikes since November after a renewed Russian-led campaign followed by Turkish army reinforcements inside the enclave raised the prospect of a wider resumption of violence.

A deal brokered nearly two years ago between Russia, which backs Bashar Assad's forces, and Turkey, which supports opposition groups, ended fighting that had displaced more than a million people within a few months.

Despite this, Idlib continues to suffer at the hands of the Bashar Assad regime and its backer Russia. Both are determined to recapture the last opposition stronghold and normalize political relations with regional countries, particularly within the scope of steps already taken with several Arab countries.