Streets of Syria's Daraa silent but tense after truce 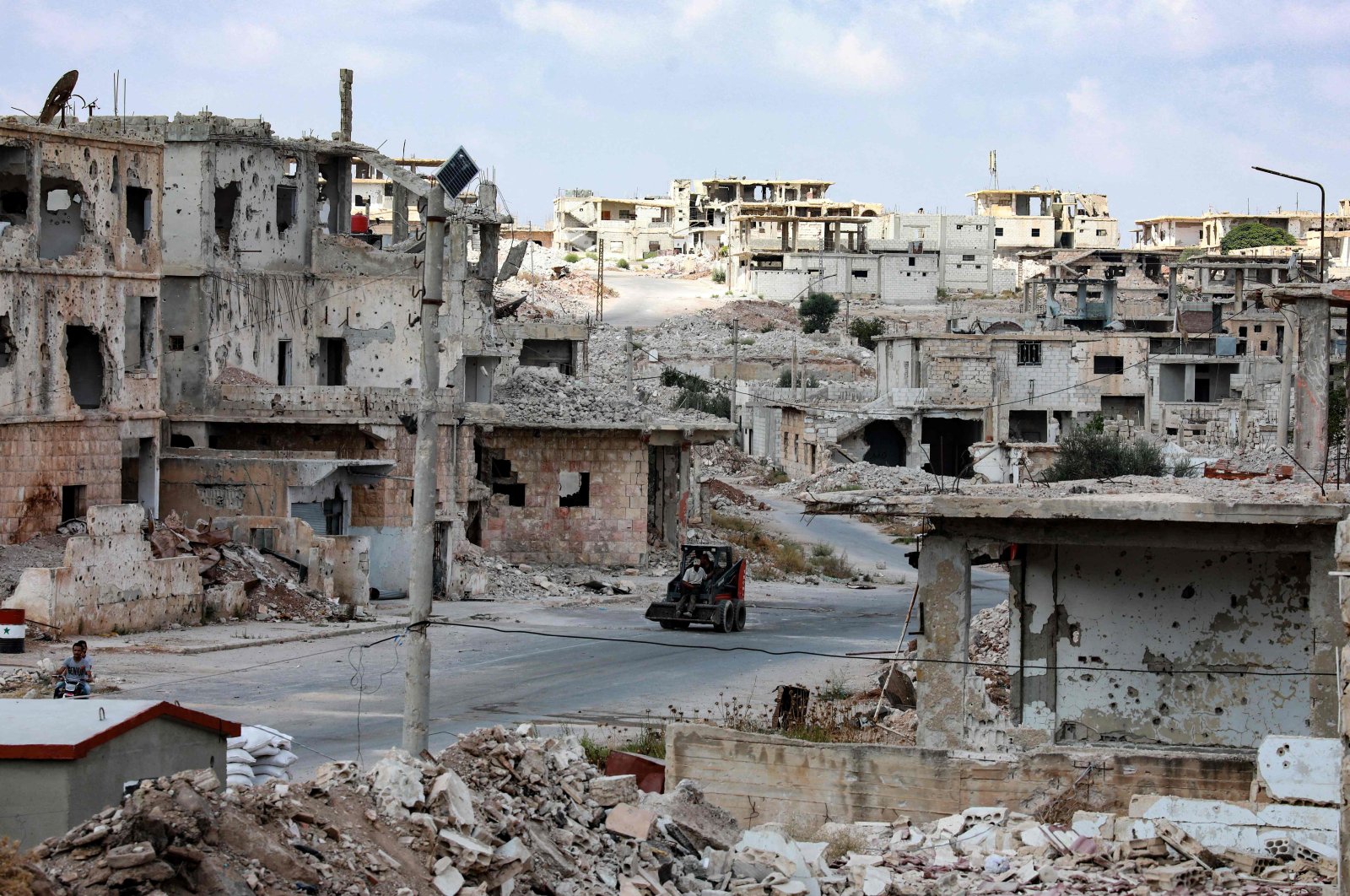 A picture taken during a tour organized by the Syrian Ministry of Information shows a bulldozer in the midst of destruction in the district of Daraa al-Balad of Syria's southern city of Daraa, on Sept. 12, 2021. (AFP Photo)
by French Press Agency - AFP Sep 12, 2021 5:57 pm

The badly damaged old town of the southern Syrian city of Daraa, which until recently was held by opposition forces, appears to slowly be returning to some sense of normalcy after weeks of clashes that raised concerns among the international community

The streets of Syria's southern city of Daraa have not yet returned to tranquility after the opposition-held half of the city was returned to state control under a deal for surrender, Agence France-Presse (AFP) reported.

Daraa province, which straddles the borders with Jordan and Israel, and its capital of the same name, the cradle of Syria's uprising, returned to government control in 2018 under a previous cease-fire backed by regime ally Russia.

The capture of Daraa al-Balad marked another victory for Bashar Assad, whose forces now control much of the country 10 years after Syria's civil war began.

But the opposition stayed on in a southern part of the city called Daraa al-Balad, and over the summer they clashed with regime forces on its outskirts seeking to retake the area.

A new Moscow-brokered truce has seen dozens of opposition fighters bused out of the city over the past few weeks and government forces return to the area since Wednesday.

The guns had fallen silent but the areas visited were largely devoid of civilians, and the few who sped by on motorbikes refused to speak to the media.

"Nine checkpoints have been set up on the edges of and inside Daraa al-Balad," a military source told AFP.

Under the deal, fighters who agree to the truce have been invited to give up their guns and sign up to stay in the city under a so-called reconciliation process.

"The process is ongoing to settle the status of those fighters who wish to do so after handing over their weapon," the source said.

"There is cautious calm and we are waiting for the reconciliation steps to be completed," the source added, expressing the hope that everyone would accept the deal.

"The state would prefer not to have to resort to a military solution."

The United Nations and rights group Amnesty International have warned of dwindling supplies inside Daraa al-Balad in recent weeks, after government forces tightened the noose around the area.

"We are closely monitoring the developments in Daraa with concern," Foreign Ministry spokesperson Tanju Bilgiç said in a written statement.

Citing the Assad regime's intense attacks targeting civilians there, Bilgiç said it is "unacceptable" that the Daraa al-Balad neighborhood and its surroundings are besieged and civilians are forced to flee.

He also dismissed claims that Turkey had agreed to and would accept civilians coming from Syria during mediation attempts between the Assad regime and opposition groups.

Turkey expects the cease-fire agreement that went into effect on Sept. 6 to be "permanent" this time and the inhumane treatment of the people of Daraa to end, Bilgiç added.

But a source with the provincial authorities told AFP that two bakeries had reopened and work was underway to set up several medical treatments posts.

The fighting since July caused more than 38,000 people to flee the southern half of the city, the U.N. has said.

One person walking through Daraa al-Balad was Ahmed Kiwan, 45, who came to the area to buy scrap metal from residents. “We are now able to work freely,” Kiwan, who is from the nearby village of Tafas, told AP.

Another resident, Abu Wael had decided to stay with his family in the district despite the fighting. He said luckily his home was not destroyed.

“I hope that we will live safely and we have returned to our normal life,” he said as he worked to get his car repair shop ready for business in the coming days.

Assad's forces have recaptured about 70% of the country since 2015 and large-scale fighting has subsided in the multi-sided conflict that has killed hundreds of thousands of people, driven millions from their homes, sucked in neighbors and world powers, and caused the largest displacement crisis since World War II.