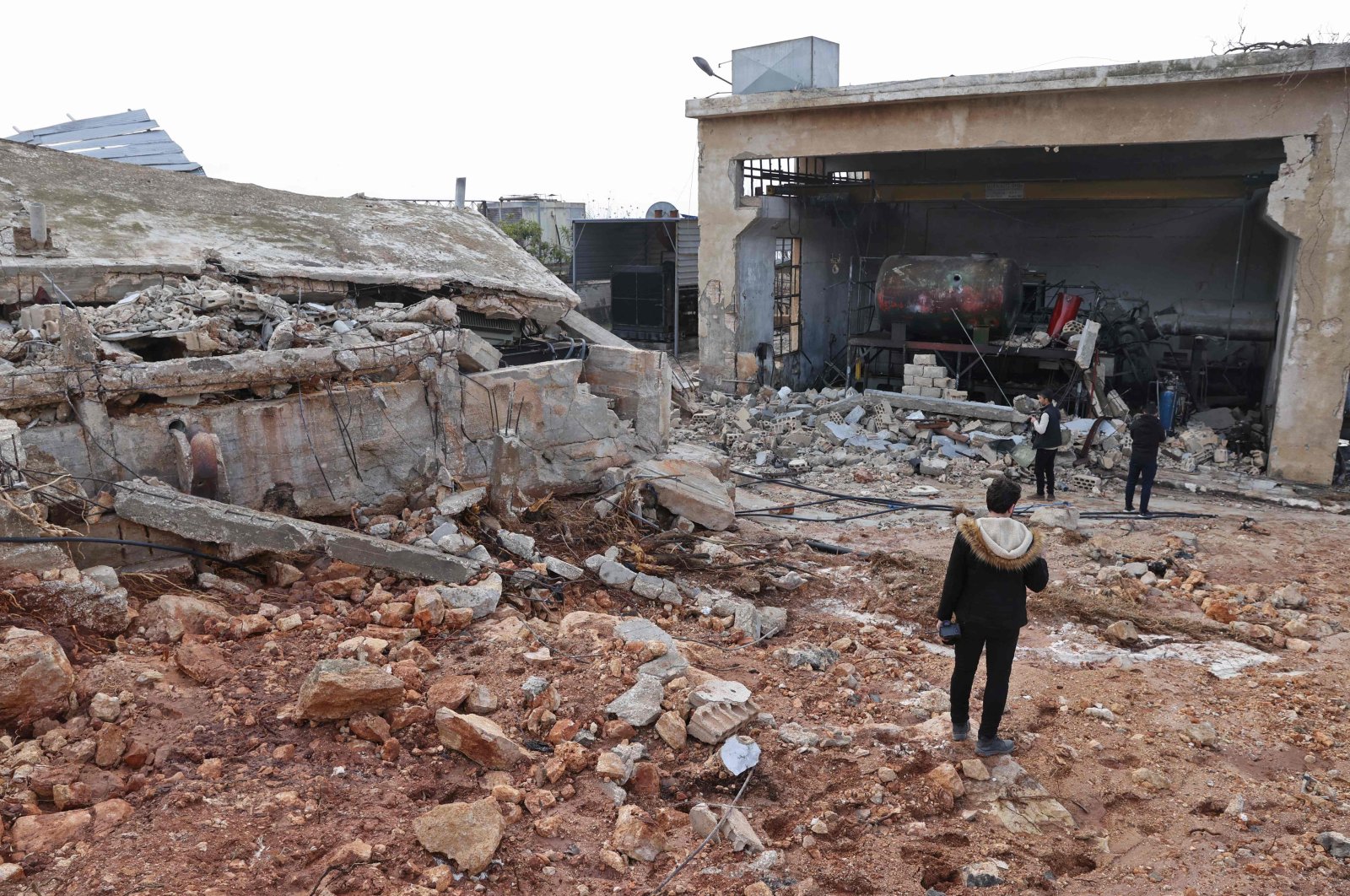 People assess the damage at the al-Arshani water station, after it was reportedly hit by a Russian airstrike, in northwestern Idlib, Syria, Jan. 2, 2022. (AFP Photo)
by DAILY SABAH Jan 10, 2022 9:18 am

The first week of 2022 proved deadly for Syrians living in the northwest region of Aleppo as Russia and the regime carried out attacks killing at least two children. Their suffering is compounded by the presence of terrorist organizations in the region, mainly the U.S.-backed YPG

It said that missiles fired from the YPG and regime-controlled areas hit Alhmadia village and the outskirts of Dweibeq village.

Civilians in Syria’s northwest and north continue to suffer at the hands of the Bashar Assad regime and terrorist organizations.

Locals living in areas held by the YPG have long suffered from its atrocities, as the terrorist organization has a notorious record of human rights abuses, ranging from kidnappings, recruitment of child soldiers, torture, ethnic cleansing and forced displacement.

On the other hand, Turkey strongly opposed the terrorist group’s presence in northern Syria, a major sticking point in strained Turkey-United States relations. Ankara has long objected to the U.S.' support for the YPG, a group that poses a threat to Turkey and terrorizes locals, destroying their homes and forcing them to flee.

Since its foundation, the PKK has forcibly taken at least one child from a family who failed to "pay taxes" in support of the group. The PKK has continuously raided villages and kidnapped young adults aged between 15 to 20 using violent means to fill its ranks.

According to the White Helmets, during the first week of 2022, two children and a woman were killed while 17 others were injured, eight of them children, after Russian forces conducted 32 air raids on northwestern Syria.

Although Russia and the regime forces stated that they targeted the armed militant groups that controlled the region in their airstrikes and did not carry out attacks against civilians, what happened in the last week proves the opposite.

"The Russians are focusing on infrastructure and economic facilities, which adds to the suffering of the people," officials in Idlib said, Sabah daily reported.

A senior United Nations official who confirmed that the water station was "badly damaged" in an airstrike said such attacks worsened the humanitarian plight of millions of displaced Syrians.

Russia has remained silent as the Syrian regime constantly accused Turkey of black propaganda over the water and electricity cuts in the region. It criticized Turkey for the interruptions in the region and expressed this issue in meetings at the general level.

While the electricity used in the pumping of the water going to the Hassakeh region from the Allouk Water Facility comes from the dams under the regime's control, the YPG/PKK terrorist organization and the regime forces punish the people of the region through regular power outages. Nevertheless, despite all the adversities, Turkey brought generators and started the pumps so that the people of Hassakeh would not be without water.

The bombing of one of the main stations providing the city of Idlib with running water in northwestern Syria by a Russian warplane left nearly 300,000 civilians without water.

According to the opposition aircraft observatory, the Arshani water distribution and pumping station was rendered unusable after Russian Su-34 warplanes bombed the facility located near Idlib's city center on Jan. 2.

Russian jets dropped bombs on areas near the northwestern Syrian city of Idlib on Sunday, marking a new year flare-up for the last opposition-held bastion.

Warplanes, said to be Russian Sukhoi jets by tracking centers, flew at high altitudes and dropped bombs on several towns and the main water pumping station serving the overcrowded city of Idlib, whose wider population is more than a million.

There has been a relative lull in airstrikes since November after a renewed Russian-led campaign followed by Turkish army reinforcements inside the enclave raised the prospect of a wider resumption of violence.

A deal brokered nearly two years ago between Russia, which backs Bashar Assad's forces, and Turkey, which supports opposition groups, ended fighting that had displaced more than a million people within a few months.

Despite this, Idlib continues to suffer at the hands of the Assad regime and its backer Russia. Both are determined to recapture the last opposition stronghold and normalize political relations with regional countries, particularly within the scope of steps already taken with several Arab countries.