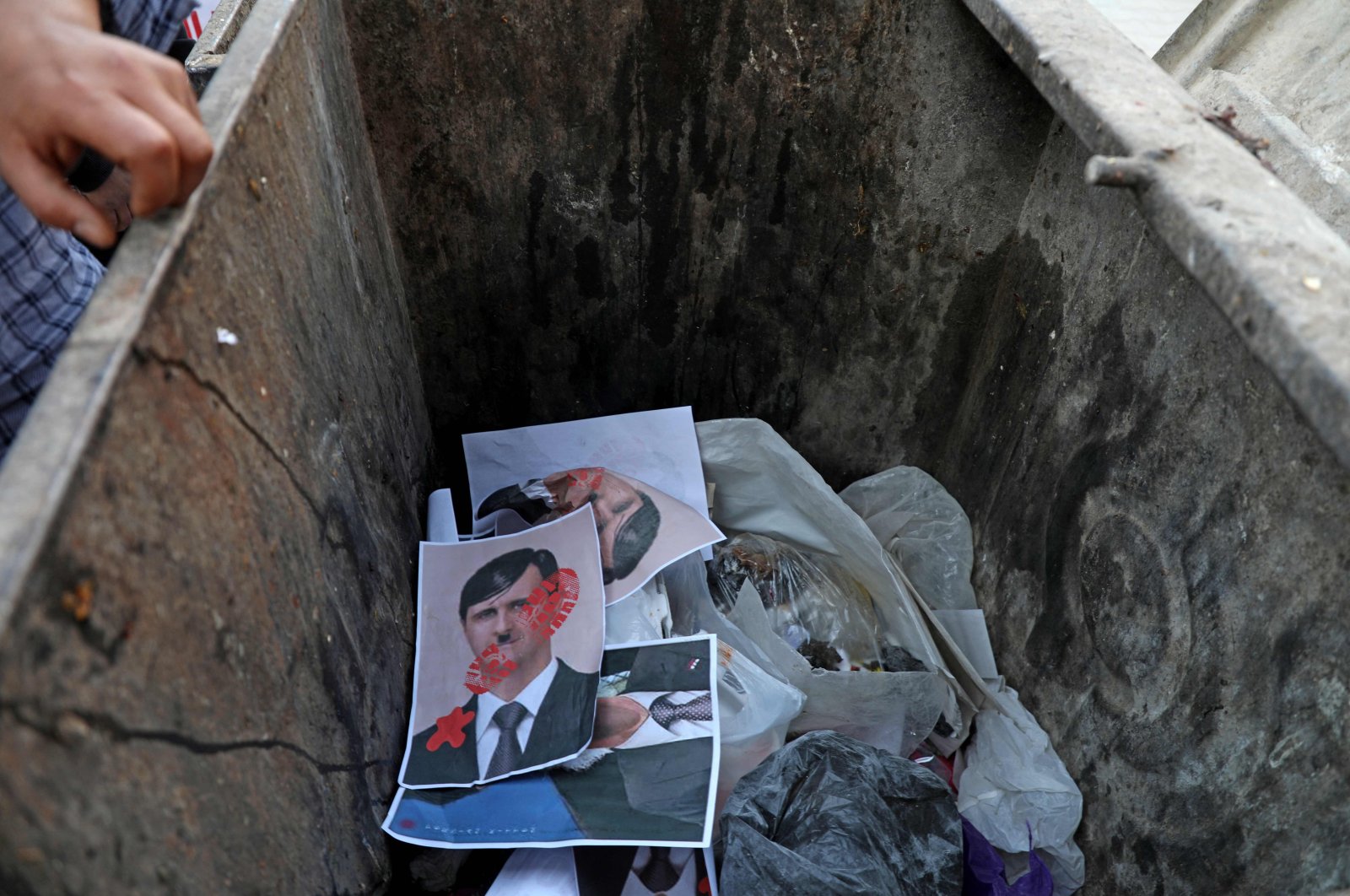 Syrians throw posters depicting Bashar Assad as Adolf Hitler in a garbage bin symbolizing a ballot box in the town of Dana, east of the Turkish-Syrian border in Idlib province, northwestern Syria, May 24, 2021. (AFP Photo)
by Daily Sabah with AFP
Jun 01, 2021 11:10 am

The Syrian conflict that erupted in 2011 has claimed the lives of nearly half a million people, the Britain-based Syrian Observatory for Human Rights (SOHR) stated Tuesday in a new toll that includes 100,000 recently confirmed deaths.

The observatory said the war has claimed 494,438 lives since 2011 with the brutal repression of anti-regime protests.

The previous tally, issued by the observatory in March this year, stood at more than 388,000.

The war monitor has since confirmed an additional 105,015 deaths following months of documentation efforts supported by its network of sources on the ground.

"The overwhelming majority of these deaths occurred between the end of 2012 and November 2015," observatory head Rami Abdel Rahman told Agence France-Presse (AFP), referring to the latest additions.

Of the recently confirmed fatalities, more than 42,000 are civilians, most of them killed under torture in Syrian regime prisons, according to the monitor.

Abdel Rahman said that a lull in the fighting allowed his organization to investigate reports of deaths that had not been included in the overall tally due to lack of documentation.

"It provided us with a window to document tens of thousands of cases for which we lacked evidence," he said.

With regime forces having reconquered large swathes of Syria and a cease-fire still holding along the main front line in the Idlib region in the northwest, violence levels are at their lowest since the start of the conflict.

The new figures published by the observatory bring the total civilian death toll to 159,774, with attacks by Syrian regime forces and allied militia accounting for the majority of deaths.

The observatory also documented a total of at least 57,567 deaths in regime prisons and detention centers since 2011, up from the 16,000 confirmed deaths it reported in March.

It also reported 168,326 deaths among Syrian soldiers and allied militia, with troops accounting for more than half of the tally.

The conflict has killed 68,393 terrorists, mostly members of Daesh or of organizations linked to al-Qaida, as well as 79,844 other rebels.

Most recently, a fragile truce was brokered between Moscow and Ankara in March 2020 in response to months of fighting by the Russia-backed regime. Almost a million people have fled the Assad regime’s offensive, yet the regime still frequently carries out attacks on civilians, hindering most from returning to their homes and forcing them to stay in makeshift camps.

The attention on both sides has since turned to battling the COVID-19 pandemic and 2020 saw the lowest number of conflict-related deaths since the start of the war with 10,000, according to the observatory.

Today the Damascus regime controls more than two-thirds of the country after a string of Russia-backed victories since 2015.

Bashar Assad, in power since 2000, was reelected in May for a fourth seven-year term.

The war has forced more than half the country's pre-war population to flee their homes.