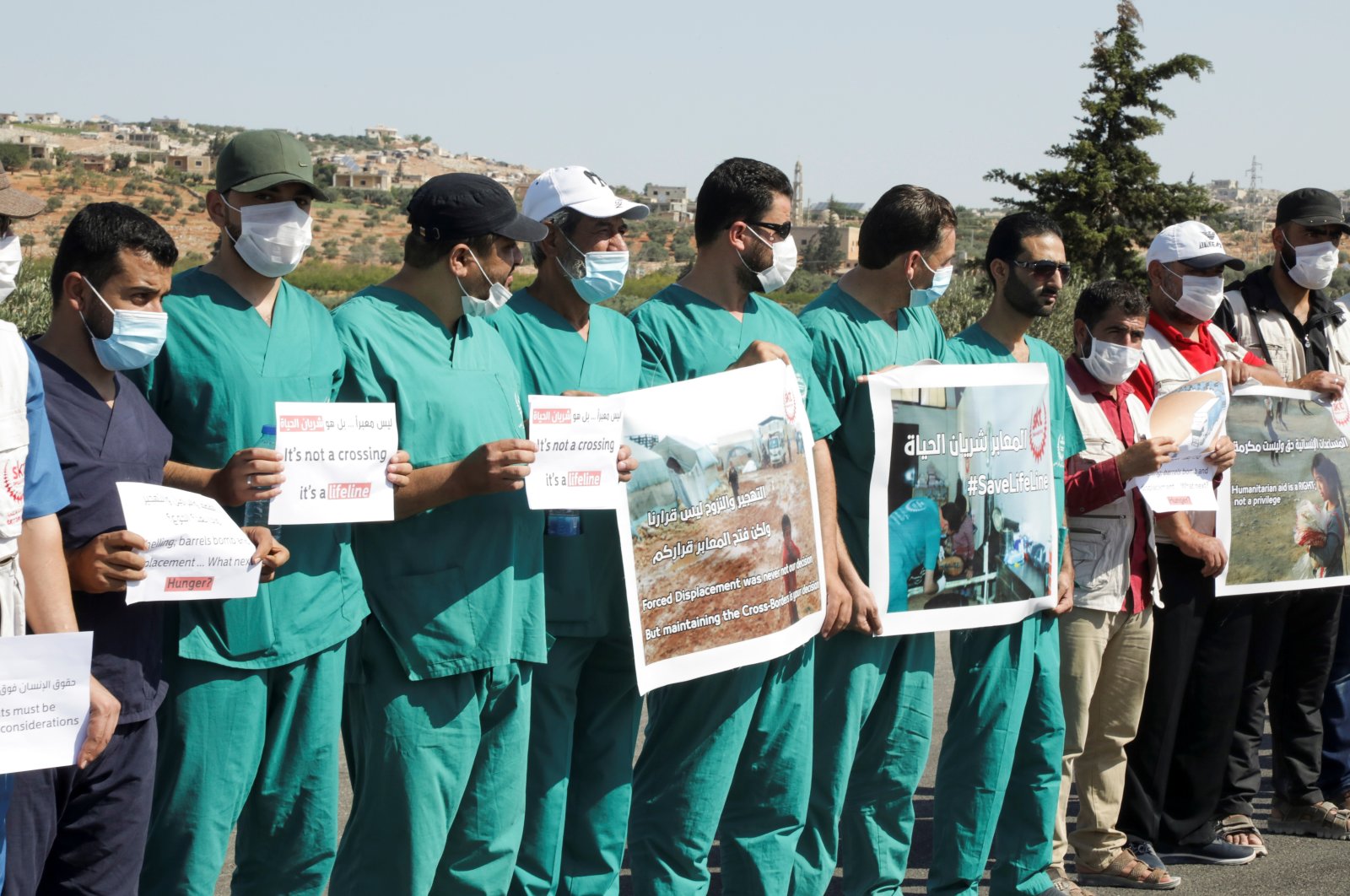 Health care workers hold signs near the Bab al-Hawa crossing during a sit-in against its closure, at the Syrian-Turkish border, in Idlib governorate, Syria, July 2, 2021. (Reuters Photo)
by Daily Sabah with Reuters Jul 08, 2021 9:51 am
RECOMMENDED

Syrians that fled the rule of the Bashar Assad regime and took shelter in the northwestern areas fear their fate may once again be placed in the regime’s hands as the last border-crossing for humanitarian aid is at risk of being shut.

Russia, Assad's key ally, wants United Nations aid to the region to come through the capital Damascus and not via Turkey, raising fears that the food they rely on will fall under their oppressor's control.

A U.N. mandate to supply aid from Turkey, currently via the Bab al-Hawa crossing, expires Saturday, and while Western members of the U.N. Security Council want to extend and expand it, veto powers Russia and China are wary of renewing it. Russia skipped negotiations on the issue Tuesday.

Hossam Kaheil, who fled to Idlib in 2018 when the rebellion in Ghouta, just outside Damascus, was defeated, does not trust regime authorities to let aid through if supply lines are changed.

"In Idlib the situation is good, but if they close the crossings, there will be a humanitarian catastrophe," said the 36-year-old, who recalls being so hungry in 2014, as Syrian regime forces laid siege to Ghouta, that he had to eat animal feed. He added that two of his siblings died due to medical shortages during the siege, described by U.N. investigators as the longest in modern history.

U.N. aid across the Turkish border has helped to keep millions of Syrians supplied with food, medicine and water in the last part of Syria still held by the opposition.

The regime says it is committed to facilitating the delivery of U.N. aid from within the country. The Syrian information ministry did not respond to emailed questions from Reuters for this article.

Russian President Vladimir Putin said last month that the Red Cross and Red Crescent should be allowed to observe if there were suspicions of any stealing, although he did not think that would happen.

The tussle marks a diplomatic front in a war that has been in a military stalemate for several years, with Moscow and Damascus seeking to reassert state sovereignty over a corner of Syria outside their control.

Since winning back the bulk of Syria with Russian and Iranian help, Assad has struggled to advance further. Turkish forces block his path in the northwest, and United States forces are on the ground in the east, where oilfields, farmland and land routes to Iraq are located.

Regime-held Syria, along with the rest of the country, is in economic crisis. Assad's plans for reconstruction and economic revival, which came to little, faced new headwinds with the imposition of new U.S. sanctions last year.

"This is a moment of leverage for Russia – a wrangle over strategic advantage in which humanitarian issues are being used as the fulcrum," Joshua Landis, head of the Center for Middle East Studies at the University of Oklahoma, told Reuters.

"Unfortunately the Syrian people are the real losers in this battle between Russia and the U.S."

The U.S. wants the aid mandate renewed. So does Turkey, which exercises sway in the northwest through support to the opposition, aid and Turkish boots on the ground.

The U.N. has warned that failure to renew the aid operation would be devastating for millions of people.

"It is really shameful that we are talking about reducing access at a time when we should be scaling up the operation," he added.

The number of people dependent on aid in the northwest has grown by 20% to 3.4 million in a year, the U.N. says.

Russia cites U.S. sanctions as a reason for the humanitarian problems. Washington, whose sanctions aim to cut off funds for the Assad regime, rejects this.

Agreed in 2014 when Assad was in retreat, the U.N. mandate initially allowed deliveries from four locations. Russian and Chinese opposition whittled this down to one last year. Russia says the operation is outdated.

Delivering aid across front lines has proven difficult if not impossible throughout the war. "We've requested access for cross-line convoys multiple times ... because we would like as much access as possible from all sides, but the war is not over," Cutts said.

"In this kind of environment, it is very difficult to get agreement from the parties on both sides for convoys to move across that front line," he added.

Durmuş Aydın, secretary-general of Turkey's Humanitarian Relief Foundation (IHH), part of the aid operation, told Reuters that aid deliveries across front lines did not seem possible at the moment.

"One of the reasons this isn't a realistic solution is the mistrust in people toward the Syrian (regime) government and Russia," he said.