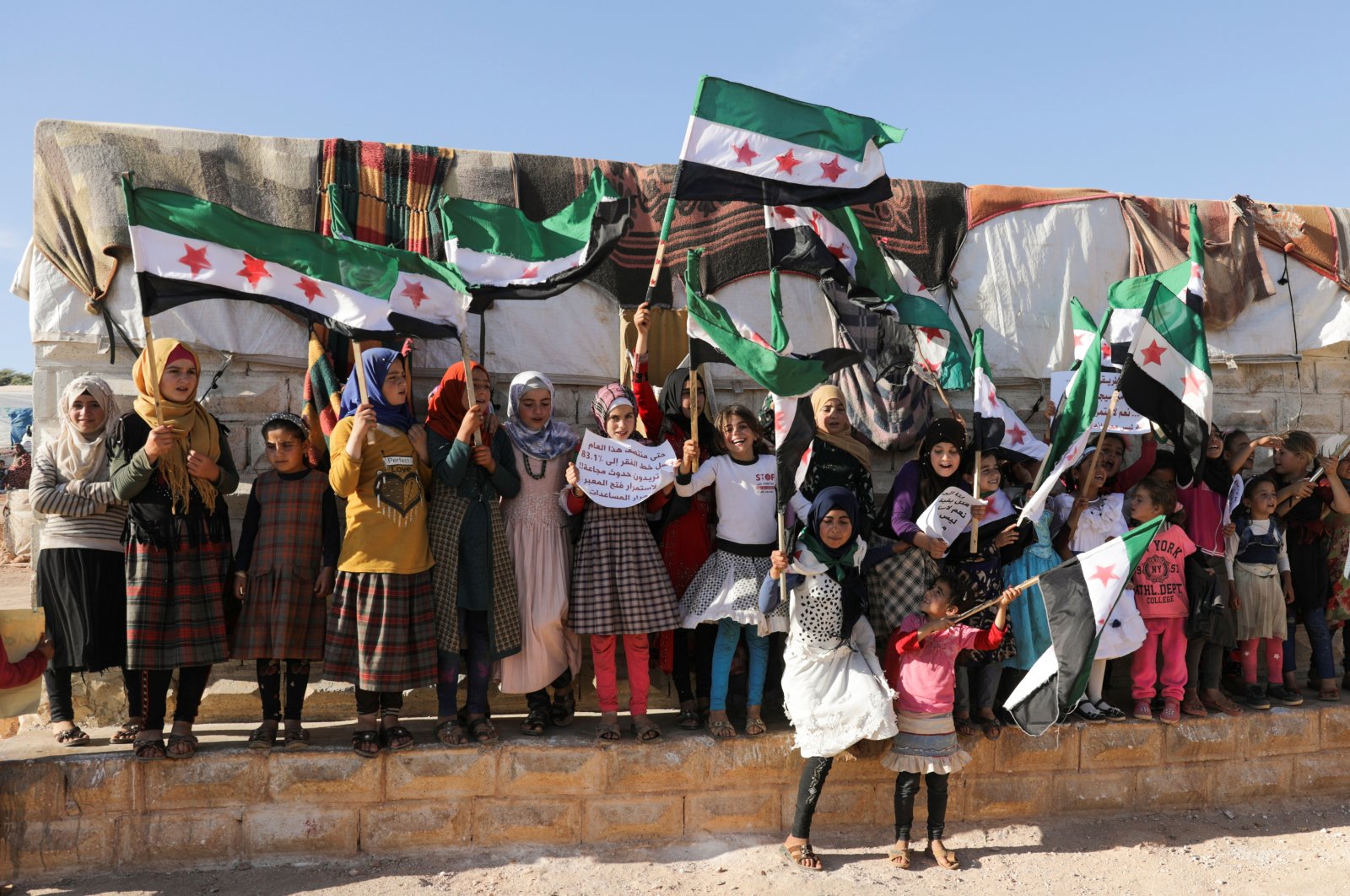 Displaced civilians living in camps in northwestern Syria's last opposition stronghold Idlib fear that Russia will block the extension of United Nations-led cross-border aid operations through Turkey to the region.

The aid operation has been conducted through the Bab al-Hawa border gate linking southern Turkey to northwestern Syria for a year. The U.N.-mandated aid operation is set to expire on July 10 and needs reauthorization from the U.N. Security Council, which includes the Bashar Assad regime's main backer Russia, which will likely oppose the renewal of cross-border aid.

Millions of people who had to flee their homes due to the regime's deadly attacks targeting civilians and residential areas now worry about the threat of starvation and medical crisis.

Mohammad Ramazan, a civilian living in the region's camps for displaced civilians, told Anadolu Agency (AA) that they only want to live safely, like normal people in the rest of the world.

"Closing the border gate, which is the lifeblood of civilians, means that civilians are starving. People live safely in tents. We feed ourselves with the aid," he said.

Stating that their only hope is the aid coming from the border gate, Ramazan added: "Before we migrated, we lived in peace and security in our homes. The Assad regime and Russia could not kill us with guns, planes and cannonballs, they want to kill us by closing the humanitarian aid gates."

Jamal al-Deiri, one of those who settled in the Teh camp, said that Iran, Russia and the Assad regime massacred the people and forced them to live in tents by displacing them.

Emphasizing that Russia wants to close the Bab al-Hawa border gate, which is the lifeblood of civilians, Deiri said: "They could not kill the people with warplanes. They want to strangle 4 million civilians by closing the border gate."

Deiri called on the U.N. not to close the border gate and emphasized that if the gate is closed, medicine and food support will be cut, and civilians living in tents will have no other option.

Muhhane Ismail, one of those who immigrated from the Hama countryside and took shelter in the camp, said, "Russia wants to kill civilians with hunger, as if it wasn't enough to kill them by plane."

He added: "Civilian people rely first on God and then on a parcel of help from the border. How will people live and how will they be treated when the doors are closed?"

Heysem Gajar, who took shelter in the camp, said that if the border gate is closed, the civilians living in the tents will face starvation and be sentenced to death.

Stating that the civilians living in the tents do not have job opportunities, Gajar said: "We live in a mountainous area, we have no land to work on. We did not come here arbitrarily."

Calling the U.N. for compassion for the civilians living in tents, Gajar said: "Russia has made a habit of starving and forcibly displacing civilians. The world should not leave civilians alone. We prefer to fight in harsh living conditions in summer and winter rather than going to areas controlled by the Assad regime."

In another camp in northwest Syria, Mohamad al-Abdullah relies on the U.N. aid to treat a spinal injury that could have paralyzed him had it not been for cross-border aid.

But that life-saving assistance is now threatened by the Russian veto. With Moscow threatening to shut the region's last crossing from Turkey at the U.N. Security Council vote in the coming days, the 17-year-old and millions like him risk losing a vital conduit for medical and food supplies.

"All my medicine comes from abroad through the crossing," Mohammad told Agence France-Presse (AFP) from his tent in the opposition-held Syrian town of Azaz.

He still has pieces of shrapnel lodged in his back and ribs from a 2014 car bomb blast that wounded his spine, killed his father and prompted him to flee eastern Syria to seek refuge in the northwest.

"If (the shrapnel) moved only a millimeter, I would be paralyzed. That's what the doctors told me," he said.

"If the crossing closes, I will sit idly in this tent, unable to move, because if it wasn't for my medicine, I wouldn't be able to stand up from the pain."

The painkillers he desperately needs reach Azaz via the opposition-controlled Bab al-Hawa crossing on the Turkish border, the only entry point for U.N. assistance into Syria's beleaguered northwest.

More than three million people live in the Idlib region in Syria's northwest. Around 2.4 million people there need humanitarian aid, according to the U.N. It says some 1,000 trucks have passed through the crossing every month over the past year, carrying in vital vaccines, hospital equipment and medicine for diabetes, tuberculosis and leishmaniasis. NGOs have warned that re-routing such supplies through regime-held territory could lead to disaster.

"The Syrian authorities have a long history of diverting and obstructing humanitarian aid," Amnesty International said in a statement.

It warned against a "medical crisis" in the northwest similar to the one currently gripping northeastern Syria after the closure of another checkpoint there under Russian pressure last year.

The International Rescue Committee has pushed for Bab al-Salam to be reopened, arguing that "one crossing alone has proved insufficient to meet the scale of needs".

US warns Russia not to veto Syria border access

Most recently, the United States warned Monday that Russia would put at risk hopes for more constructive relations if it uses its U.N. veto to shut the sole border crossing for aid into Syria.

Secretary of State Antony Blinken joined Italy in leading talks in Rome of the U.S.-led coalition to defeat the Daesh terrorist group. There, they discussed the Bab al-Hawa crossing into Syria from Turkey.

Blinken told reporters it was crucial to work on "broadening cross-border assistance, which is essential in reaching millions of Syrians who are in dire need of food, medicine, Covid vaccines and other lifesaving aid."

The crossing is due to close on July 10 without U.N. authorization for another year and Russia – which has already succeeded in reducing the border openings to one – has not ruled out using its veto power to block an extension.

Russia and Iran are the chief supporters of Assad – who has wrested back control of most of Syria after a brutal decade-old civil war – and say that Damascus as the sovereign power should have sole prerogative over aid deliveries.

A senior U.S. official who accompanied Blinken said when asked about the Russian position, "Obviously we don't want any permanent U.N. Security Council member to veto that."

"What's been made clear all the way from the president all the way down to much lower-level officials to the Russians and to others is that we want to have a constructive relationship with Russia on the areas on which we can work together and we think Syria ought to be one of them," the official said.

"But the test is going to be whether or not we can maintain and expand these cross-border mechanisms," he said.

"If we're not able to work together on this basic human need, that would make it very difficult to work on anything else with the Russians with regard to Syria more broadly."

President Joe Biden raised the issue when he met on June 16 in Geneva with his Russian counterpart Vladimir Putin.​​​​​​​

Both presidents had voiced hope that the summit would bring more stability to U.S.-Russia relations after months of soaring tensions.

However, Russia did not make any commitment to renew the cross-border aid operation into northwestern Syria during the meeting between Biden and Putin.

U.N. Secretary-General Antonio Guterres last week urged all Security Council nations to reach a consensus to preserve the crossing, which allows aid to reach some three million people living in the Idlib region.

The U.N.'s special envoy for Syria also said last week that cross-border access to Syria is "absolutely vital" to ensure the country's already dire humanitarian situation does not dramatically worsen.

Geir Pedersen, the U.N. special envoy, told the Security Council it "is essential" to renew the mechanism for another 12 months to continue the ongoing "large-scale cross-border response," which he said will "save lives." "Your unity on this will be critical," he told council members.

The U.N. agencies also warned that northwestern Syria faces the "worst situation" since the war started, with low food security and people facing illness and death due to no access to medicine.

While a draft U.N. Security Council resolution circulated by Norway and Ireland envisages authorizing the delivery of vital humanitarian aid to war-torn Syria across the borders of Turkey and Iraq, Turkey’s envoy to the United Nations urged keeping the Bab al-Hawa border gate open for another 12 months.

The Security Council approved four border crossings when deliveries began in 2014, three years after the start of the Syrian conflict. But in January 2020, Russia used its veto threat in the council to limit aid deliveries to two border crossings, and in July 2020, its veto threat cut another. So today, aid can only be delivered through the Bab al-Hawa crossing from Turkey to Syria’s opposition-held northwest, and its mandate ends on July 10. If it is not reauthorized, monthly food deliveries for 1.4 million people, millions of medical treatments, nutrition for tens of thousands of children and mothers and education supplies for tens of thousands of students will stop.