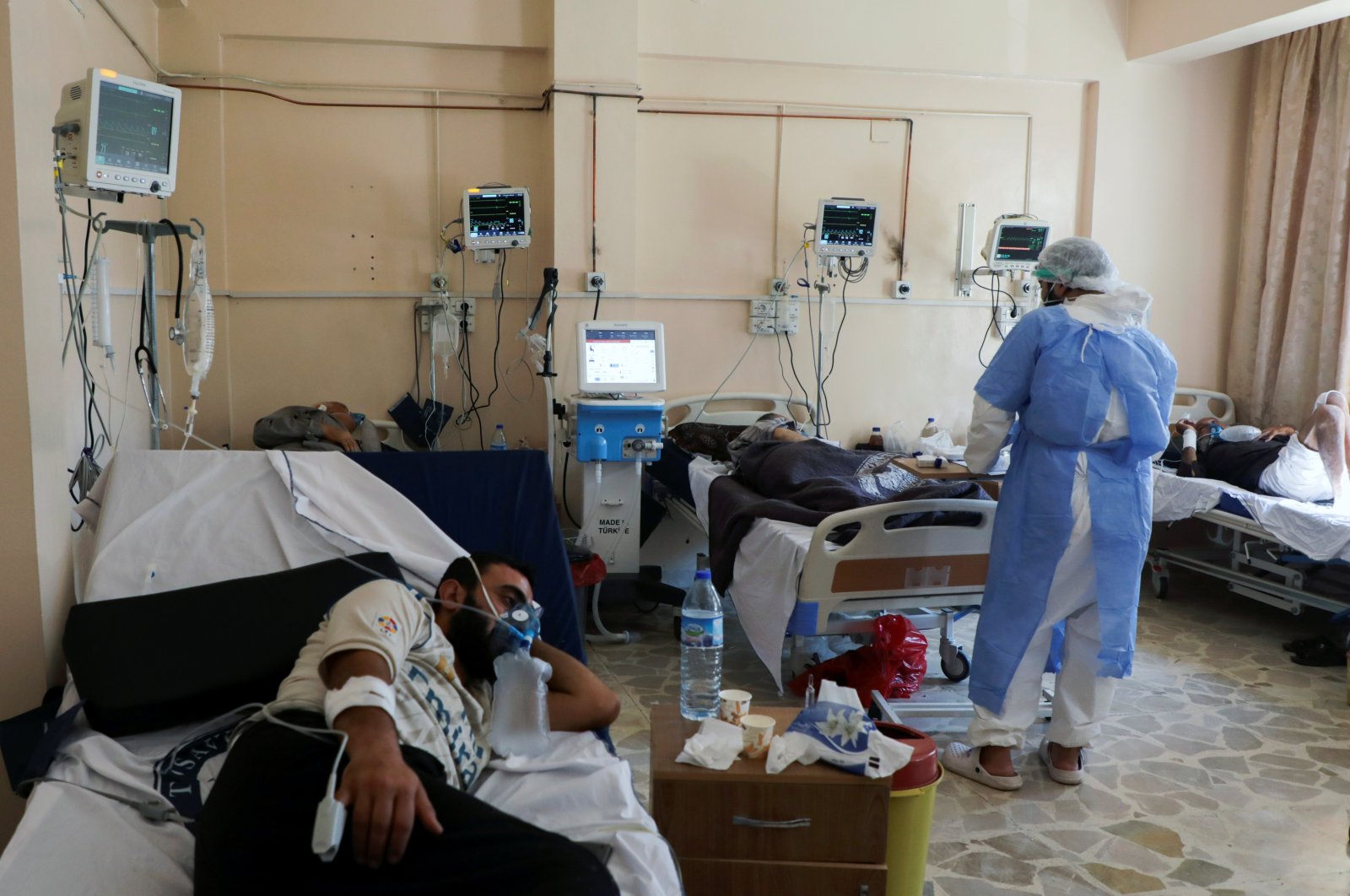 A medical staff member assists patients suffering from the coronavirus disease inside the COVID-19 ward of a hospital in the opposition-held Idlib, Syria Sept. 26, 2021. (Reuters Photo)
by Daily Sabah with AFP
Oct 01, 2021 10:50 am

COVID-19 cases have soared to critical levels across Syria in recent weeks with health facilities reaching maximum capacity and doctors unable to cope.

In some of the areas most affected by the country's decade of conflict, health infrastructure is insufficient while basic medical supplies and vaccine doses are in short supply.

While the number of cases is spiking across the country, the areas that seem worst hit by the pandemic's latest wave are those in the north.

In the Idlib region, where around half of the more than three million residents were displaced by conflict, the number of recorded daily infections has increased sharply and now often tops 1,000 a day.

"From August to September the confirmed number of coronavirus cases in northwest Syria jumped by 144% to 71,715 as of Sept. 28 with 1,151 deaths," Britain-based charity Save the Children said. The charity said only a dozen beds in intensive care units remained for the entire region and called for emergency international assistance to avert an even bigger disaster.

"One death from coronavirus is one too many, but to hear that a baby and a 17-year-old have also been claimed is devastating," said Sonia Khush, the organization's Syria response director. "The world must not look away," she said.

The organization called on the international community – especially countries that have already vaccinated a decent part of their population – to give support and fund relevant authorities and nongovernmental organizations (NGOs) to combat the pandemic and help affected children.

"Without an urgent injection of funding, cases will continue to rise, and thousands of children living in some of the world’s most dire conditions will not even get the opportunity to access some of the basic relief our services provide to them," Khush said. "The world must not look away," she added.

The coronavirus cases are also increasing in the country's northeast, which is mostly controlled by the PKK terrorist group's Syrian branch, the YPG, and in regime areas, where pro-Assad forces have been long accused of tossing fuel onto the flames of the regime-created humanitarian crisis.

According to the World Health Organization (WHO), at least 261 regime attacks on health care facilities in Syria resulted in approximately 179 deaths and 363 injuries among health care workers and civilians. In its June report the Syrian NGO Alliance said the regime and its allies had attacked more than 599 health facilities and killed over 930 health workers since 2011. The report underlined that the regime also manipulated both the response to COVID-19 and the number of patients, noting that it corrupted the COVID-19 testing process and health staffs' protective gear, resulting in the death of over 130 Syrian doctors in 2020 in regime-controlled areas.

"Moreover, it continuously violated the International Humanitarian Law and UNSC resolution to protect and neutralize health and humanitarian aid workers despite the inclusion of sites through the Humanitarian Notification system."

According to the report, the regime has abused its role in crossline operations and prevented aid convoys from reaching besieged areas. Around 90% of aid convoys' requests to enter besieged areas were blocked, of which 75% of requests were ignored while 15% were rejected. The 10% that were approved had their medical supplies pulled by the regime.

"The systematic war the regime had against the healthcare sector, and its workers led 70% of Syrian physicians to flee, leaving one doctor for each 10,000 Syrians and making the average of weekly work hours more than 80 hours in the health sector. Throughout the past 10 years, the Syrian Government manipulated, politicized and weaponized humanitarian aid, serving its allies’ interests," the alliance underlined.

"Despite all the mentioned above violations, WHO member states had elected the regime's minister of health on their executive board. This decision leaves us, the humanitarian NGOs, in a state of disbelief, knowing that our constant call to protect health workers and facilities is in jeopardy."

For years, the Assad regime has ignored the needs and safety of the Syrian people during a 10-year war, only eyeing further gains of territory and crushing the opposition. With this aim, the regime has for years bombed civilian facilities such as schools, hospitals and residential areas, causing the displacement of almost half of the country's population.