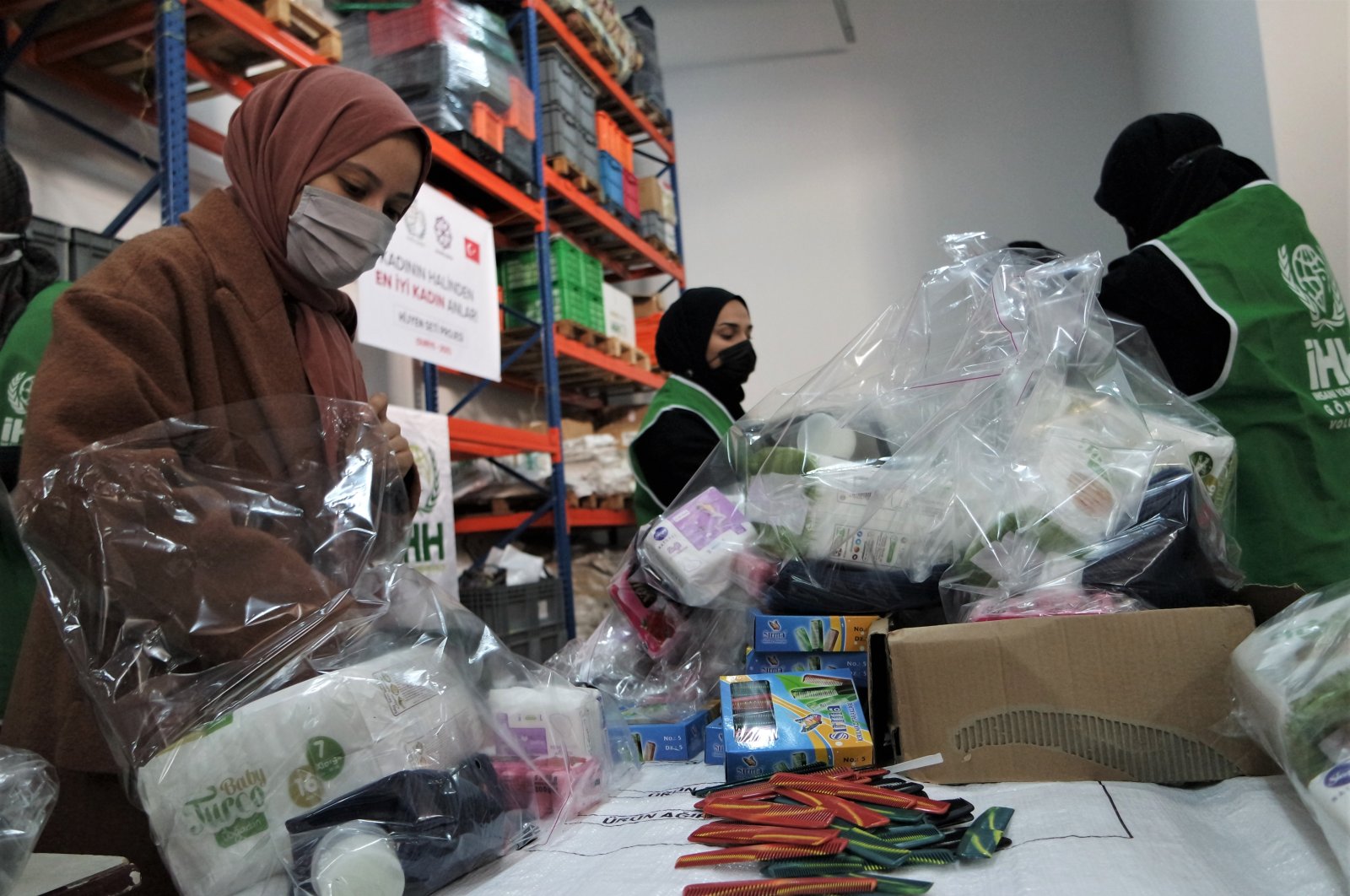 Turkish women from Turkey's northwestern province of Bursa came together to extend aid to Syrian refugees living in camps in northern Syria.

The volunteers of the Huzme Science and Culture Association and the Humanitarian Relief Foundation (IHH), who visited the camps on Afrin, Azaz and Idlib last week, determined that women in the camps lack many basic hygiene products.

The volunteers launched a campaign when they learned that the women who lost their relatives due to the war and who left their homes without even taking a piece of furniture had not even touched their hair for months and that they were deprived of basic hygiene packages despite meeting their many needs.

Some 5,000 hygiene packages that included diapers, fingernail clippers, hairbrushes, cream, soap, shawls and cloth masks were prepared within the scope of the campaign and sent to Syria.

The head of IHH's women's branch in Bursa, Hatice Kaptan, told Anadolu Agency (AA) that when someone mentions "aid" the first things that come to mind are usually food, clothing or fuel. However, she added, the women in the region have needs beyond these.

Pointing out that the victims of war have lived in camps for years, Kaptan said: "We have to think about them since there are no places in there where women can meet their special needs. We prepared 5,000 hygiene packages with the campaign. These include a hairbrush, Vaseline, fingernail clippers and soap," he said.

Kaptan pointed out that the women have experienced great tragedy amid the war and also said:

"In an environment where bombs are falling, you have to leave your house and the items you can buy are very limited. You are forced to be displaced and migrate many times within Syria. We witnessed women trying to shorten their nails by rubbing them on stones. It seems like a very small issue, but in reality, it is a requirement for a decent human life. We have seen that the hands and faces of children are dry due to the harsh conditions, cold and lack of water, which is why Vaseline is also very important."

The camps in northwest Syria are densely populated, and there is insufficient relief reaching them, while the health and education sectors struggle to provide the required services. Even though nongovernmental organizations (NGOs), the United Nations and Turkish institutions and relief organizations struggle to meet the needs of the many civilians in the war-torn country, in the face of the coronavirus threat, existing aid is insufficient. Only half of the countries’ medical facilities are still operating.

In the latest effort, Turkey has been conducting a project to build briquette homes in Idlib for displaced civilians. President Recep Tayyip Erdoğan last week donated TL 250,000 ($37,000) for the home-building campaign. The project is focused on rebuilding war-torn Idlib and was initiated by Turkey's Disaster and Emergency Management Authority (AFAD).

The lives of Syrian people dealing with many difficulties in Syria's tent camps have become much harder due to the recent winter conditions. As the humanitarian catastrophe in the region has reached new heights, people try to survive by taking shelter under trees or shaky tents built in mud and puddles. Many Turkish NGOs and state agencies including the AFAD, the Turkish Red Crescent (Kızılay) and the IHH keep providing vital humanitarian aid and conducting humanitarian efforts in the region hosting nearly 4 million people.

Huzme Science and Culture Association head Bükrenur Aktaş also expressed that the visit to the camps urged them to work even more to help the people in need in the region.

Explaining that they realized that much more work should be done in terms of education and hygiene and they immediately started to prepare an aid truck, Aktaş said:

"We have a conscious audience. We made an announcement, and people started to send their aid on the occasion of this announcement. At this point, we have created a very nice hygiene package together with IHH. We made packages. One of them is diapers. We included three diapers. Soap is also needed. Cleaning, hygiene conditions are very challenging. We put in soap, nail clippers and a hairbrush. Women and children live there, and they need to brush their hair."

Aktaş added that the aid packages were carefully prepared and sent to the region.

Most recently, an outbreak of Leishmaniasis disease has caused a fresh humanitarian crisis among those living in the camps. It is reported that infrastructural problems including open cesspools and damaged sewer systems have triggered such outbreaks.