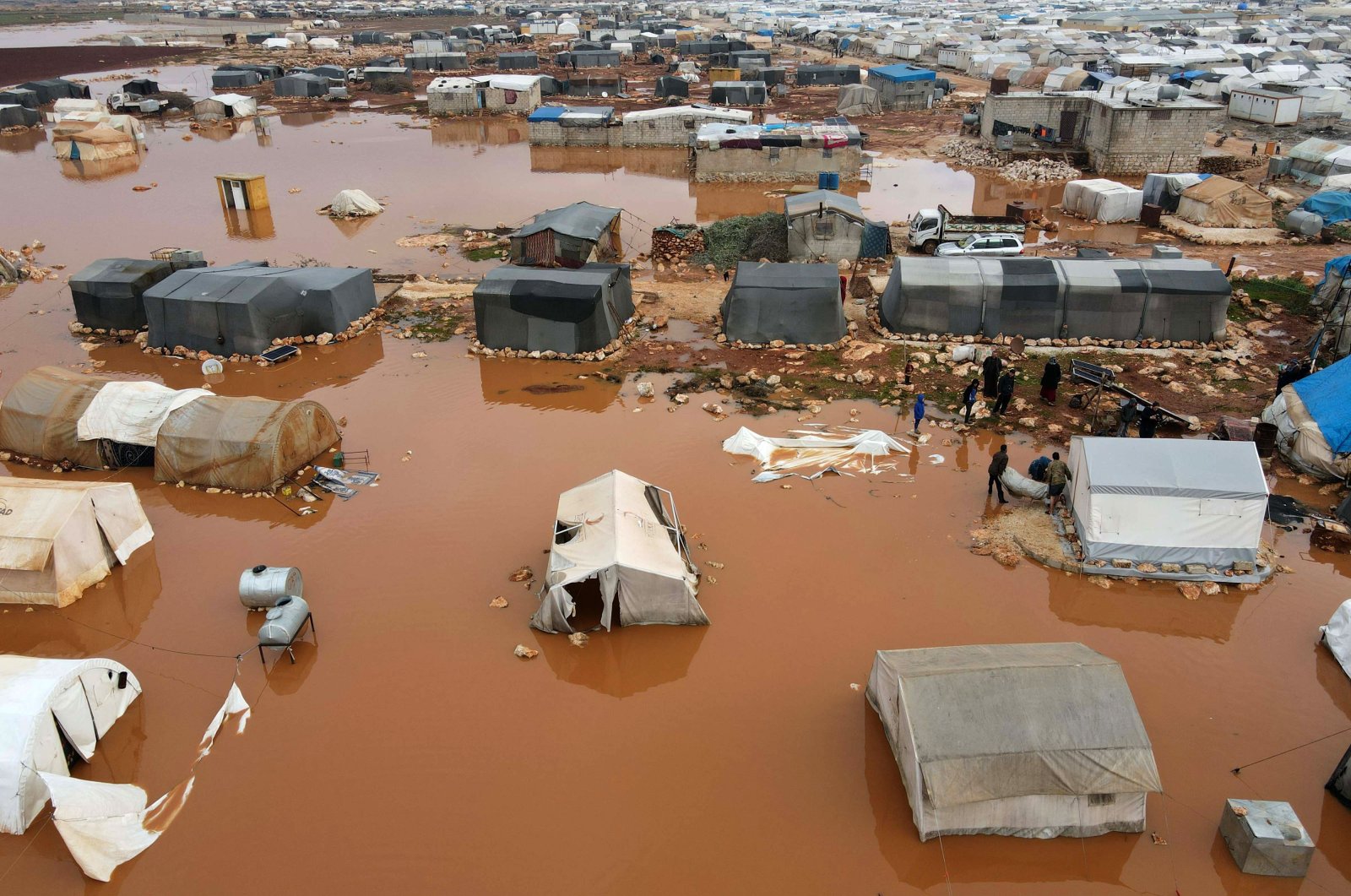 An aerial picture shows flooded tents after heavy rain at a camp for displaced Syrians near the town of Kafr Lusin by the border with Turkey, in northwestern province of Idlib, Syria, Jan. 19, 2021. (AFP Photo)
by DAILY SABAH WITH AA Jan 26, 2021 1:17 pm

The lives of Syrian people dealing with many difficulties in rural Idlib's tent camps have become much harder due to the recent winter conditions. As the humanitarian catastrophe in the region has reached new heights, people try to survive by taking shelter under trees or shaky tents built on mud and puddles. Many Turkish NGOs and state agencies including the Disaster and Emergency Management Authority (AFAD), the Turkish Red Crescent (Kızılay) and the Humanitarian Relief Foundation (IHH) keep providing vital humanitarian aid and conducting humanitarian efforts in the region hosting nearly 4 million people.

Speaking to the Anadolu Agency (AA), Şanlıurfa Humanitarian Aid Platform Chair Osman Gerem said Tuesday that the oppression, ferocity, hunger and misery continue in the Idlib region, which has been experiencing a kind of "apocalypse."

Underlining that people have been struggling with very hard life conditions, Gerem said: "Last year, people had to flee their homes due to the regime attacks in the region. They came to the areas near the Turkish border with a glimmer of hope."

He said that these people took refuge in camps near the border, but the conditions there have been getting worse since then: "Most of their tents rotted due to the sunlight last year. When it rains, it becomes like a sea of mud. Last week, camps were covered with mud due to the heavy rains. People try to live on the water. People struggle with rain and mud as well as hunger and poverty."

Heavy rains in Idlib that started in the night and continued into the day have flooded 110 tents belonging to displaced civilians, affecting 50,000 people last week.

Speaking on the dire condition of many of the displacement camps in Idlib as a consequence of the heavy rain, Mark Cutts, the U.N.'s deputy regional humanitarian coordinator for the Syria crisis, last week wrote: “More funding is urgently needed to upgrade these camps and get people out of these appalling conditions.”

Stating that there are too many people who are in dire need of urgent humanitarian aid, Gerem said that Turkish NGOs conduct assistance efforts for the civilians in the region.

"There are nearly 4 million people living in the region. The population is really big. Our state and civil society organizations conduct efforts. Last winter was very severe; this winter is as well. Last year, we lost a 7-year-old kid named Eva under an olive tree. Almost 200 people froze to death during the last winter. There are also people freezing to death this year. We recently heard that two babies froze to death," he said.

Expressing their concerns about the rise of civilian deaths, Gerem added: "It is not possible to survive in these conditions. People have to live in water and mud. Those people have no other choice to go; they have to live there. We need to spend more effort to prevent people from dying or freezing. We make a call here. We need to launch a campaign this winter for the sake of humanity and brotherhood."

It was recently reported that civilians in Idlib also risk their lives and health by burning old clothes, nylon and plastic to get warm amid harsh winter conditions.

An internal medicine specialist at a hospital in Idlib, Dr. Usame Ammouri, had told AA that material used to warm up in camps leads to various respiratory diseases such as asthma and bronchitis.

“Especially in these days when we struggle with the coronavirus, I recommend our people to stay away from such kinds of burning material,” he stated.

Fires are a common and real threat in the camps due to their potential to spread. Last year in May, two civilians were killed in seven fire outbreaks in one month in the tent camps in the Turkey-Syria border zone. In the village of Deir Hassan, north of Idlib, some 20 tents were totally burned and caused material damage.

İHH's Şanlırufa representative Behçet Atilla also said that their foundation has maintained their assistance with the contribution of philanthropists from Turkey and other countries since the beginning of the civil war in Syria.

Highlighting the situation caused by severe winter conditions, Atilla said: "Our displaced brothers in Syria live under very difficult conditions. The victimhood of people living there has rapidly increased in this winter. Therefore, we expect support from our people for our brothers. We have a heavy wound and burden."

Atilla also underlined that people lose their lives due to the cold and called on people to feel empathy with displaced civilians there.

The İHH for a while conducts a housing campaign for people in Idlib. Saying that these houses only provide a safe refuge for people, Atilla thanked those who contributed to the campaign.

Currently, the AFAD coordinates four camps in the Idlib region and it is also overseeing the construction of 50,000 briquette houses that are expected to be completed soon.