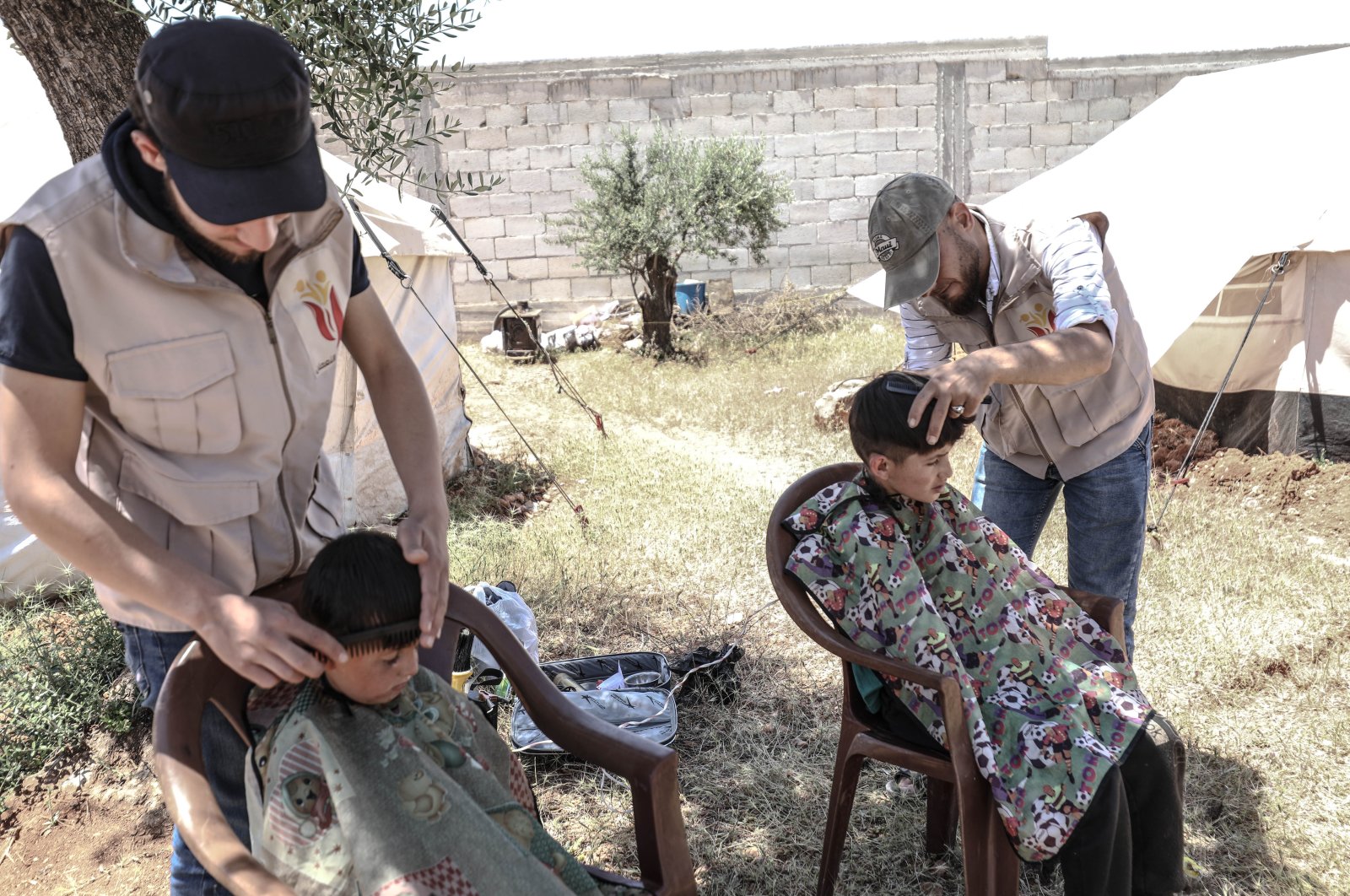 Speaking to Anadolu Agency (AA), Alae al-Safi, one of the volunteer barbers, said that they do it to put a smile on children's faces and make them happy ahead of the upcoming bayram.

He said that many families who had to flee their homes due to the Bashar Assad regime's attacks do not have sufficient money for haircuts for their children.

"We will continue to provide haircuts for children in the camps until the bayram is over," he added.

Ahmed al-Muhammad, a 10-year-old who lives in a camp with his family, expressed his happiness and said that they had not been able to afford to pay for a haircut for months, and he feels better now thanks to the barbers' generosity.

The lives of Syrian people dealing with numerous difficulties in rural Idlib's tent camps have become much harder due to the ongoing pandemic. As the humanitarian catastrophe in the region reaches new heights, people try to survive by taking shelter under trees or shaky tents built on mud and puddles. Many Turkish nongovernmental organizations (NGOs) and state agencies continue to provide vital humanitarian aid and conduct humanitarian efforts in the region hosting nearly 4 million people.

There are around 1.2 million orphans in the northern Syrian province of Idlib who need a huge amount of support, said the head of the Turkish NGO Orphan Foundation.

If the orphans' mothers are alive, they take care of the children, but if not, then their closest relatives such as aunts, uncles and grandfathers look after them. But for children who are deprived of such support, there are orphanages, Murat Yılmaz told AA.

Yilmaz underlined that the needs of these orphanages are enormous – relief agencies make efforts for meeting children's food, clothing, stationery, health and accommodation, such as heating expenditures. He noted that there are dozens of orphanages in Idlib.

Reiterating that Syria has faced 10 years of war, he said his foundation has been active in the country since 2017.

"Our brothers and sisters have been moving to the north of the country toward the Turkish border for many years," he said.

He stressed that his foundation tries to support Syrian refugees both in Turkey and in Idlib.

"As the Orphan Foundation, we also work on sheltering children in the region. We have orphanages for boys and girls in (the Syrian city of) Jarablus, where our orphans are provided shelter and education. And of course, war means great pain, trauma and great suffering," he said.

Yilmaz noted that the foundation also makes substantial contributions to children in the psychological-social sense.