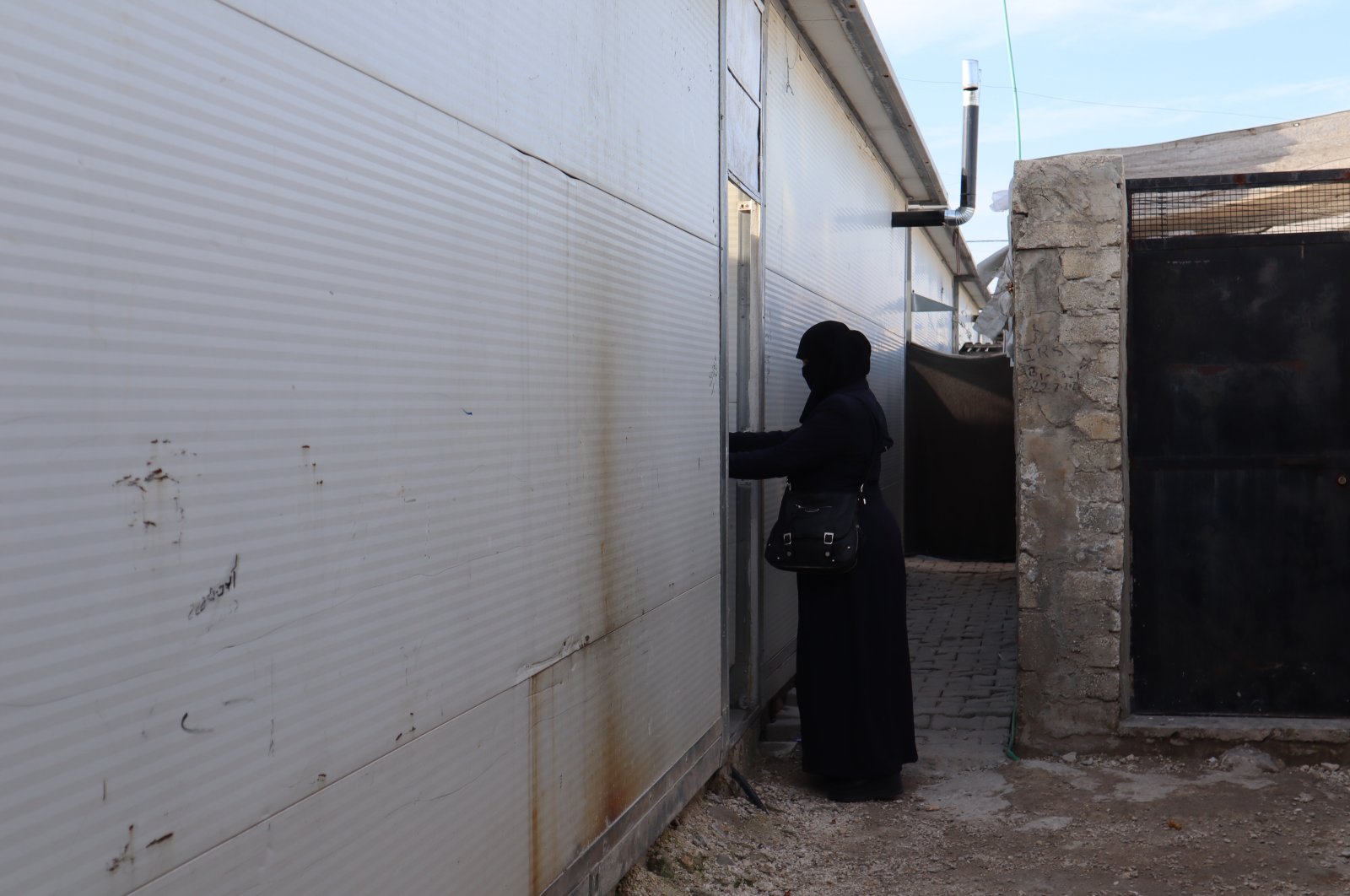 Muna Abban, a Syrian woman who fled the Bashar Assad regime's attacks in Aleppo, is seen in in front of her container house in Syria's Azaz, March 7, 2021 (AA Photo)
by DAILY SABAH WITH AA Mar 08, 2021 12:53 pm
RECOMMENDED

Women in war zones are forgotten, a Syrian woman who lost two of her children in an airstrike carried out by the Bashar Assad regime stated Sunday, underlining that International Women’s Day has no value in war-torn Syria.

Muna Abban, a resident of Syria’s Aleppo and one of the countless victims of Syria's civil war, which is approaching its 10th anniversary, laid a daughter and son to rest six years ago.

Her family, who survived the siege of Aleppo in 2016, emigrated to the northern Azaz district on the border between Syria and Turkey and began living in a container city.

Abban works for her family's livelihood due to her husband's illness. In the remaining time, she takes care of her 16-year-old disabled son, Mustafa.

Speaking to Anadolu Agency (AA), Abban said that she and her family are trying to hold onto life in a two-room container home in Azaz.

"It's been a long time since we celebrated Women's Day. International Women's Day doesn't mean anything to us. It's difficult to live in a war environment in Syria."

"It's even more difficult to live as a woman. Many women lost their husbands in the civil war,” she added.

Underlining that Women's Day has no value in Syria, Abban said: "Women's Day is celebrated nicely in various parts of the world, but everyone forgot about us."

"They do not know what difficulties we are experiencing. We want women around the world to remember Syrian women," Abban said, adding that she is constantly worried about her disabled son, who requires special attention.

Saying she missed her home in Aleppo, she described some of the living conditions in the container city.

"One of my children is disabled and always needs care. He turned 16, but I still care for him like a baby. I feed and diaper him. At the same time, I work at a handicraft center in a camp 5 kilometers (3.1 miles) away from where I live."

Abban goes to the center and shares her experience in handicrafts with women who lost their husbands, adding she is happy with her job despite the difficulties.

After a decade of unfathomable violence and human tragedy that has made Syria the defining war of the early 21st century, the fighting has tapered off but the suffering hasn't.

The displacement, which saw half of Syria's pre-war population of 22 million forced to flee their homes, was the largest induced by conflict since World War II.

Most sought refuge in Turkey, which hosts the largest numbers of refugees in the world with 3.6 million Syrians among them, and safe areas in the countries north that are close to the Turkish border and mostly rid of terrorist organizations by Ankara’s military operations.

Almost 400,000 people were killed in 10 years, according to the Syrian Observatory for Human Rights (SOHR), a U.K.-based war monitor that has continued to keep count after international organizations gave up.

Most of the 117,000 civilians in that grim tally were killed by the regime, whose willingness to turn against the population surprised even its fiercest opponents.

The government has used chemical weapons on civilian areas to subdue pockets of resistance; it has raided densely inhabited areas with crude barrel bombs that sow indiscriminate death and systematically resorted to siege and starvation tactics.

According to the United Nations, 60% of the population is now food insecure. The Syrian pound has lost 98% of its value in a decade and a World Vision report this month put the cost of the war at $1.2 trillion.

While it may look to the outside world like the conflict has essentially ended, the lives of many Syrians have paradoxically never been worse.