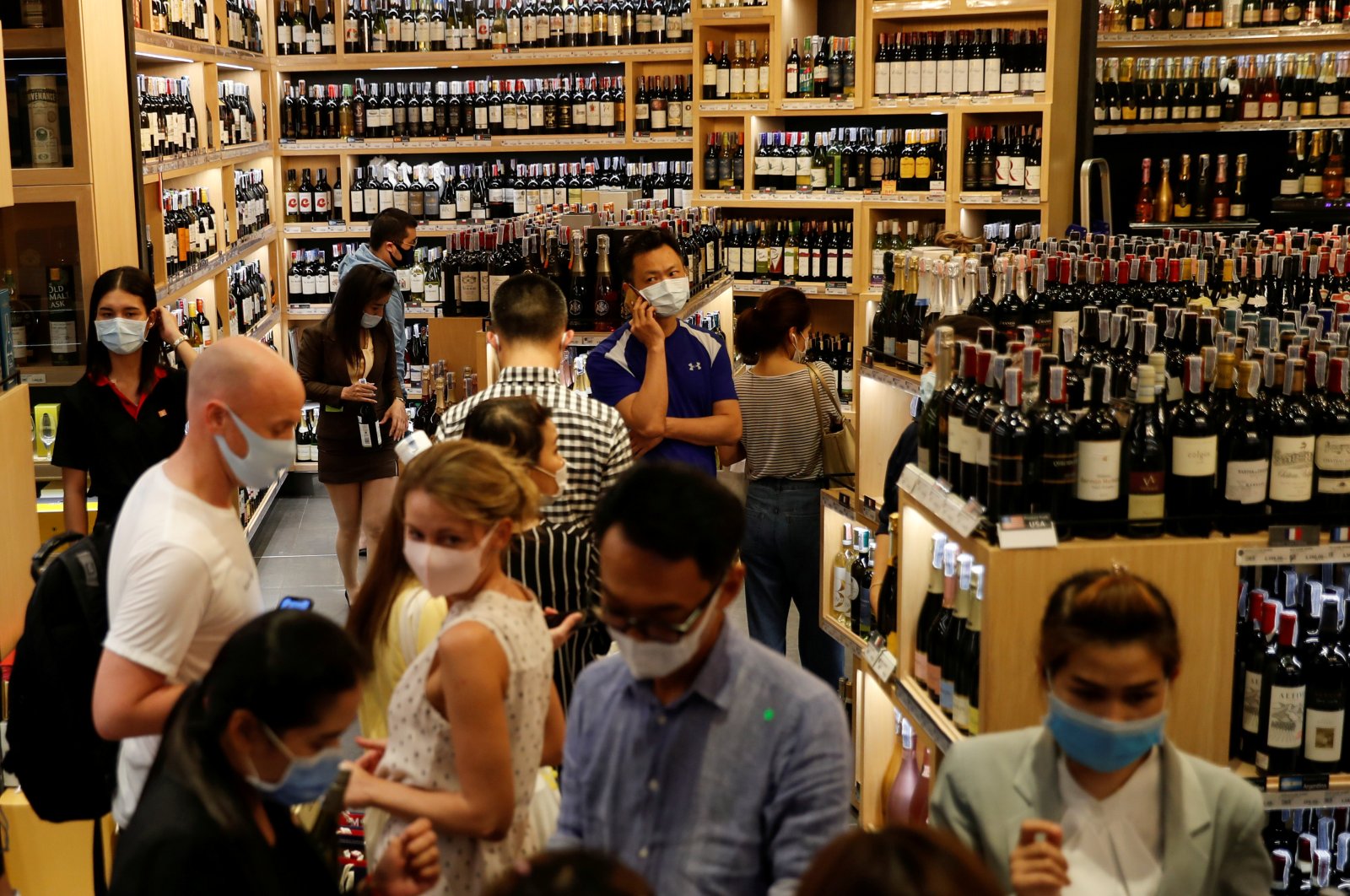 People line up inside a liquor shop after Bangkok and several other provinces announced a 10-day ban on alcohol sale starting April 10 during the coronavirus outbreak in Bangkok, Thailand, April 9, 2020. (Reuters Photo)
by compiled from agencies Apr 10, 2020 6:50 pm
RECOMMENDED

Thailand is trying a new tactic in its battle against the new coronavirus: banning the sale of alcoholic beverages to try to curb irresponsible socializing.

With bars already ordered closed, a number of provinces, as well as the capital Bangkok, have taken things a step further and temporarily outlawed the sale of beer, wine and spirits.

Bangkok’s ban, which started Friday and runs until April 20, had the unintended effect of creating crowds and long lines at stores as people stocked up in the few hours between the ban's announcement and its going into effect.

Authorities have been concerned about the potential for partying during the upcoming Thai new year festival known as Songkran. It is Thailand’s biggest holiday and is notorious for merrymaking and drinking, which contributes to a spike in traffic deaths.

The official April 13-15 holiday has already been postponed and organized celebrations canceled because of the crowds they would attract.

Thailand has confirmed 2,473 cases from the new coronavirus and 33 deaths. At least initially, a number of the country's virus cases were linked to parties at Bangkok nightspots.

Most surveys put Thai alcohol consumption a bit above the global average, but far below the volumes of Eastern Europe.

Unsurprisingly, distillers and brewers are critical of the booze bans. The president of the Thai Alcohol Beverage Business Association, Thanakorn Kuptajit told the business newspaper Thansettakij that drinkers will find what they need in a less managed way, such as driving to areas where there are no bans or purchasing from smugglers, hoarders and underground producers.

Several other countries have instituted bans on alcohol sales, either in selected areas or nationwide, to curb alcohol-fueled gatherings during the virus pandemic. They include Barbados, Grenada, Colombia, Mexico, Botswana, Zimbabwe, South Africa and Greenland.

In South Africa and Greenland, officials specifically said the ban was also imposed to try to curb domestic violence that might increase in volatile situations where families are cooped up in close quarters, often with a loss of income.

On the other hand, Russian retailers have seen a sharp spike in alcohol sales in recent weeks, with consumers rushing to buy vodka, whisky and beer at a time when Moscow and other regions have imposed partial lockdowns to stem the spread of the coronavirus.

President Vladimir Putin last week prolonged until April 30 a paid non-working period across Russia, which has so far reported 10,131 cases of the novel coronavirus.

Many Russian companies have asked employees to work at home, some have told them to take unpaid leave, while others have cut salaries or fired people. In Moscow, residents are only allowed to go out to buy food or medicine at a nearby store, get urgent medical help, walk the dog, or take out the trash.

Magnit, one of Russia’s largest food retail chains, said it had seen double-digit growth in alcohol sales since partial lockdowns were introduced across the country.

Lenta and O’Key said alcohol sales had increased by a third.

The manager of a major alcohol supplier said sales of inexpensive imported alcohol had doubled in annual terms since the measures came into force.

“People are grabbing everything they can – vodka, cognac and beer,” said one employee at a budget supermarket in the Moscow region who was restocking shelves with vodka. “People mostly buy whatever is cheapest.”

Sultan Khamzaev, head of Sober Russia which campaigns to reduce alcohol consumption, said the spike in sales was driven by long holidays, stress, fears that alcohol would run out, and a belief among many Russians that alcohol offers some protection against the new coronavirus.

Heavy drinking has long been considered a serious health hazard in Russia, especially among men, but alcohol consumption has fallen sharply over the last decade.

Authorities have called on Russians to refrain from self-medicating with alcohol and said drinking can neither cure COVID-19 or prevent someone from catching it.

“Attempting to treat everything with alcohol and delaying medical treatment definitely worsens the situation when a patient arrives (at a hospital) when it is already impossible to save him,” Health Minister Mikhail Murashko said on television this week.

Yet the Ministry of Industry and Trade has called on regions not to set restrictions on the sale of alcohol, citing the potential for “serious social tension” if curbs were imposed.