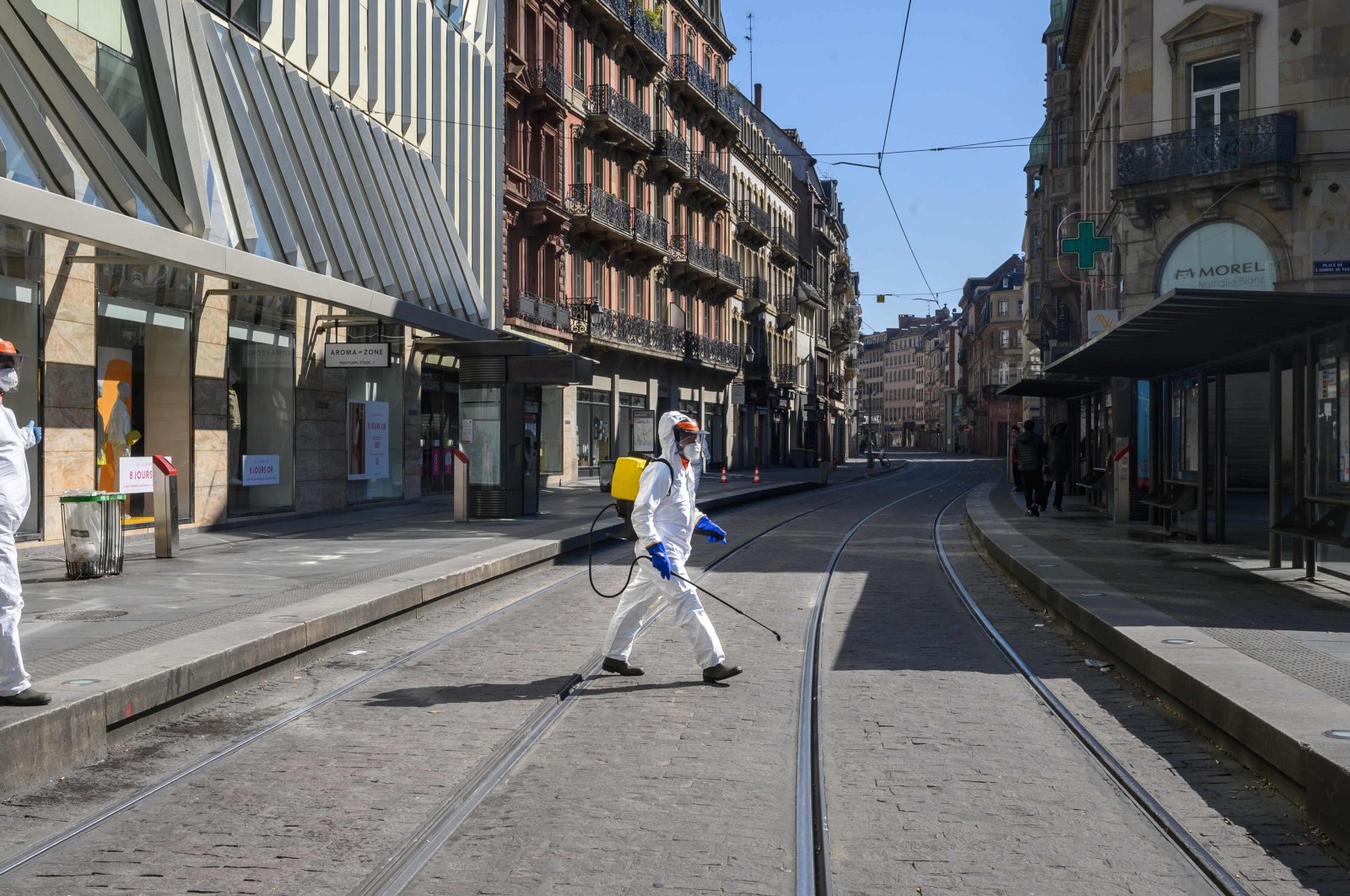 An employee wearing protective gear sprays disinfectant at a tram station in central Strasbourg on April 1, 2020, on the 16th day of a lockdown aimed at curbing the spread of the coronavirus. (AFP Photo)
by French Press Agency - AFP Apr 03, 2020 9:44 am
RECOMMENDED

The U.N. General Assembly on Thursday approved a resolution calling for "international cooperation" and "multilateralism" in the fight against COVID-19, in the first text to come out of the international body since the outbreak began.

The resolution, approved by consensus, also stresses "the need for full respect for human rights" and that "there is no place for any form of discrimination, racism and xenophobia in the response to the pandemic."

Russia was unsuccessful in opposing the resolution with its own text that was supported by four other countries.

The U.N. resolution emphasizes the central role of the body in the global health and economic crisis. It was submitted by Switzerland, Indonesia, Singapore, Norway, Liechtenstein and Ghana and adopted by 188 of the 193 states that make up the body, diplomats said.

The Russian text – which also discussed cooperation but included an implicit demand for a general lifting of international sanctions, seen as a brake on efforts to fight the virus – was supported by the Central African Republic, Cuba, Nicaragua and Venezuela.

Unlike the U.N. Security Council, the resolutions adopted by the General Assembly are not binding but have a strong political value depending on their support.

According to U.N. Secretary-General Antonio Guterres, the coronavirus is "the most challenging crisis we have faced since the Second World War."

Just last week, as the pandemic spread around the world, killing thousands and infecting many more, Guterres warned that unless the world came together to fight the virus, millions of people could die.

On March 23, he called for an "immediate global cease-fire" to protect vulnerable civilians in conflict zones from the ravages of the pandemic.

Few countries have heeded his appeal.

"Unfortunately, hostilities have gone unabated," said Laetitia Courtois, the U.N. representative of the International Committee of the Red Cross (ICRC).

On the Security Council, which has been silent since the start of the pandemic, the five permanent members (the U.S., the United Kingdom, Russia, China and France) are divided on reaching a resolution to support Guterres' appeal.

They have yet to produce a concrete solution, to the increasing exasperation of the 10 nonpermanent members.

The U.S. and China continue to clash over the origins of the virus that first emerged in central China late last year, which Washington wants to highlight.

Beijing and Moscow, which both have veto power, are also reluctant to see the Security Council – which is responsible for global peace and security – take up an issue that has until now been a primary health and economic issue.

"The council missed an opportunity to be relevant – in a way that might have been life-saving – during the early stages of the pandemic," said Stephen Pomper, a policy director for the international think tank Crisis Group and former director of multilateral affairs for President Barack Obama.