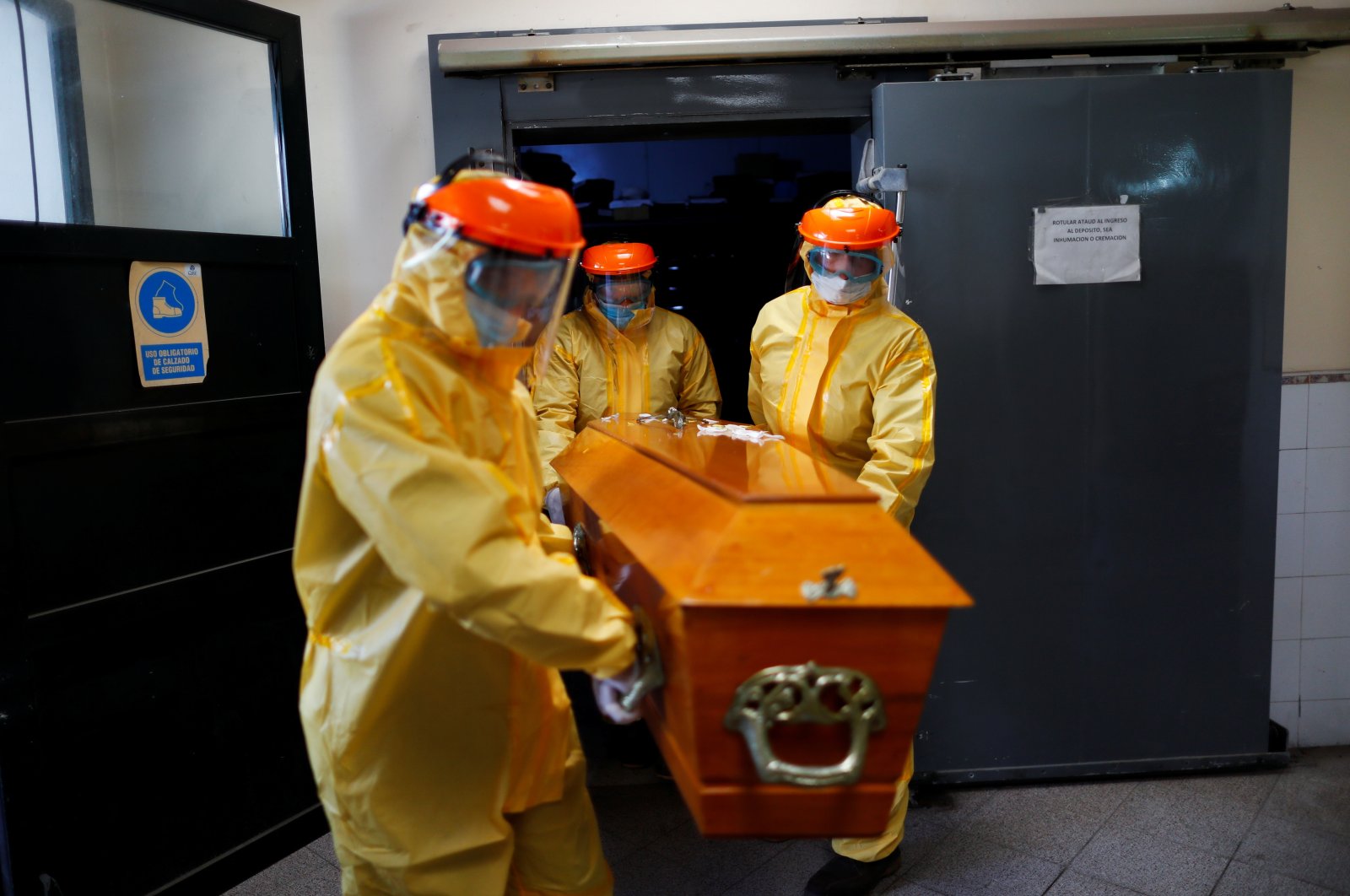 Ernesto Fabian Aguirre, a gravedigger in Memorial Cemetery, carries a coffin with his coworkers wearing protective equipment during an exercise for coronavirus disease (COVID-19) burials, after deaths surpass 70,000 amid a strong second wave of the pandemic and a slow vaccination process, in Buenos Aires, Argentina, May 17, 2021. (Reuters Photo)
by French Press Agency - AFP May 21, 2021 1:36 pm
RECOMMENDED

The World Health Organization (WHO) said Friday that the pandemic has killed up to three times more people than officially reported deaths from COVID-19.

So far, more than 3.4 million deaths worldwide have officially been attributed to COVID-19 since the disease first surfaced in China in late 2019. But according to a global health statistics report from the WHO, far more people have died who would otherwise not have died had it not been for the pandemic, either due to COVID-19 or because they could not get treatment for other ailments.

"Total deaths are at least two to three times higher than officially reported," Samira Asma, the WHO assistant director-general in charge of data, told reporters.

In 2020, the report found there had been at least 3 million excess deaths due directly or indirectly to COVID-19, while the official number of COVID-19 deaths was 1.8 million at the end of the year.

At a regional level, excess mortality estimates for the Americas stood at up to 1.46 million, and as much as 1.21 million in the European region in 2020, representing 60% and 50% more than the reported COVID-19 deaths there, the report found.

Asked how many excess deaths could be attributed to the pandemic up to today globally, Asma said, "I think safely, about 6 to 8 million deaths could be an estimate." The WHO was working with countries "to understand the true human toll of the pandemic so we can be better prepared for the next emergency," she said.

The discrepancy is due to a number of factors, including lagging reporting on COVID-19 deaths in a number of countries and the fact that many people early on died of COVID-19 without being tested.

"This has resulted in many of the official COVID-19 statistics being an undercount," WHO data analyst William Msemburi told reporters. In addition, he said there "are the deaths that can be attributed to the difficult conditions that many people in the world are living under because of the pandemic."

Many people suffering from chronic diseases or acute illnesses other than COVID-19 have been unable to get treatment and access health care due to the measures imposed around the world aimed at reining in the pandemic.

The socioeconomic toll of lockdowns and other measures has also lead to significant increases in depression, and the WHO said there were indications of growing suicide rates in some parts of the world.

"Acknowledging that the reported COVID-19 numbers are only a fraction of this full impact, we have been looking at the excess mortality attributable to COVID-19 for the year 2020," Msemburi said.

This is essentially the difference between the total number of deaths that occurred that year and the deaths that would have been expected to occur had there not been a pandemic.

"Excess mortality gives us a better picture because it captures both of these direct and indirect effects," he said. It still remains unclear how many of the excess deaths counted last year could be directly attributable to COVID-19, he said, adding that the WHO was working to determine the best methods for identifying missed COVID-19 deaths.

The WHO said its excess death estimates were based on data analysis where possible, but also statistical modeling, due to a "critical data gap" in many countries, especially in terms of death registration.

While most countries do well in registering births, only 40% of the world's nations register at least 90% of deaths that occur, Asma said.

And there are huge regional discrepancies. While 98% of deaths are registered in Europe, only 10% of deaths in Africa are registered each year, the report showed. Asma called for countries to invest in scaling up their data and information systems, insisting: "We can only be better prepared with better data."