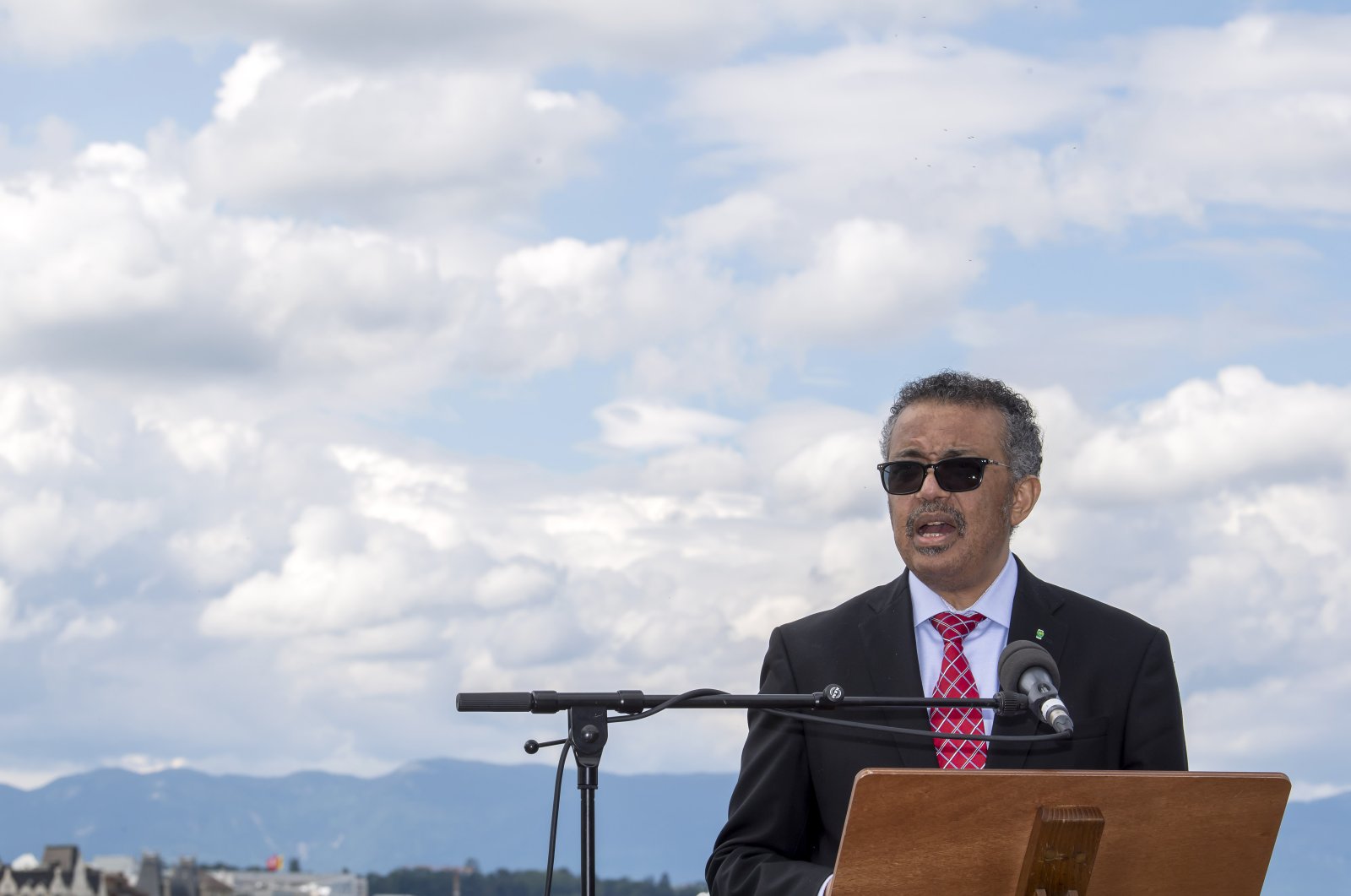 World Health Organization (WHO) Director-General, Tedros Adhanom Ghebreyesus, speaks during the relaunch ceremony of the famous fountain 'Le Jet d'Eau', which was postponed due to the coronavirus outbreak, in Geneva, Switzerland, June 11, 2020. (AP Photo)
by Compiled from Wire Services Jun 12, 2020 7:55 pm
RECOMMENDED

Vaccines for the new coronavirus should be made available as a global public good, the World Health Organization (WHO) said on Friday, to ensure everyone has fair access to any life-saving products that are developed.

"Many leaders...have promoted the idea of making any vaccine a global public good, but that should continue to be promoted," WHO Director-General Tedros Adhanom Ghebreyesus told a press conference.

"More leaders should join the boat, and we need to have a truly global political commitment and global consensus before we even have the product," he said. "That is what we are pushing."

Tedros was speaking after concerns have been raised that some countries including the United States could hoard any vaccines or drugs they develop to combat COVID-19, with poorer countries not getting access to the treatments they need.

The current situation in Brazil, now one of the global hot-spots for the virus, was of increasing concern especially in cities, the WHO's top emergency expert Mike Ryan said.

Brazil's health system was "still coping," although some intensive care units were at a critical stage and under heavy pressure with more than 90% bed occupancy rates, Ryan said.

Tedros previously said that the threat of a coronavirus resurgence remained very real.

"We must also remember that, although the situation is improving here in Europe, globally it's getting worse... We will continue to need global solidarity to defeat this pandemic fully," he said.

In about half a dozen U.S. states including Texas and Arizona, the number of coronavirus patients filling hospital beds is rising, fanning concerns that the reopening of the U.S. economy may unleash a second wave of infections.

Alabama, Florida, North Carolina, South Carolina, Oregon and Nebraska all had a record number of new cases on Thursday.

"I want the reopening to be successful," Harris County Judge Lina Hidalgo, the top executive for the county that encompasses Houston, Texas, told reporters. "But I'm growing increasingly concerned that we may be approaching the precipice of a disaster."

More hospitalizations inevitably mean more deaths ahead, said Spencer Fox, a research associate at the University of Texas at Austin.

"We are starting to see very worrying signs about the course the pandemic is taking in cities and states in the U.S. and around the world," he said. "When you start seeing those signs, you need to act fairly quickly."

Wall Street's main indexes opened sharply higher on Friday, a day after the biggest one-day dive in about three months on fears of a resurgence in infections. Global stocks were up 1.3% after four days of consecutive losses.

The U.S.s has now recorded more than 113,000 coronavirus deaths, by far the most in the world. That figure could be over 200,000 by September, Ashish Jha, the head of Harvard's Global Health Institute, told CNN.