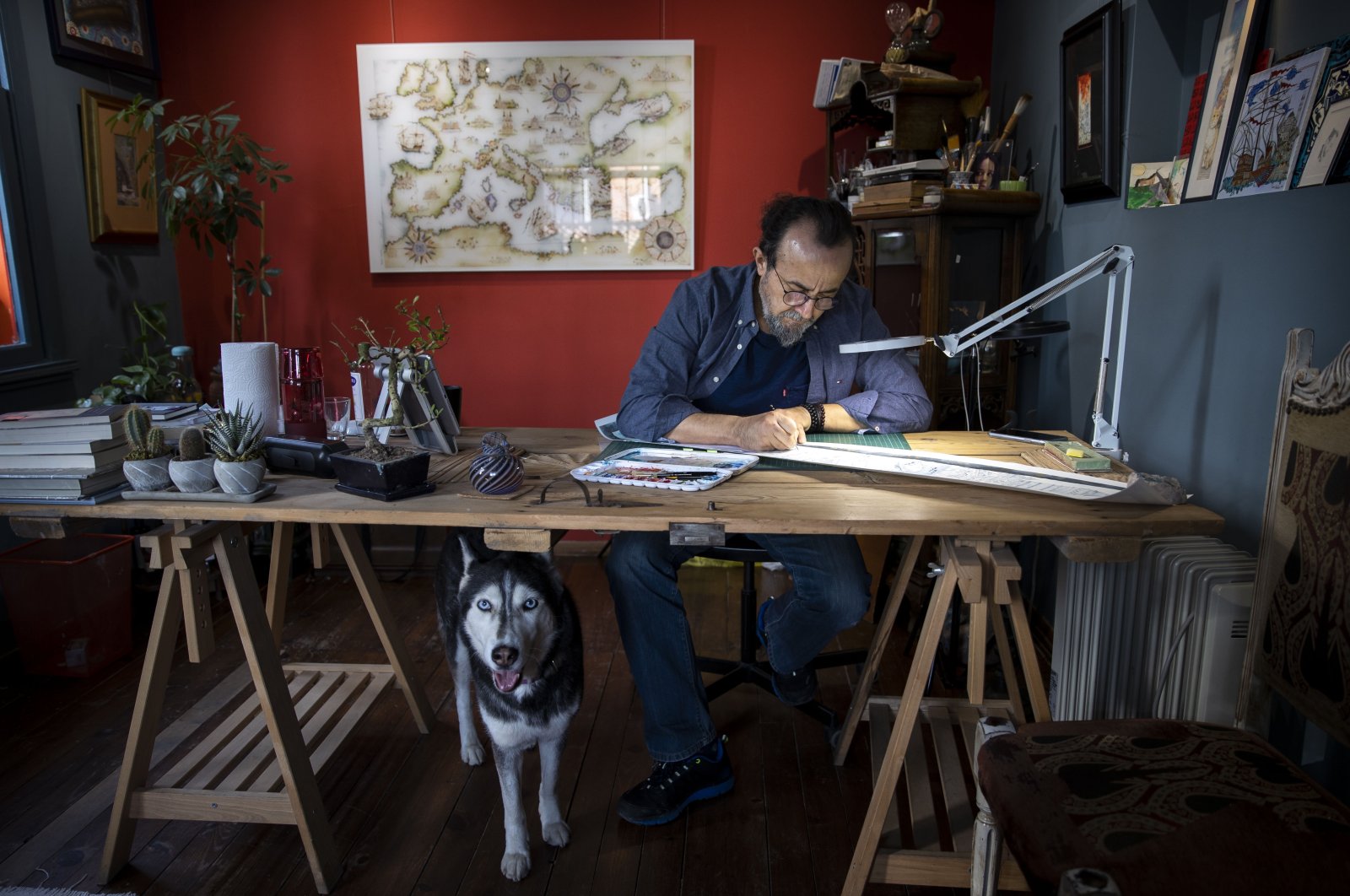 Miniaturist Taner Alakuş looks to extend the art of miniature by focusing on combining it with modern techniques, instead of worrying about fame and income

Taner Alakuş, a lecturer at the Department of Traditional Turkish Arts at Mimar Sinan Fine Arts University (MSGSÜ), has been practicing with the art of miniature, which is included on the Intangible Cultural Heritage List of UNESCO, for 35 years. Preferring to use his imagination to create art instead of tradition, Alakuş often adds modern interpretations to his pieces.

Speaking to Anadolu Agency (AA) about how he started engaging in miniature art, his artistic approach and the current state of miniature art, Alakuş stated that he got to know traditional art at MSGÜ, where he enrolled in 1982 as a student. “Frankly, when I first started university, I had no idea about traditional art. I was thinking to opt for the sculpture, painting or plastic arts departments, which were more popular back then. However, I could not get the necessary test score for these departments and so chose the Traditional Turkish Arts Department. Dündar Tahsin Aykutalp, one of our lecturers, gave me a small presentation about traditional art and this moment made me want to learn and practice traditional arts.”

Thinking that it was better to learn traditional art, the artist enrolled in the program and that is how his adventure began.

According to Alakuş, the university's traditional art department did not have a lecturer to teach miniature and one lecturer was teaching all the relevant courses, such as illumination, tile and calligraphy.

Pointing out that the traditional arts were not so common 40 years ago, Alakuş noted: “For instance, the art of marbling was not as common as it is today. A marbling artist taught us, and we were so interested in his pieces. He also performed recitals for us.”

Explaining that there were not many publications or books on the topic available when he was in university, the artist added: “Students are very lucky now. They have access to a book heaven.” Recalling that students can now access anything through social networks and the internet, Alakuş noted: “In our lessons, lecturers showed slides and then we drew several motifs. Those slides were our only source. We improved with time and created many unique works.” Indicating that even if there are plenty of resources now, they are used loutishly and carelessly, Alakuş said: “I mean, we see a lot of things, but we cannot internalize them because we are not truly looking.”

Alakuş said that as he began to explore art and himself, he learned he could make money from it. Touching on his adventure with miniature art, he explained: “I discovered sahafs, the second-hand booksellers. I started making small miniatures for them and bought books from them in return. I produced a lot of quality works back then.”

Later, the artist saw precious miniatures at Süleymaniye Library that really caught his attention. Noting that he could not believe his eyes when he saw the miniatures, Alakuş said: “I wondered how they could be so vivid, how the gold paint on them could be so bright and how finely they could be done." After this experience, he started leaning more toward the art of miniature.

Alakuş expressed that he also produced works of illumination commissioned by collectors from the Grand Bazaar.

Alakuş pointed out that his acquaintance with painter and miniaturist Yakup Cem was very influential in refining his view of miniature art, expressing that he learned a lot about the unique form of art due to the experiences of Cem in the field.

Emphasizing that he loses track of time when he is busy creating miniature art, Alakuş continued: “I have been painting miniatures for 35 years. I still feel like a university student. You can add anything to the miniature or adapt the miniature to anything. I am not an artist who produces for orders, and I do not like it at all. I produce what I want. For instance, if I feel like painting a dragonfly when I get up in the morning, I sit down and paint it. And to be honest, I also do not pay attention to all miniature techniques every time. What I care about is to produce in line with my imagination and my methods. ”

Highlighting that miniature art is about to become more popular than illumination and calligraphy, the artist emphasized the importance of popularizing miniatures of the Ottoman period in the eyes of the 21st-century generation.

Touching on the inclusion of miniature art in the Intangible Cultural Heritage List of UNESCO, Alakuş said that the advantage of it being international is that it will gain further recognition. However, as an artist, he is not concerned about whether the miniature being a cultural heritage will help it gain recognition. “I am only concerned about producing and carrying this art to a certain point.”

The artist lastly invited those who are interested in miniature art and those who want to learn about it to his workshop, saying: “Come and attend a few classes. We do not demand anything. If you fall in love with this art, you will continue to do it. I always reiterate that you cannot gain international recognition unless you internalize your roots."