As a Francophile paints: On the oils of Nihal Martlı 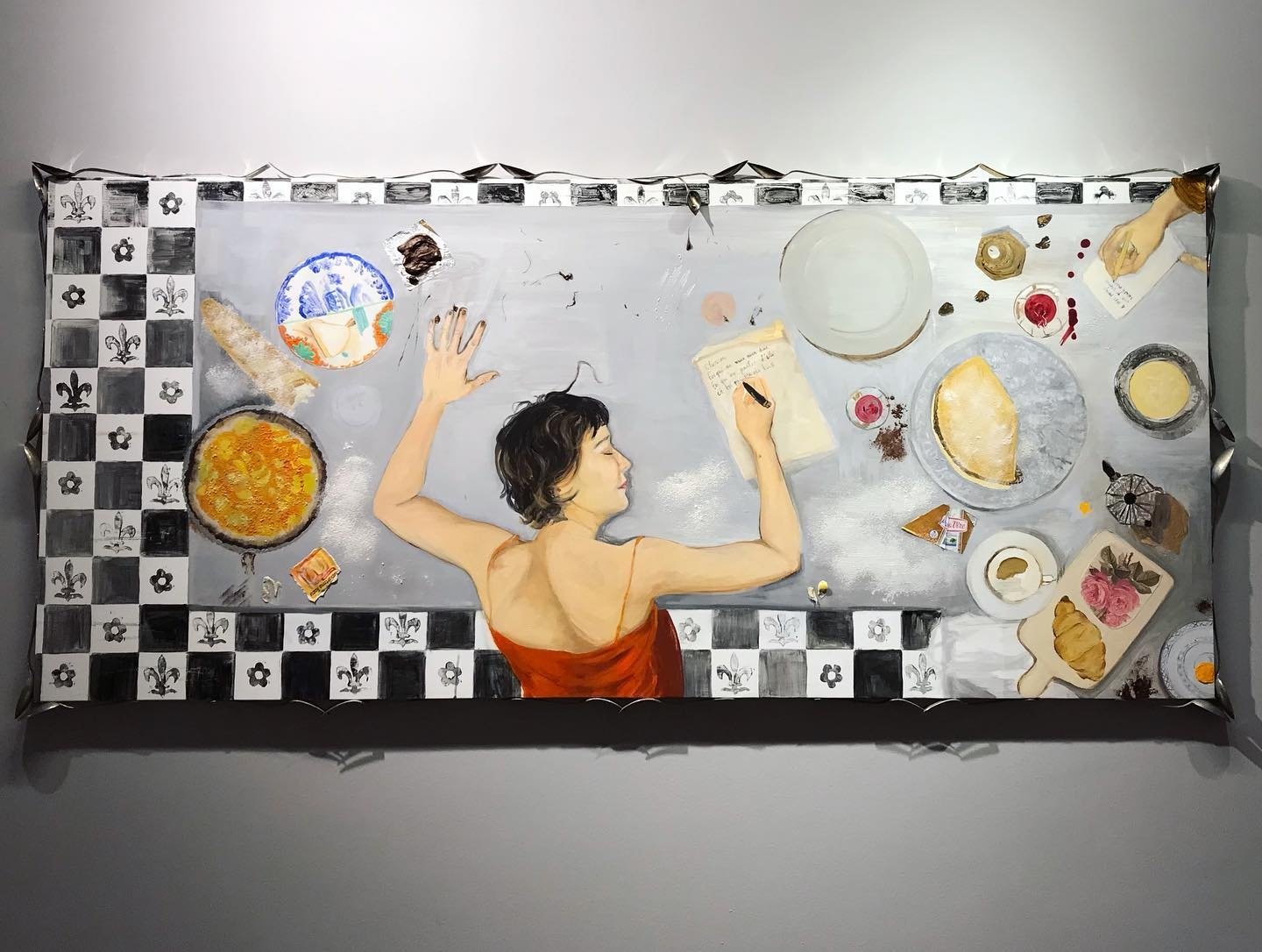 For her latest solo show at C.A.M. Gallery in Istanbul’s Çukurcuma, Turkish painter Nihal Martlı has continued her odyssey as a lover of French art and music, lavishly quoting the visual vocabulary of her romantic muses

The artist was born in a rustic, highland district of mountain villages at the extremity of Turkey’s northeastern tip, bordering the Republic of Georgia. But her art does not hint at her origins. Her paintings are, instead, profoundly immersive expressions of her absorption into French culture, a creative inspiration that bore fruit during her early years as a fine arts student in Aix-en-Provence in southern France following her studies at Ankara’s Hacettepe University.

Her uncompromising, artistic sentiments as a Francophile are clear not only in the aesthetic coloration of her figurative canvases, their lush pigments of feminine poise, all rouge and negligee, but also where the lyrics of French songs are scrawled, in her elegant cursive, around the swirling hair and lipsticked lips of the fictive women she paints almost to the scale of her petite form, and with a sympathetic emotionality that is as powerful as female presence.

At her home studio overlooking the clustering urban sprawl of Istanbul’s crowded Golden Horn inlet, she plays the chanson music of Alain Bashung, his track, “Je me dore” and watches as her cat sneaks between the legs of a coffee table. The title piece of her exhibition, “Art de vivre” (2021) is from the French phrase, “the art of living.” She eyes its contours, a woman in a bathrobe holding a vacuum cleaner.

Even though the centerpiece of “Art de vivre” is almost to scale when Martlı stands next to it, and her face bears an uncanny resemblance, she emphasizes that it is not her. It could be more accurate to say that it is how she feels, or more obviously, how she paints. There is a sense of solitude in the painting, of a woman alone, overwhelmed with her feelings for someone not there, confined to humdrum domesticity.

After her well-attended opening at C.A.M. Gallery along the breezy alleys of Istanbul’s quaint and pleasant Çukurcuma neighborhood of antique shops and art spaces, Martlı spoke of how everyone seemed to assume that the woman in her paintings was her. But she rejected their assertions by stating that the only self-portrait was a small work of ink on paper titled, “A la derive” (2020), which, from the French, means “adrift.”

“A la derive” is a faint, almost colorless painting of a ship facing the far horizon, floating on the sea much in the way that the materials soaked into the surface of its fibrous medium. It is somehow cold, aloof, its direction far-flung and elsewhere. That is almost diametrically opposed to the tone of her figures, most of whom look straight back at their viewers as if vying for their attention, desperate to be seen, even while completely isolated by their homes.

In one characteristic picture, “L’entree” (2021), the lone woman is bedecked in a long, flowing, pink dress. But she is as barefoot as Cinderella prior to slipping into her glass slippers. And she is as bound to mundane, unglamorous housework, which would have her bowing low to the ground, her natural beauty unseen. But in Martlı’s empathic imagination, she is peering back at her onlooker with a gaze that is at once unsuspecting as it is rivetingly model.

The figure in “L’entree,” and her background, play tricks with the eye. It is not entirely clear by simply looking at the otherwise patent images what the cryptic symbolism might be, but with a careful examination, the lack of profane dimensionality is unmistakable. The women that Martlı paints are often floating, a state of being that the painter herself identifies with, as the ground on which they stand, or kneel, is almost wall-like, surreal, flat.

Also, whereas the painted woman in “L’entree” scrubs the floor with one arm, her other hand presses the chimerical hardwood under her feet, but it is not really connected, proportionally, to her upper arm. What appears to be a purposeful mistake is not easy to detect against the very realist evocations of human form. And that’s the way she had created the work in her studio, which, while unfinished, had lent itself to the illusory nature of perception.

If beauty is in the eye of the beholder, so is perfection. And there is nothing that captures the imagination of a perfectionist quite like beholding that which is seen, in their eyes, to be beautiful. Throughout the paintings of Martlı there is a motif of cleaning, body and home. The act of purifying is often synonymous with beauty, as well. Martlı’s art can be understood as a comment on the antiquated, while still enshrined, idea of cleaning as women’s work.

Interestingly, the woman of “L’entree” is washing away a space within the painting where a phrase is written in red. It is apparently from a Portuguese grandmother’s proverb, which says that love requires more yeast than flour. Martlı painted it in a lipstick hue in the Portuguese language, conjuring her dedication to the passionate traditional wisdom of Europe’s Romance cultures.

Even if Martlı is basking in the rich hues and wild strokes of French modernism, she has a kinship with women artists, painters among them who brushed shoulders with its alluring, intellectual abstractions from working-class norms but decided to go their own way, a chief example being that of Frida Kahlo. Her piece, “Salle de Bain” (2020) is reminiscent of Kahlo’s 1938 oil painting, “What the Water Gave Me.”

The visual vocabularies of “Salle de Bain” and “What the Water Gave Me” intersect where the artists’ collective subconsciouses emerge out of the bathwater in which they soak. The only difference is that “Salle de Bain” is painted as if someone were spying on the bather, while “What the Water Gave Me” is from the bather’s perspective. Yet, the artists played with the transparency of water as a vessel for personal memories and mysterious visions.

“Salle de Bain” shows a woman submerged, her hand held off the edge of the tile tub. Her expression is ghastly, however, and is a direct reference to the classic French painting from 1793, “The Death of Marat” by Jaques Louis David. Her body is transformed by the water, into the Bosporus, a marine landscape that inspires as it entraps the artist in her homebound world. There is a ghostly quality to her referential piece, a mortal whisper in the dark of loneliness.

As a slight departure from the usual fare of modernist oil paintings and their affair with Francophile nostalgia, “Salle a manger” (2021) is a mixed technique work that can be said to borrow elements from the postmodernist tradition advanced by American proto-pop painter Robert Rauschenberg, as it’s framed with spoons, and furnished with wrappers and the appearance of foods. The woman has written something: “... and you who tell me everything.”