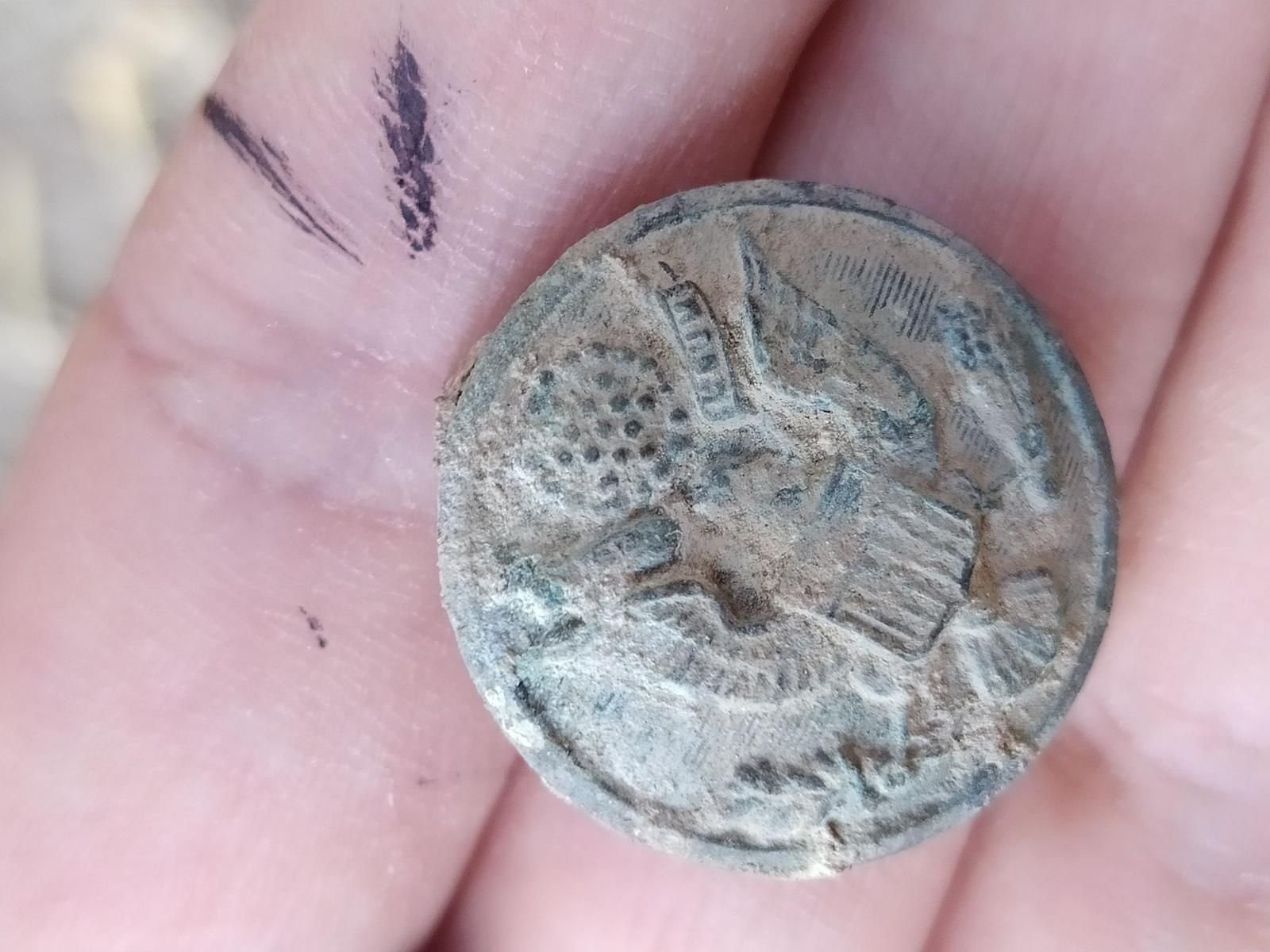 As archaeologists continue excavations in 3,000-year-old Zerzevan Castle, a site once used as a military settlement during the Roman Empire in southeastern Turkey’s Diyarbakır province, recent studies have lead to the discovery of a badge bearing the design of the Great Seal of the United States.

Excavation work first launched in 2014 by the Culture and Tourism Ministry, Dicle University, the Turkish History Association, and some other regional institutions, have unveiled a Roman Mithras underground temple, tower defense, a church, an office building, residential houses, grain and arms depots, bunkers, rock tombs, and water channels, as well as many vital artifacts in Zerzevan Castle to date.

Aytaç Coşkun, a faculty member at Dicle University and the head of the excavation team of the site, told Anadolu Agency (AA) that they found a badge during their recent excavation work.

The motif on the surface of the badge, discovered at a depth of 125 centimeters (49.25 inches) on the eastern walls of Zerzevan Castle, was first designed in 1782, Coşkun said.

"Early examples of this type of badge or buttons were used in the U.S. in the 1850s. Since 1902, this badge-like coat of arms has also been used by the U.S. Army. Similar examples were also used in World War I and belong to the general service unit," he stressed.

He added that the Latin inscription "E Pluribus Unum" was placed on the badge. "This is the first official slogan of the U.S. This slogan, which is Latin (the official language of the Roman Empire), means 'from multiplicity to unity.' It was used to mean the union of the 13 colonies that make up the U.S,” he explained.

“On the right paw of the eagle depiction on the badge is an olive branch, on the left is a tightly drawn bundle consisting of 13 arrows. It is known that these symbols represent the 'power of peace and war,'” he noted.

“A scroll inscribed 'E Pluribus Unum’ is seen on the eagle's beak. The shield, located on the chest of the eagle and representing the states, indicates the unity of the federal government. A bright constellation of 13 stars was used above the eagle's head.

"The unveiling of this badge of copper-zinc alloy at the Zerzevan Fortress is quite interesting and engaging," said Coşkun, adding that there have been no such findings in an archaeological excavation in Turkey or abroad according to their research.

"Similar examples have only been found in the U.S. and the U.K. Detailed analyses ... were performed on the badge. It turned out that post-15th-century technology was used. Also, the analysis showed that the badge remained under the ground for about 250-300 years, since the 18th century,” he noted.

“Early examples of this type of badge or buttons were used in the U.S. in the 1850s. Since 1902, this badge-like coat of arms has also been used by the U.S. Army,” he said, highlighting how surprising it is to find such an item that probably belongs to the period of the U.S. foundation.

Zerzevan Castle sits on a 124-meter (406.82-foot) rocky hill at a strategic point between the ancient cities of Amida and Dara. Due to its location, the castle dominates the entire valley and controls a large area on the ancient trade route.

The history of Zerzevan Castle dates back to the Assyrian period (882-611 B.C.). During the Roman period, the main military settlement was built and used continuously until 639 B.C. up until when the Islamic armies conquered the area.

The site of the castle is also on the temporary list of UNESCO World Heritage Sites. The castle hosts the Temple Mithras, still bearing the traces of the rituals of the religion of Mithraism. According to some conspiracy theories, some members of famous U.S. families visited the temple and performed unknown rituals here.