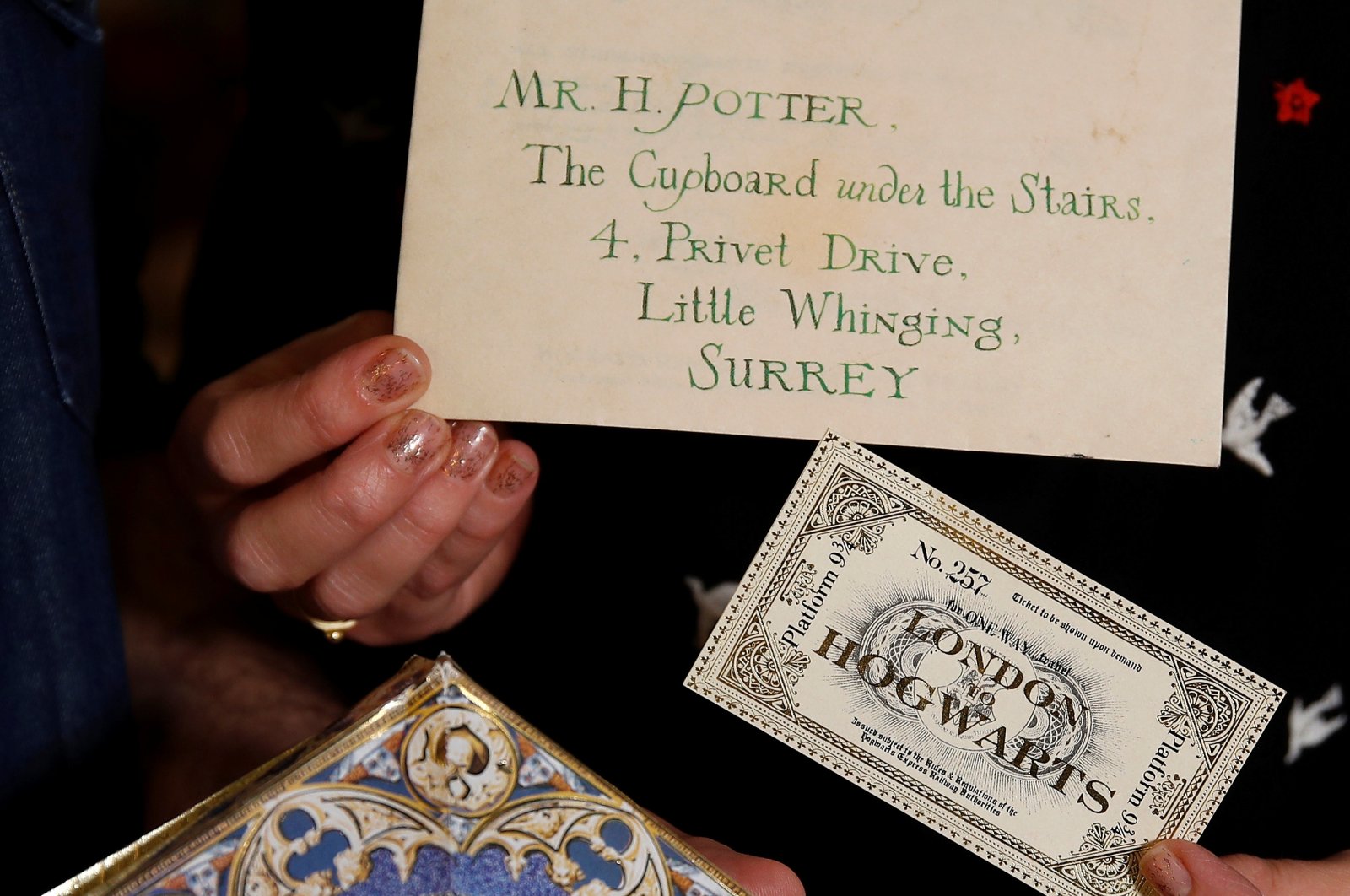 Artists Eduardo Lima and Miraphora Mina who created the graphic style of the Harry Potter movies, hold actual props they made for the movie, "Harry Potter and the Philosopher's Stone," at their store in London, Britain, Nov. 9, 2021. (REUTERS Photo)
by REUTERS Nov 15, 2021 2:09 pm
RECOMMENDED

Surrounded by "Daily Prophet" front pages and books from the magical world of "Harry Potter," graphic designer Mina holds up an envelope countless children have surely wished to receive.

It's from Hogwarts, the school for wizards, and it is addressed to a certain "Mr H. Potter, The Cupboard under the Stairs, 4 Privet Drive, Little Whinging, Surrey."

It was "the very first prop that I got to design on 'The Philosopher's Stone' and the whole series, rather naively thinking that it would just be one simple envelope," Mina told Reuters. "Of course we required many, many (more)."

Tuesday marks 20 years since the release of the film "Harry Potter and the Philosopher's Stone" ("Sorcerer's Stone" in the United States and some other countries). The story of how its young stars were catapulted to global stardom has often been told. But for a generation of other creative professionals, it was also the beginning of a long, fantastical journey, building author Rowling's wizarding world.

Just like the characters in the films, they found themselves at a strange place a train ride from London – Britain's Leavesden Studios – where they learned to make magic.

"The studios became a kind of Hogwarts, a place where people came in and learnt their craft through the 10 years of being involved," said Mina.

Rowling's books were already a sensation before the first film was shot, and the filmmakers knew they had to make the magic look real.

"How do you fly people around on broomsticks to play a game, you know, with a chasing a ball and they're 40 feet in the air and they're children?" recalls Davis, visual effects supervisor on the movie.

Eight "Harry Potter" movies went on to gross $7.8 billion, and a third installment in the "Fantastic Beasts" spin-off film series is coming soon.

Filmgoers these days are used to seeing fantastical worlds conjured up with computer-generated imagery. But for those who worked on director Chris Columbus's original vision of Harry Potter, the film was special because so many effects were achieved the analog way, using sets, props and models built by hand, and a sprinkling of old-fashioned movie magic.

"This was 21 years ago, CGI wasn't quite where it is today and we wanted to get as much reality into everything we did," explained special effects supervisor John Richardson.

"Chris was really up for that and I think it's why those first films have got so much reality to them and the magic. Because everything we could do in camera, we did."

With child actors being taught their regular lessons off-camera by teachers in tents, Leavesden became quite literally a school.

Davis recalled the moment he finally saw hundreds of kids, all wearing their costume gowns, take their seats on the huge studio set of the Great Hall. "Oh my God, you – we're in Hogwarts."