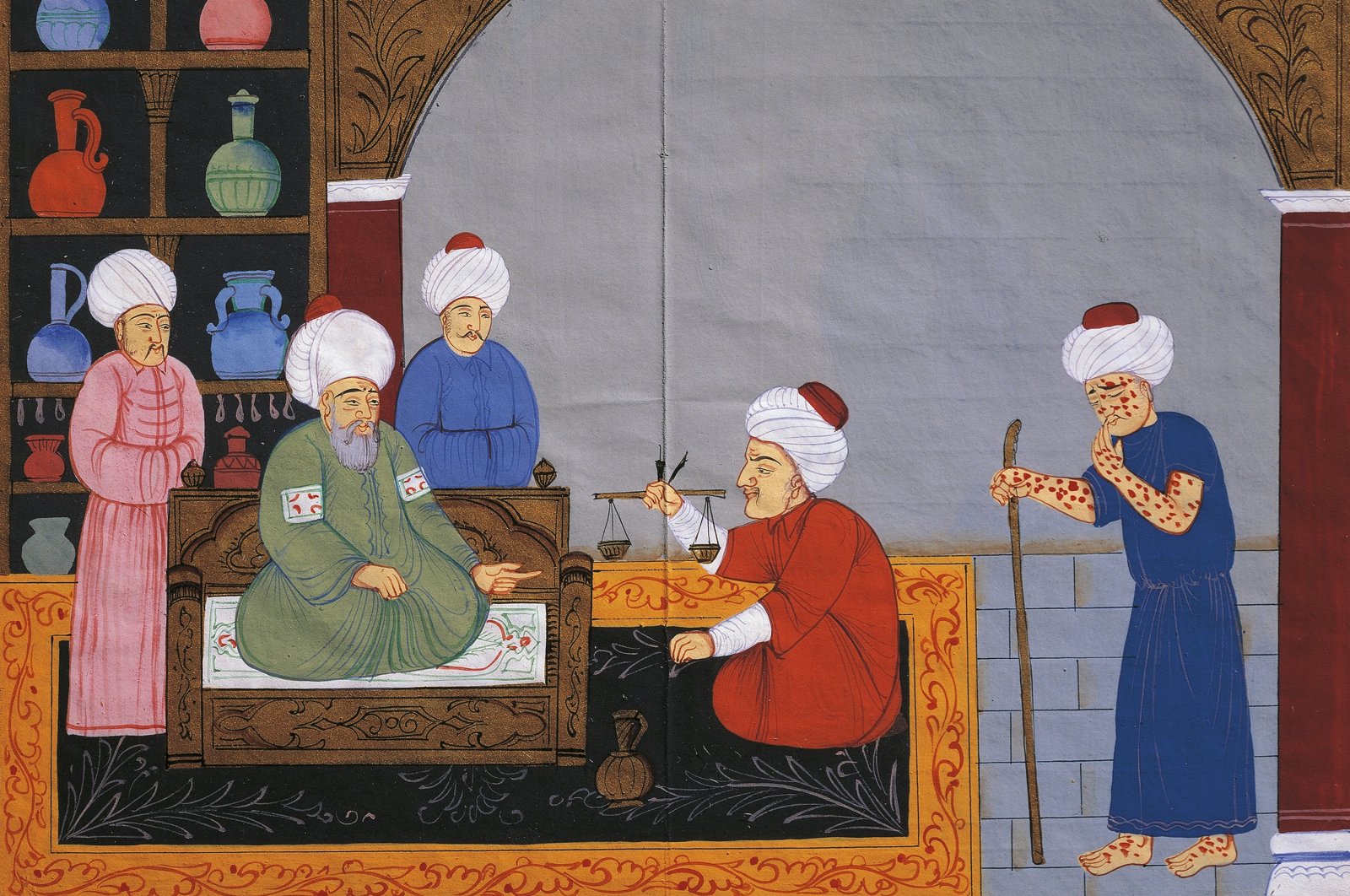 An Ottoman miniature depicts the preparation of medicines for the treatment of a patient suffering from smallpox by Ibn Sina (L), also known as Avicenna. (Getty Images)
by DAILY SABAH WITH AA Feb 24, 2021 4:43 pm

The first Sufi films festival in the world, the International 7 Saints 7 Cities Short Film Festival is being held for the eighth time this year. Focusing on seven Islamic scholars of seven provinces every year, the festival plans to honor seven distinguished scientists that have shaped the history of medicine during the Islamic Golden Age, which is traditionally dated from the eighth century to the 14th century, in its 2021 edition.

While the world continues to battle with the global COVID-19 pandemic, the International 7 Saints 7 Cities Short Film Festival has decided its theme "Physicians of the Great Age," dedicating its latest edition to health care workers around the world. The festival, organized by the Competent Art Cinema and Culture Association, is supported by the Ministry of Culture and Tourism's Cinema Department.

"We were worried that the festival would be lackluster because of COVID-19 last year. However, it was quite the opposite and was a really inspiring occasion. We had the screenings in a drive-in theater format," Sürmeli told Anadolu Agency (AA) and added, "This year, if the virus vaccinations are completed, we plan to hold the event in September much enthusiastically."

Sürmeli noted that like every year, this year too they have chosen a topic for the festival. This year, the movies will focus on seven Muslim pioneers in the field of medicine during the Islamic Golden Age.

"It is the golden age of the Islamic world and science. Europe called this period Dark Ages. We are featuring seven great physicians from this era. The reason for this is surely the pandemic and our heroes, the healthcare workers. We intend to give them moral support and show our appreciation with this year's festival," she added.

The film festival will be held in the western Bursa province, which was also the first capital of the Ottoman Empire before the conquest of Istanbul. Script entries to the festival, which feature these seven famous names as their subjects, will be accepted until May 1. Winners will be selected in seven categories and their scripts will be produced into films while also receiving monetary prizes.

The seven pioneers chosen for the festival include Ibn Sina, who is also known as Avicenna in the West. The Persian polymath is regarded as the father of modern medicine and one of the most significant physicians, thinkers and writers of the Islamic Golden Age.

Another is Iranian scholar al-Biruni. The renowned polymath is believed to be the first anthropologist and the father of modern geodesy. He was also well versed in physics, mathematics, astronomy and natural sciences.

Ibn al-Jazzar, a physician who rose to fame for his writings on Islamic medicine and was also the first to diagnose leprosy, is another subject of the festival.

The fourth scientist chosen by the festival is Ibn al-Nafis, another polymath who covered a wide range of subjects including medicine, surgery, physiology, anatomy, biology and philosophy. He was the first person to describe the pulmonary circulation of blood for which he has been called the father of circulatory physiology.

The other Muslim pioneer being recognized at the festival is Ibn Bajja, known in the West as Avempace. The Andalusian philosopher and scientist was famous for his writings in the fields of medicine, astronomy, physics, philosophy and botany. His writings on Aristotle are considered to be the first commentary on the philosopher in the Western world. His works influenced future astronomers and physicists in both Islamic civilizations and Renaissance Europe, including Galileo Galilei.

The fifth scientist from the Islamic Golden Age is Al-Zahrawi or Abulcasis. He was the founder of modern surgery whose principal work was the "Kitab al-Tasrif," a 30-volume encyclopedia of medical practices that became the standard textbook in Europe for the next five centuries with its chapter on surgery. He was the first physician to identify the hereditary nature of hemophilia, describe an abdominal pregnancy and discover the root cause of paralysis. The surgical instruments that he invented are still used by doctors today.

The last of the golden seven is al-Razi, whose Latinized name is Rhazes or Rasis. The Persian polymath, physician, alchemist and philosopher, who was one of the first people to use humoral theory, a system which details the makeup and workings of the human body to differentiate contagious diseases, and wrote a book on smallpox and measles where he provided a clinical characterization of these illnesses. He was a pioneer in pediatrics and ophthalmology and was the first to recognize the reaction of the eye's pupil to light.