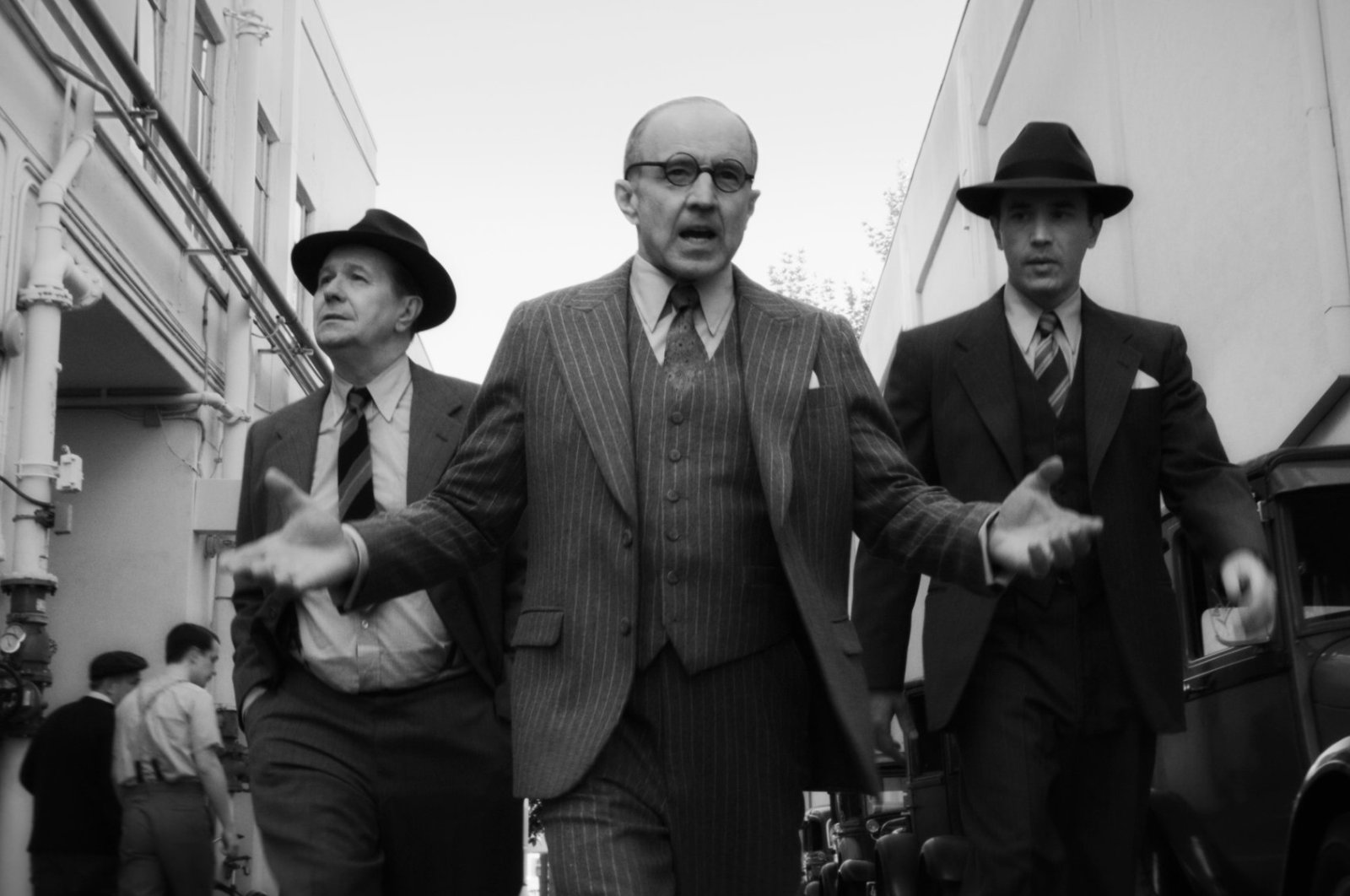 From left to right, Gary Oldman as Herman Mankiewicz, Arliss Howard as Louis B. Mayer and Tom Pelphrey as Joe Mankiewicz in a scene from "Mank."
by anees aref Jul 13, 2021 10:59 am

Netflix's 'Mank,' which topped the 2021 Oscars and Golden Globes nominations, is a black-and-white drama that dives into Hollywood's Golden Age with the making of 'Citizen Kane'

Hollywood is not a particularly nice place to be, at least according to many of its artists. Directed by the formidable David Fincher and credited to a screenplay by his late father Jack Fincher, “Mank” is a rather mysterious biopic about the career of screenwriter Herman J. Mankiewicz in the years leading up to and during his writing of the script for the legendary 1941 film “Citizen Kane.” Mankiewicz was co-credited to the film with director/star Orson Welles. Of course, “Citizen Kane" is widely acknowledged as one of the most important works in cinema history. It is also a movie whose authorship has raised some debate, if you believe the film circle gossip that has mounted over the years.

We meet Herman, or Mank, played by Gary Oldman, as he is recovering from injuries sustained in a car crash and trying to stay off the bottle. Holed up in a shack somewhere in old Victorville, California, Mank is currently hammering out a screenplay for “the great boy-genius from New York,” Orson Welles, played by Tom Burke. He’s attended to by two women, Rita, played by Lily Collins, a firm but diligent young Englishwoman who has a man serving in the British Royal Air Force battling Germans back home. There is also Fraulein Freda, played by Monika Gossmann, a German emigre who is rather accommodating towards Mank’s bad habits. Murmurs surround the work as it is rumored that Mank is writing an expose on the life of newspaper giant William Randolph Hearst, played by Charles Dance, and his girlfriend actress Marion Davies, played by Amanda Seyfried. The film then travels back and forth as it follows Mank’s earlier years as a contract screenwriter in 1930s Hollywood along with brother Joe Mankiewicz, played by Tom Pelphrey. Initially working at MGM during the heyday of studio head Louis B. Mayer, played by Arliss Howard and producer Irving Thalberg, played by Ferdinand Kingsley, Mank also manages to stumble his way into Hearst’s and Davies’ social circle, giving him a courtier’s view of both the kingdom and the Hearst grip on the movie studio machine.

With Mank as our eyes and ears, the Finchers make numerous points about how power operated in the movie business during this period. They also remind us of Hollywood’s relationship to politics. Much like today, those who ran the industry took the pro-establishment view, in spite of it being a so-called liberal town. The Mayer-Thalberg-Hearst attack on the writer-turned-political candidate Upton Sinclair shows how anti-socialist and anti-leftist the Hollywood elite really was and, in many ways, still is, at least when it comes to the dollar. This is a business, run by businessmen. We also watch as Mank’s career slowly unravels as he veers between his pen and booze. His wife Sara, played by Tuppence Middleton, remains almost inexplicably loyal amidst all this monkeying around, prompting Mank to ask “why do you put up with me?”

This is all fascinating stuff, yet I am still figuring what is behind all this, if there is a “rosebud” here. At one point Welles’s colleague John Houseman tells Mank: “What did the writer say? Tell the story you know...” to which Mank replies, “I don’t know that writer.” “Mank,” which led nominations to Oscars with 10 nods, can partially be read as a Hollywood cautionary tale in a vein similar to films like “Sunset Boulevard.” Mank suffers his penance for biting the hand that feeds you, as Welles also would. There’s a sense of impending doom overhanging the narrative as we watch Mank travel through this circus between the MGM backlots and the Hearst castle. Perhaps the film’s elusiveness is meant to reflect a theme of “Citizen Kane,” the difficulty of pinning down the meaning of an entire life in a two-hour film.

It is a curious turn for Fincher, whose career has delved into the dark labyrinths of serial killers, obsessive detectives, oddball loners and heroes thrust into Hitchcockian crises of suspense and terror. “Mank” falls into a subset of Fincher’s work which may include “Zodiac,” “The Social Network” and even “The Curious Case of Benjamin Button,” films which have explored alternative worlds, be it that of the past, the digital or the fanciful. In these works, Fincher seems to be interested in capturing a moment and its human implications, such as the effects of time on the reverse aging Benjamin Button or the social fragmentation wrought by the wannabe tycoons of Facebook.

“Mank” is a bit more mysterious upon the first impression. Perhaps it is exploring the dream world of the movies, providing an insider’s take on the corrupt forces that emerged both within and without it. Whatever Fincher is up to, “Mank” is beautifully made. The rich black and white photography deepens the film’s air of mystery, as does the ominous musical score by Trent Reznor and Atticus Ross. The period is artfully rendered. The script’s dialogue pops, at times evoking classic Hollywood patter. Oldman is excellent here. His Mank is bitterly funny, witty and seemingly drunk for half the film. He is surrounded by a very sharp supporting cast, particularly Charles Dance as the monarch-like Hearst, Seyfried as Davies, and Arliss Howard as a very stickler Louis B. Mayer.

Mank is a melancholy figure, trying to remain honest in a town built on illusions and illusory values. It is a curiosity why he and first-timer Welles went after Hearst for this particular project, a question the film to some degree attempts to answer. Welles himself comes off a mixed bag, shadowy, egotistical, charismatic, as the real Welles seemed to be in many ways. Further investigation and repeat viewings may be needed to get at what “Mank” is after.