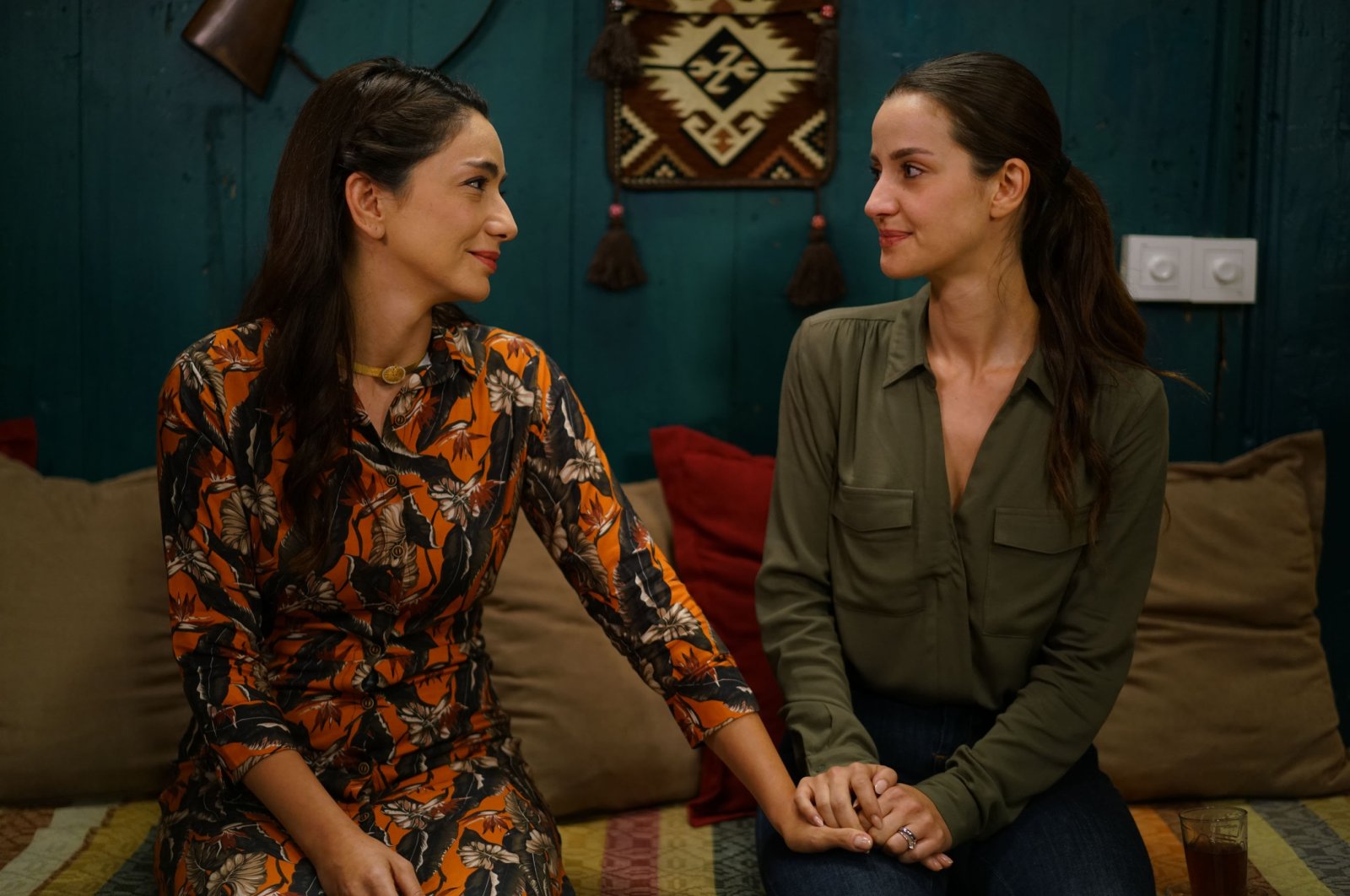 For the past three decades, I have been working with girls and women and helping them find their voices and heal from sexual abuse in America. Twenty years ago, while working on the first edition of my book “Invisible Girls: Speaking the Truth about Sexual Abuse” with my therapy survivor group in Brooklyn, New York, I asked the teen girls what names they would choose for themselves with their stories of abuse. One girl after another said, “Let us be flowers! Heather, Daisy, Iris, Ivy, Jasmine, Dahlia, Rose.”

Twenty years later, watching the Turkish television series “Sen Anlat Karadeniz” (“Lifeline”), I have witnessed that the survivor in the series goes on a radio show to share her journey from abuse to recovery and invites girls and women to call the show with their abuse stories. She tells them her name is “Blue Feather,” and they can name themselves flowers when they call in. And they do, introducing themselves as Chrysanthemum, Rose, Daisy, Orchid, et cetera. Never has a piece of art moved me as much as this Turkish series. And although this series can be triggering for abuse survivors because of the scenes of violence, it is a beacon of hope and awareness for everyone else to understand and fight abuse of girls and women.

“Sen Anlat Karadeniz,” which was broadcast on Turkish TV channel ATV, is about a young woman who has been a victim of the most vicious sort of domestic violence and who then manages to escape after eight years and 22 attempts. But, like the Turkish drama "Hercai," what makes the series impeccable is its deep study of psychology.

First of all, the two female writers of the series, Ayşe Ferda Eryılmaz and Nehir Erdem, have taken on issues of domestic violence, sexual abuse, incest, rape and femicide with such intelligence, wisdom and grace. They have woven a magnificent tapestry of love and hate, abuse and healing, feminism and misogyny, torture and redemption, torment and romance, depression and resiliency, motherhood and fatherhood, religion and faithlessness, and more.

In addition to excellent writing, there is also stunning acting that also brings much laughter, celebration and joy to the series. The characters are all brought together by an exceptional ensemble cast with depth and multilayered portrayal. Female characters have an agency that shows up in their professions, religious commitments, devotion to family, mostly, in their unwavering sisterhood. Many of the male characters show a depth of thought and feeling while we witness their struggle to balance their emotions with their instilled macho behaviors. “Sen Anlat Karadeniz” explores manhood from the vilest to the most sublime. The soundtrack and Turkey’s Black Sea region are also the organic cast members, bringing emotions to a peak while we are experiencing the feelings of the characters with music matching the vastness of the Black Sea symbolizing re-birth, the womb, fluidity, healing and the unconscious. You can almost smell the salt air and feel the water wash over you.

At the core, this is a story about the triumph over abuse and the deep resiliency of love, healing and the strength of women. We are shown all of this through the heroine named Nefes. Nefes is every woman who has suffered the unspeakable; she is a survivor; she has strength that feels incomprehensible. Her mother died giving birth to her, and her father sold her to an abuser named Vedat when she was just 16 years old. Vedat is portrayed as a conglomeration of every abuser, a sociopath without a conscience, a twisted narcissistic bully who through his economic privilege believes he is entitled in every way. He is vicious, dangerous and delusional.

After her abuser brutally rapes her, Nehir gives birth to her son Yiğit. Nefes is a powerful fighter, and because in Turkey, at a wedding ceremony she has the right to say no to legally marrying Vedat, she uses this one power that, although trapped with him, she never legally marries him. She is a warrior mother who never gives up hope of escaping their prison and saving her son from this life. Let’s look at her external and internal escapes from a psychological perspective.

We then meet Nefes again when she is 24 years old and with her beautiful loving 7-year-old son Yiğit. That is, she has spent eight years in captivity although she has tried to escape 22 times. Within this imprisoned life, Nefes’ first escape is an external one where she has created a fantasy world where she calls herself “Blue Feather” and Yiğit “Howling Wolf at the Moon.”

She says, “Violence and pain cannot enter this world.” She turns her torture prison into an imaginative adventure scape where they wear headdresses, rides bicycles around the compound of their house, drinks magic potions and rescue animals in the circus.

Simultaneously, we also meet the Kaleli family who owns a shipping sand company as they arrive from Trabzon province in the Black Sea to do business with Vedat in Istanbul. This is when the two families’ stories collide. During a transport between the Kaleli family and Vedat, Nefes hides in the trunk of Tahir Kaleli’s truck, on her 23rd attempt to escape. When the Kaleli family arrives home after the long drive, Tahir opens his trunk to find Nefes and Yiğit huddled together. Tahir, who is the hero of the story, is an astute study of maleness that defies toxic masculinity. He is brave and impulsive yet deep and caring; he immediately offers his unfiltered protection to Nefes and Yiğit.

The life and death danger ensues as Vedat finds them and brings 30 men with guns to force Nefes and Yiğit to return. Trapped in the mountains to either jump off the cliff hundreds of feet into the Black Sea or go back with Vedat to a life of horror, Nefes takes Tahir’s hand as he holds Yiğit tightly, and they jump off the cliff into the Black Sea. They survive the plunge and that is when Yiğit names Tahir “Tiger From the Sea.” Thus begins the epic relationship of Tahir, Nefes and Yiğit, always followed by the shadow of danger and possible death at the hands of the monster Vedat. But “Crazy Tahir,” as he is affectionally known, has blind courage and pushes forward.

When it comes to Nefes’ internal escape from such violent, abusive life, she uses dissociation, which is a brilliant way that a survivor removes herself emotionally from the abuse to withstand it. Nefes describes herself in floating motions in a white dress blowing with the breeze as she steps through the water of the sea. She also sees herself on a swing floating through the air. These are the places Nefes goes when she is being raped by her abuser. She says she will be anywhere except in the bed she is being abused in. Nefes has built ulterior external fantasy worlds and internal worlds to escape her torture chamber with Vedat.

Time goes on and in spite of the dangerous shadow of Vedat, Nefes begins to remap her life. She rejoices and says, “I will take bad memories and replace them with good memories.” This is called remapping when a survivor replaces trauma with a positive experience and takes back her power. She wears blue because Vedat loved her wearing white; she stops wearing make-up as Vedat always had her wear make-up to cover her bruises; she plays soccer with abandon since her father never let her play; she rides bicycles through endless paths after being trapped in the compound for long years. Finally, she marries a man she loves.

As she heals, she transforms her magical fantasy world of survival into a beautiful creative grounded reality, making strong loving connections. One of those vital connections is with the hero of the story Asiye, Tahir’s sister-in-law who is filled with pizzazz and agency, and is a fierce protector of Nefes and Yiğit. She becomes Nefes’s spirit sister.

Nefes also embraces the Islamic faith with the wonderful imam who is Asiye’s father and a loving father figure to Nefes. Osman Hodja is a gentle strong spiritual leader who speaks in poetry and shows us beautiful Islamic rituals. Nefes also gets support and sustenance from many women in the community.

Finally, the spectacular loving relationship develops with Tahir, Yiğit and Nefes. Yigit knows his spirit father the moment he sets eyes on Tahir, and Tahir has pure love for Yiğit. Nefes also trusts Tahir, and we watch her fall in love with Tahir who is ever so tender, patient and understanding. She embraces her supportive sisterhood of women and then gives birth to another child – this time a love child. Through her romantic love, Nefes learns intimacy, to trust again, to share parenting, and more. This is not a story about how everyone saves Nefes, it is how Nefes embraces love and saves herself, and then gives so much to those around her.

Through Nefes and other female characters in the series, we understand how strong women are, how clear they are that they never deserve to be abused. Mostly, we watch Nefes remap her life and heal. And eventually, she becomes an advocate for other women as she goes on the radio as Blue Feather and tells her story. When she asks women to call in with flower names and tell their stories of abuse, other survivors also call. When they tell their stories and stop hiding, they let go of unwarranted shame and guilt and begin to heal. Nefes becomes a warrior for all girls and women, and Tahir follows her. Nefes and Tahir and Asiye and others become allies in the fight against violence against women.

The story ends with Nefes, Tahir, Yiğit and their baby daughter Masal loading up the truck. Nefes remaps her life from hiding in the trunk of that truck with her son on the drive from her imprisonment in Istanbul two years earlier, to driving back to Istanbul two years later with her son, daughter and husband to begin her studies to become a social justice lawyer. Nefes is no longer only a mother warrior, she is a warrior for all women. And Tahir opens the path with vigor for Nefes to spread her wings. “Sen Anlat Karadeniz” deserves credit for its bravery in showing us in spite of what seems impossible there is always hope that women can triumph over abuse.